Economic inequality has exploded in recent decades—globally, in Canada and here in BC. Much of our concern about inequality has focused on the growth of extreme disparities between the incomes of the very rich and those of us on the middle and lower rungs of the income ladder. But there’s been much less focus on the related problem of wealth inequality.

Wealth—or net worth—is the sum of all individual or family assets (house, car, financial investments, etc.) minus all debts (mortgage, credit card, student loan, etc.). In other words, what a household would have after selling all assets and paying all debts.

The work of French economist Thomas Piketty, and his weighty tome Capital in the Twenty-First Century, has helped put the issue of wealth inequality on the agenda. Piketty argues that returns to capital ownership are outstripping economic growth itself. In other words, those who make money from their existing wealth—rather than those who make money from their labour—are amassing a growing share of global wealth.

This is neither socially nor economically justified, Piketty explains.

“Fortunes can grow and perpetuate themselves beyond all reasonable limits and beyond any possible rational justification in terms of social utility. Inevitably, he says, “entrepreneurs thus tend to turn into rentiers, not only with the passing of generations but even within a single lifetime, especially as life expectancy increases.”

This view dovetails with recent findings from the OECD and IMF, which have begun to sound the alarm about the damaging effects of inequality on economic growth.

The typical top-10 BC billionaire is 5,845 times wealthier than the typical BC household.

When it comes to wealth inequality in BC, there’s plenty to be concerned about—25 billion reasons to be concerned in fact. That’s the combined net worth of the 10 wealthiest families in BC. Together, they have the same wealth as the bottom 1.32 million British Columbians combined, more than a quarter of the province’s population. In fact, your typical top-10 BC billionaire is a whopping 5,845 times wealthier than the typical (median) BC household.

Let that sink in for a minute.

We compiled these figures on the wealth of the 10 richest BC families using information from Canadian Business magazine and data from Statistics Canada’s Survey of Financial Security. (This analysis follows a national CCPA report published earlier this year examining the wealth concentration among Canada’s 87 wealthiest families.)

Canadian Business publishes an annual feature, “Canada’s richest people,” which assembles the net worth on the 100 richest individuals and families in the country. The Survey of Financial Security is conducted periodically by Statistics Canada, with data for 2016 being the most recent available.1

As noted, the 10 wealthiest families in BC together held $24.9 billion in net worth. The typical British Columbia family (the “median,” right in the middle of the wealth distribution) has a net worth of $429,400. In contrast, the median of the 10 billionaire families has a net worth of $2.51 billion.

Furthermore, these richest 10 families increased their net worth by an average of $299 million each between 2012 and 2016, dwarfing the gains of other BC families, even those who are relatively well off (see figure below).2 The total wealth of the 10 richest families rose by about $3 billion over this period. 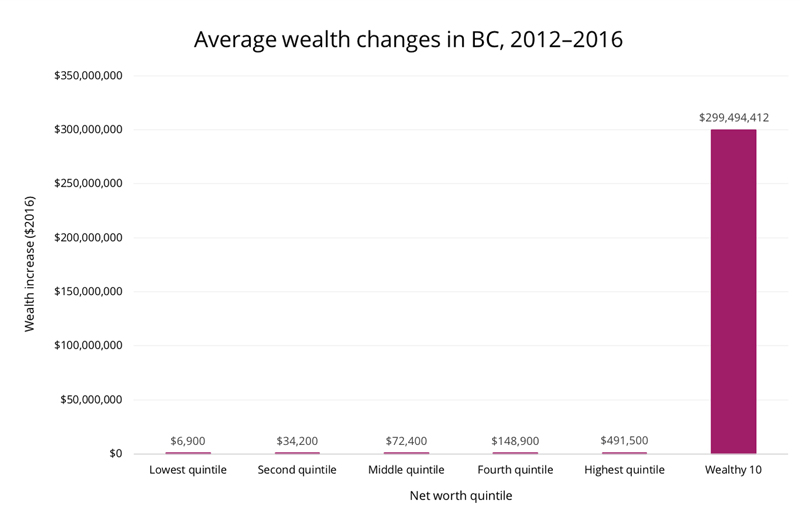 Who are the top 10 wealthiest British Columbians?

The top 10 wealthiest BC families include some familiar and less familiar names—see the table below.

In addition to their extreme wealth, BC’s wealthiest families have other things in common. First, much of their wealth is inherited. Seven of the 10 fortunes are in their second generation or more, which means those billions aren’t solely the result of hard work or earned success. They’re a result of privilege—being born with the proverbial silver spoon in your mouth.

Why does extreme wealth inequality matter?

Some would say these disparities in wealth are nothing to worry about, that raising concerns about them is a case of envy or that such inequality is inevitable.

Extreme inequality is not inevitable and does have important implications.

First, it’s a reminder that we are one of the richest societies in the world. We are often told it would be far too costly to tackle urgent problems like the climate crisis, the housing affordability crisis or poverty and homelessness. In reality, our province is enormously wealthy, but we’ve allowed this wealth to be amassed by the richest few. We outline solutions below for this state of affairs.

International evidence also shows that inequality is corrosive for society and is associated with a host of negative social outcomes. This research shows that countries with more income inequality are likely to have lower life expectancy, worse health outcomes, higher crime rates and lower levels of social trust. These outcomes appear to be worse up and down the income scale—not just for the poor—suggesting that inequality is bad for everyone, including those who are better off.

Public confidence in political institutions and “political classes” is in long-running decline across the developed world. Political instability is on the rise, along with right-wing populist movements that promise to save the middle-class by scapegoating vulnerable groups. If a bold agenda tackling massive inequalities in wealth and power is not advanced, these more ominous political forces seem poised to fill the vacuum.

What can we do about extreme wealth inequality?

Strikingly, public policies have often made the growth and persistence of wealth inequality worse rather than better.

BC saw a significant erosion of tax fairness over the past two decades and Canada’s tax system privileges income from owning capital compared to income earned from work. For example, capital gains are taxed at half the rate of labour income and generous tax credits apply to dividends paid by Canadian corporations to their shareholders. Canada is also the only country in the G7 without an inheritance tax, which allows vast fortunes to be passed along from one generation to the next.

The CCPA has called for an inheritance tax of 45% on estates over $5 million, which would bring Canada in line with the rest of the G7.4 Only about 1.8% of BC families have net worth over $5 million. An inheritance tax of this type would both reduce inequality and raise $2 billion per year nationwide, which could be used to make crucial public investments that benefit everyone. Investments in services like health, education, child care and housing are great equalizers, ensuring everyone’s needs are met effectively and efficiently, levelling the societal playing field and binding us together.

The CCPA has also proposed closing numerous tax loopholes that overwhelmingly benefit the richest 10% of Canadians, such as the special treatment of capital income. This would raise billions of dollars more per year federally and provincially.5

In BC, we’ve long called for progressive property taxes that would require the wealthiest landowners to pay more. Doing so would make our property tax system fairer—especially since the rising value of urban land is created collectively by all of us (through public investments in infrastructure like parks, schools and transportation). This year, the provincial government took some important steps that will help capture more of this massive land value for the public good, including the Speculation Tax and additional School Tax on residential properties over $3 million. These new taxes are narrowly targeted, requiring only 1–2% of the wealthiest property owners to pay more. To tackle BC’s inequality in real estate wealth though, more needs to be done to reshape the property tax system along progressive lines.

Taken together, our recommendations would go a long way to reduce the damaging levels of wealth concentration in this province and country. To find a path out of what is an increasingly frightening political moment around the world, we need to act decisively against extreme inequality. This is also an opportunity to take back control and harness our enormous wealth for the common good.