By Alex Hemingway and Michal Rozworski

When you add up the total wealth growth of Canada’s richest 20 billionaires since the March 2020 COVID-19 lockdown, their wealth has ballooned by $37 billion.

Data from Forbes’ annual billionaires list and their “real-time billionaires” listing shows that Canada’s top 20 billionaires have amassed an average of just under $2 billion in wealth gains during some of the most economically catastrophic six months in Canadian history. This reflects the increasingly clear decoupling of the stock market from the real economy.

Some did better than others, with the biggest gains going to the Thomson family fortune (an estimated $8.8 billion increase in wealth), followed closely by Shopify’s Tobi Lutke ($6.6 billion increase)—mirroring some of the huge gains among big tech firms like Amazon and Apple south of the border. Lululemon founder Chip Wilson has also done exceptionally well, with a nearly $3 billion gain.

At the same time as billionaires like Loblaws owner Galen Weston have seen their wealth balloon, front-line workers stocking shelves and scanning groceries at his stores have continued to risk their health and that of their loved ones by coming into work.

We also examined the difference between billionaire wealth now and last year’s Forbes report (a snapshot of Feb. 8, 2019), since some on the list saw their wealth temporarily drop when stock markets tanked in the lead up to this year’s March 18 reporting date. No need to worry about Canada’s billionaires, however: the top 20 have still collectively amassed over $28 billion in wealth gains compared to 2019. With these increases, the top 20 billionaires’ total wealth now stands at $178 billion. 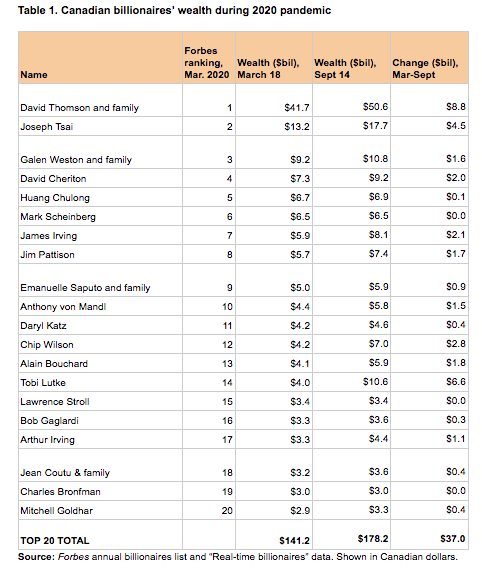 Meanwhile, workers in Canada continue to bear the economic consequences of the crisis. In the latest labour force data, 1.1 million fewer people were employed in Canada compared to pre-COVID levels and another 713,000 workers were technically employed but have lost half or more of their usual hours due to the pandemic, with a total of 1.8 million jobs affected.

While the situation has improved from its worst level of 5.5 million impacted jobs in April, the pace of recovery is slowing. Indeed, the recovery in total work hours stalled between July and August, even as some improvement in jobs numbers continued.

Low-wage workers have been hit hardest, with employment among those making less than $16.03 per hour still substantially below the pre-pandemic level (87.4%), while the highest wage groups have recovered to pre-pandemic employment levels. As Statistics Canada data show, women and racialized Canadians are overrepresented among low-wage workers.

Low-wage, frontline workers have been putting themselves in harm’s way to keep our cupboards stocked with groceries and essentials, to keep the lights on and to care for children and the elderly. Public support for these newly recognized essential workers led to a brief $2/hour “pandemic pay” increase for many. But this was short-lived and quickly clawed back in early June by companies owned by the very billionaires on the top 20 list.

Low-wage workers have been hit hardest while the highest wage groups have recovered to pre-pandemic employment levels.

Galen Weston’s (#3 on the list) Loblaws grocery and drug store chain saw its shares rise after they instituted the pay cut for workers in June. When Jim Pattison’s (#8) grocery chains cut back pandemic pay at the same time, he told reporters that he was “not involved” in the decision, while conceding that “we own and finance the company.” Several corporate executives in the grocery industry were grilled by members of Parliament about these decisions in July, but they did not restore the pandemic pay and insisted they hadn’t coordinated when they instituted the cuts at nearly the same time. The message, however, was clear: increases in the value of these companies were intended for the pockets of their owners, not their workers.

In a CCPA-commissioned poll of British Columbians conducted in late May and early June, there was strong public support for measures that would effectively override the billionaires to back these workers, with 59% of respondents supporting an “increase in the minimum wage for all frontline retail workers to $20/hour immediately.” There was also overwhelming public support for requiring all employers to provide paid sick leave for their workers (77%) and increasing health and safety protections for all workers (83%).

The temporary expansion of EI and the proposed Canada Recovery Benefit are a welcome lifeline for unemployed workers but recipients are facing cutbacks while billionaires prosper, since benefits are being reduced by 20% relative to the CERB. The new benefits floor of $400 per week is well below the poverty line for single persons living in most areas of the country and, in particular, in urban centres.

In past crises, Canada and other countries increased taxes on the income and wealth of the richest as a way of fairly spreading the burden of reconstruction and recovery. Today, Canada must get serious about taxing the rich to reverse the rise of extreme inequality, to start to undo the concentration of economic and political power, and to create ongoing revenue streams to fund badly needed public investments for the long-term.

At a time when Canada’s richest 1% controls 26% of our wealth, and when billionaires hold 4,448 times the wealth of the typical family, both an emergency, one-time excess wealth tax and an annual wealth tax should be on the table.

In past crises, Canada increased taxes on the income and wealth of the richest to fairly spread the burden of reconstruction and recovery.

As we have argued elsewhere, taxing wealth is enormously popular. Achieving it is within reach, with enough organized public pressure from below. As a growing body of research shows, the key barriers to instituting wealth taxes are not technical nor economic—they are a matter of political will.

A wealth tax needs to be combined with other measures, including a major crackdown on tax havens, corporate tax reform, and equalizing the tax treatment of capital gains income.

Canadians are frequently told that “we’re all in this together” when it comes to the COVID-19 crisis. There is some truth to this—ultimately, anyone can get sick. However, the explosion in the wealth of billionaires illustrates how the crisis has only magnified the ways in which a wealthy minority lives in a very different world.

Billionaire wealth has bounced back and expanded by billions of dollars while millions of Canadians struggle with the consequences of the pandemic.

Meanwhile, even greater challenges, like the climate crisis, loom on the horizon. The economic and social arrangements that produce these outcomes are not laws of nature; they are the predictable results of policy choices. We have the power to make different choices. There’s rarely been a more important time to exercise it.

In a society as unequal as Canada, it is unfortunate how little official data is collected on the fortunes of billionaires and the super-rich. Magazines with lists of the rich, like Forbes and Canadian Business, provide some of the only data available on these groups. Even the Parliamentary Budget Office had to rely on data from the Canadian Business list in developing its recent re-estimate of the wealth distribution in Canada. While these data are imperfect, they are the best available. In terms of shorter-term tracking, only Forbes provides publicly accessible data on Canadian billionaires through its “Real-time billionaires” list, which is why this source is used for the analysis here of wealth change during the pandemic. The fact that there is so little official, systematically collected, and publicly available data on these matters is a sign of how little is currently being done to rein in out-of-control billionaire wealth.

Wealth in this analysis is displayed in Canadian dollars, converted using current exchange rates from the US dollar amounts that Forbes provides. 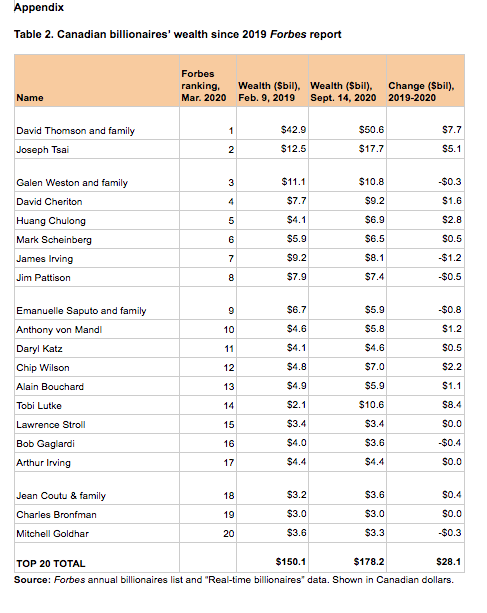 A wealth tax on the super rich is within reach

Michal Rozworski is a researcher at the British Columbia Teachers' Federation and a CCPA-BC research associate. He publishes frequently on Canadian political economy and is the co-author, with Leigh Phillips, of The People's Republic of Walmart. Follow Michal on Twitter