The coronavirus pandemic has put governments and societies around the world to the test as they confront what is both a public health and economic crisis—one that clearly is not going away anytime soon. BC has fared well to date in containing the spread of the virus, and stands out among Canadian provinces with a relatively strong package of economic and social policy measures.

So what do British Columbians make of the provincial government’s response, and what do they think BC’s recovery plans should look like? A newly-released survey commissioned by the Canadian Centre for Policy Alternatives sheds light on these questions. The online survey of 2,289 BC residents was conducted by McAllister Research from May 16 to June 1, 2020.

Overall, the results show that a strong majority of British Columbians have a positive view of the province’s handling of the crisis, and believe further government action is key to a successful recovery. But large numbers of people are also worried about the pandemic’s impact on their own and others’ wellbeing, and these concerns follow existing patterns of inequality in BC. 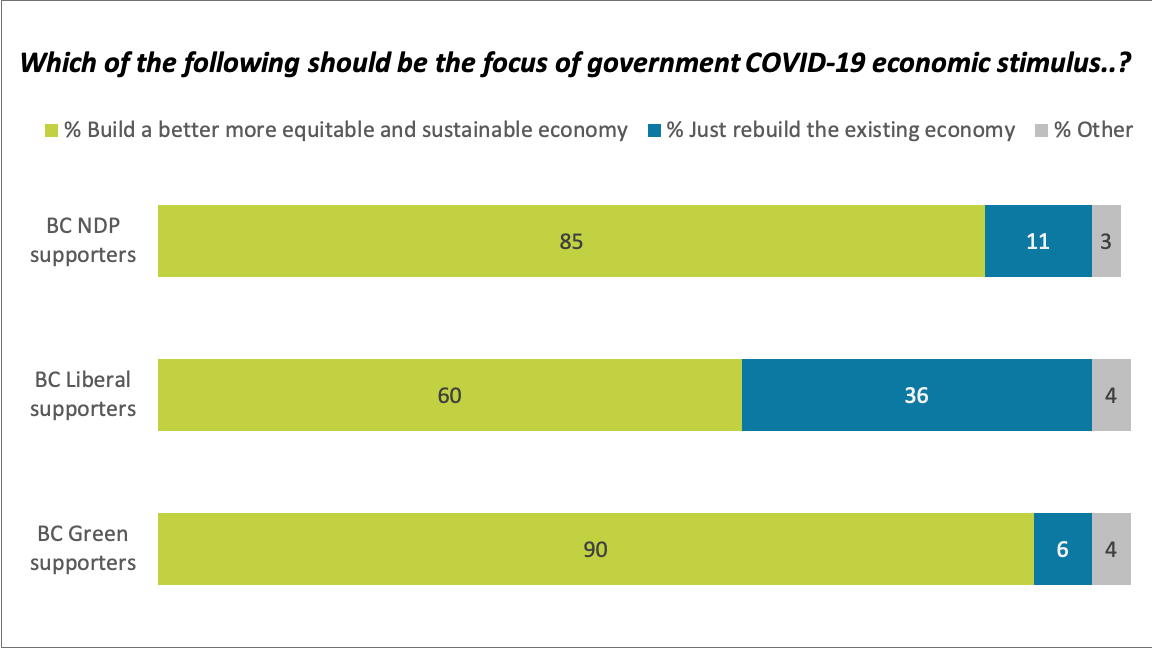 Three quarters of respondents (73 per cent) want governments to  “build a better, more equitable and sustainable economy” after the pandemic versus “just rebuild the existing economy.” Younger men (18-34 years old), and women of all ages are particularly likely to be supportive. Strong majorities express a preference for this approach across all regions of the province and among supporters of all three major political parties.

Similarly, nearly eight in 10 British Columbians want governments to make public services more accessible (79 per cent), and seven in ten support increased taxes on wealth and corporate profits to pay for the costs of COVID-19 (71 per cent). On both counts, majorities of decided voters support these actions across partisan lines.

British Columbians want governments to enhance COVID-19 supports, including strong measures to protect the most vulnerable—but balk at the idea of tax cuts for large corporations

As the provincial and federal governments continue to navigate the immediate impacts of the pandemic, British Columbians resoundingly support the continuation and expansion of a wide range of economic and social supports—from universal public seniors care, to requiring employers to provide paid sick time, to raising social assistance rates above the poverty line. In contrast, most oppose cutting taxes for large corporations (with only 17 per cent in support).

Further, as measures to limit the health risks of COVID-19, 70 per cent of British Columbians support a continuation of the rent freeze and ban on evictions, and 58 per cent support the use of empty hotels to house the homeless. The provincial government announced last week that the ban on evictions for non-payment of rent will end September 1. (The next report from our survey will take a close look at the experiences of renters during the pandemic, including those struggling to make rent.) 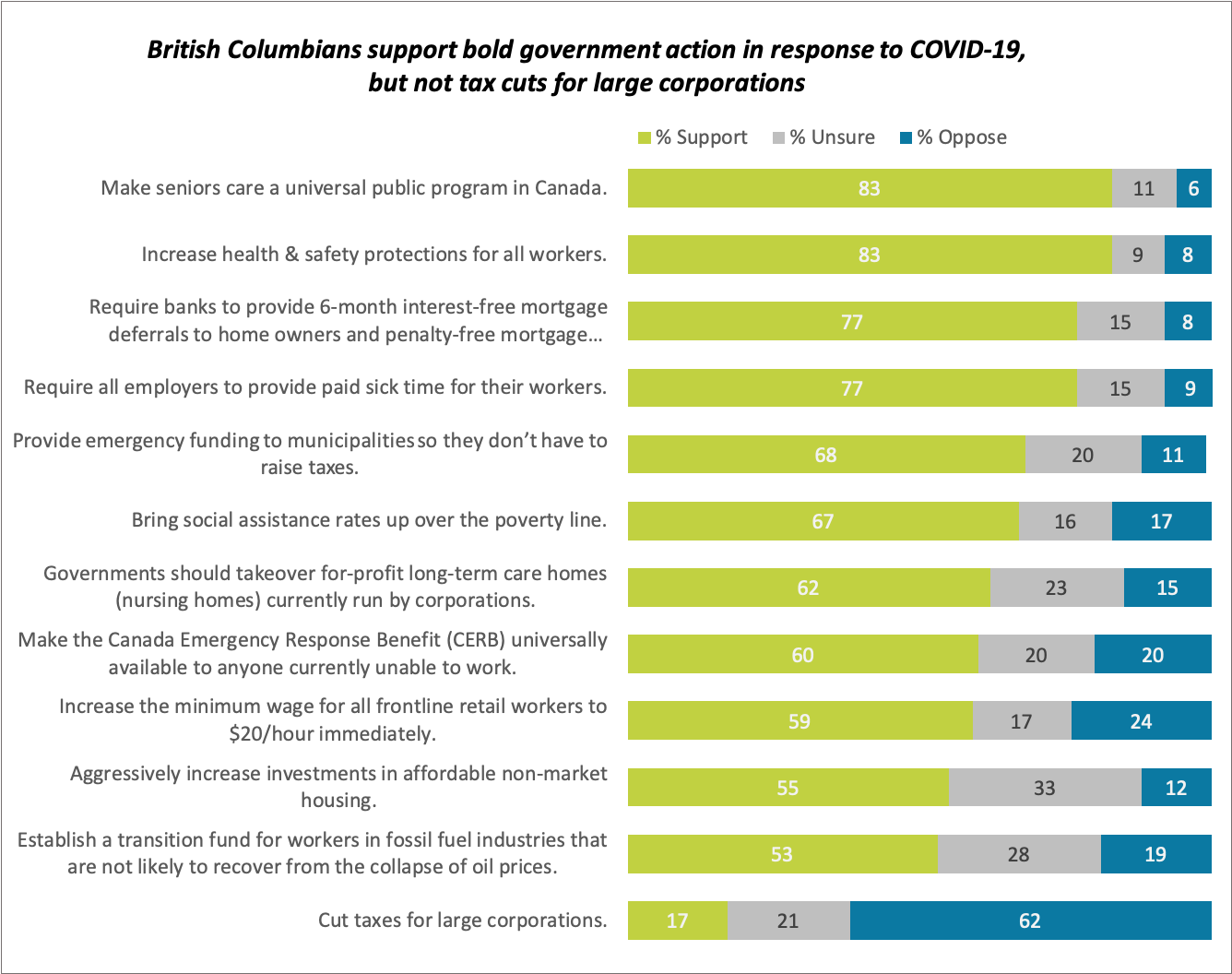 More than 3 in 4 British Columbians think the province as a whole is on the right track (77 per cent), and they have positive impressions of both the provincial government’s (71 per cent) and Dr Bonnie Henry’s (80 per cent) handling of the pandemic.

Approval varies among decided voters, with NDP followed by Green voters most likely to hold positive views, but is notably strong across voters for all three major parties — 69 per cent of decided Liberal voters say the province is on the right track and 60 per cent have a positive impression of the government’s pandemic response. 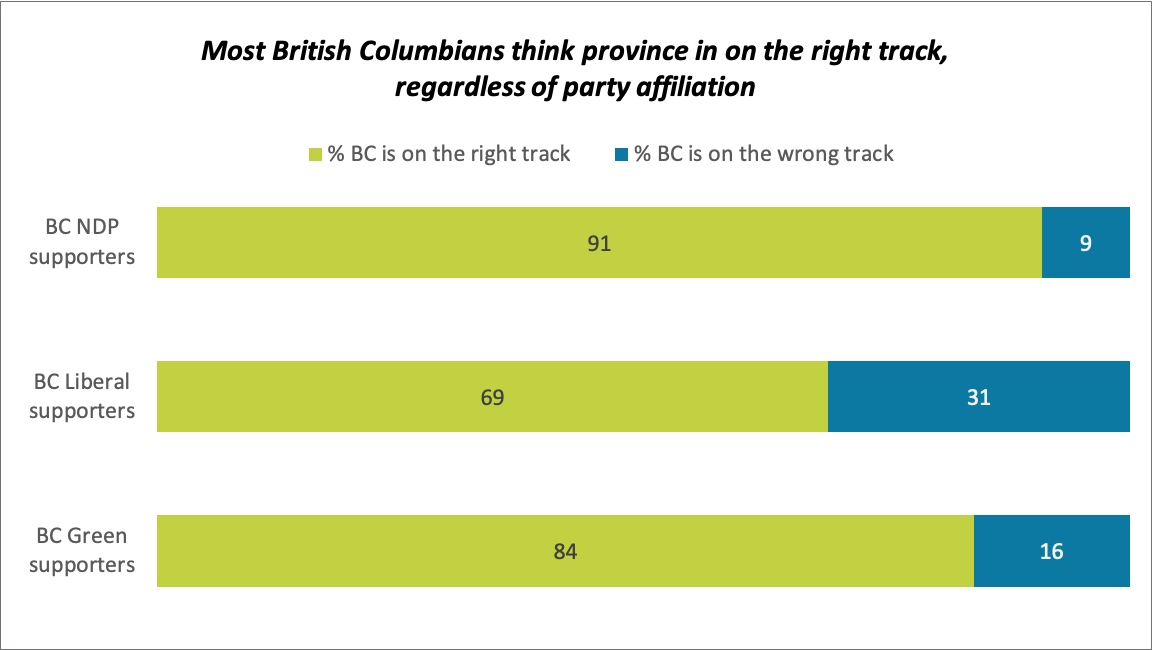 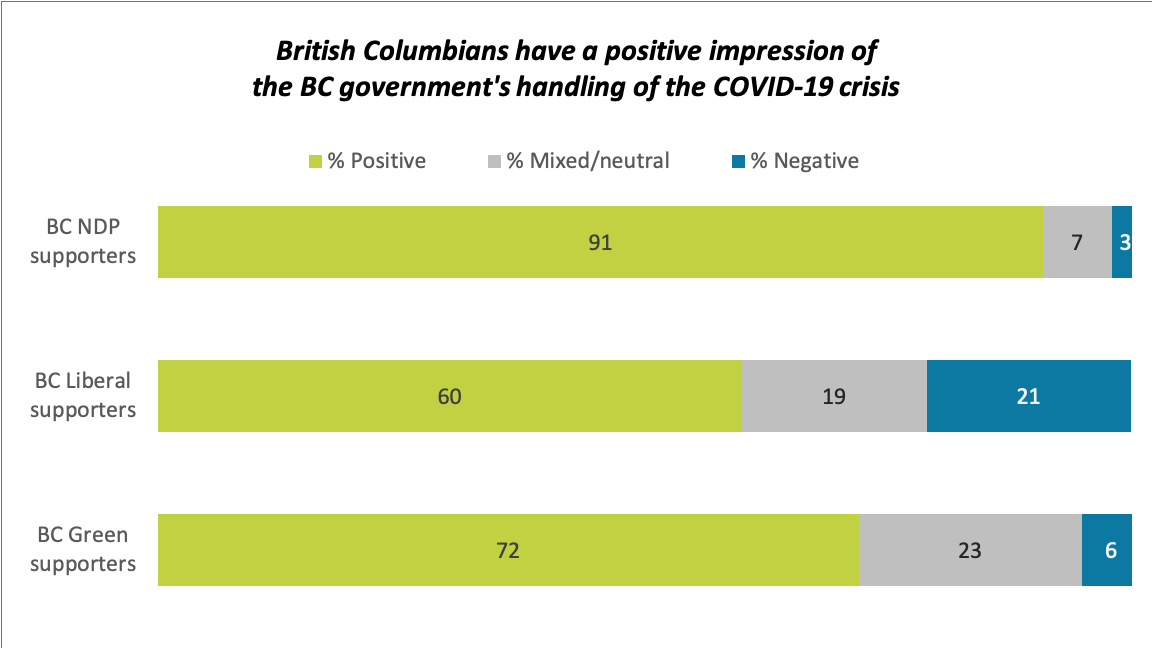 Consistent with other recent polls1 conducted in May and June, a majority also have a positive impression of the federal government’s handling of the crisis, but at a lower level of 55 per cent.

Our survey responses were collected just as the province was entering phase 2 of its reopening plan (in late May and early June). Most British Columbians indicated support for a gradual reopening while monitoring the impacts to ensure the vulnerable are protected (70 per cent). Small minorities felt the economy should be opened up immediately while trusting people to do the right thing (15 per cent) or conversely that the economy should not be opened up anytime soon as it is not yet safe to do so (13 per cent).

Large numbers of British Columbians are worried about the pandemic’s impacts on themselves and others, but these stresses are unequally distributed

Survey respondents report high overall levels of concern for the wellbeing of others. A majority say they are concerned about the pandemic’s impacts on:

Respondents with lower and middle household incomes (under $100k) are significantly more likely to be concerned about collective wellbeing compared to those with higher incomes (over $100k).

Large minorities of British Columbians are worried about the pandemic’s impact on their own personal situations, reporting concern about their own:

The extent to which peoples’ incomes have been impacted by the pandemic shapes their level of concern about both collective and personal wellbeing. Those who’ve experienced a total loss of income due to COVID-19 are more worried across the board compared to those who have experienced a partial loss, anticipate a future loss, or have had no loss — the less income impact from COVID, the less worried people are likely to be.

People with lower annual household incomes (under $40k) are most likely to be concerned about their own personal situations, but a notable exception is with respect to child care support, where concern is evenly spread up the household income ladder to $100k. Concern about the pandemic’s impact on child care support is also surprisingly evenly spread across gender and age.

Renters are more likely to be concerned about their financial situation, followed by homeowners with a mortgage (compared to owners without a mortgage).

A similar pattern holds for concern about one’s own mental health — and differences by housing status are more striking than differences across income groups.

People working part-time jobs, those who rely on disability income, students, and those who are unemployed are also more likely to be worried about their mental health compared to those with full-time work, run a small business or who are retired. These same groups are also most likely to be concerned about the pandemic’s impact on their ability to obtain adequate food or groceries.

Concern about personal health and safety is significantly higher for women of all ages compared to men, while concern about one’s own mental health is especially high for younger women age 18-34, followed by both men and women age 35-49.

While there is some regional variation in pandemic-related concerns, these are much less striking than the socio-economic differences highlighted above.

Overall, these responses reveal a great deal of pandemic-induced stress (though we do not have pre-pandemic baseline numbers to compare to), and the ways the pandemic is deepening existing inequalities. They also point to where government interventions have had an impact and make the case for both the federal and provincial governments to extend COVID-related economic supports as long as the pandemic continues.

The strong message from a majority of British Columbians is that they want governments to focus recovery efforts on building a more equitable and sustainable economy rather than simply returning to a pre-pandemic old normal.

This post is the first in a series looking at results from a comprehensive survey of British Columbians about their experiences of the pandemic, and is part of an ongoing research project funded by the Vancouver Foundation.

Survey results are based on an online survey of 2,289 English-speaking B.C. residents aged 18 years or older, fielded May 16th to June 1st, 2020, inclusive. Respondents were recruited using a mix of proprietary online outreach and intercept techniques which accurately replicate a cross-section of the B.C. population. Quotas were applied to ensure that sample parameters for education and ethnicity were aligned with the latest Statistics Canada estimates. Weighting is applied to the data according to estimates for region, age and gender. The precision of these survey results is measured using a Bayesian credibility interval.  At a 95 per cent confidence level, the credibility interval for the total sample is +/-2.3 per cent.  The calculations for the credibility interval account for regional oversampling and a design effect of 1.228.

You can read the top-line survey questions asked here.

A progressive macroeconomic response to the coronavirus crisis in British Columbia