The economic impact of the shutdown of large parts of BC’s economy in response to COVID-19 has reflected a sharp recession: a massive and rapid increase in involuntary unemployment, including layoffs, job losses and reduced hours; reduced household and business income and expenditure; closures (whether mandated or not) or greatly reduced capacity of many retail businesses and public and private service industries.

Between May 16th and June 1st of this year, just as restrictions were being lifted in BC and we were entering Phase 2, we commissioned McAllister Research to conduct an online survey of 2,289 British Columbians that asked questions related to people’s economic circumstances, how they had fared during the shutdown, their attitudes about the future and the impact of government supports. Our sample is larger than the typical provincial poll, allowing us to consider impacts across regions, age and gender, employment and housing status.

It’s no surprise that the COVID shutdown adversely affected the economic fortunes of British Columbians.

The majority of respondents (56 per cent) reported some loss of income either for themselves (33 per cent), their spouse/partner (14 per cent), or someone else in the household (9 per cent), while a large minority (44 per cent) were unaffected by income losses in their household from COVID.

Young people were much more likely to be adversely affected, with 43 per cent of those 18-34 reporting they personally lost income due to the pandemic compared to 33 per cent overall. On the other end, seniors were less likely to be affected by income losses (about two-thirds unaffected).

The differences between renters and homeowners without a mortgage is particularly notable. Just over one-third (37 per cent) of renters reported no change in their household income, compared to 64 per cent for owners without mortgages.

With women carrying many of the burdens of this recession, significantly increasing public investment in child care and seniors’ care is essential to any economic recovery plan.

Young people (aged 18-34) who experienced income losses were much more likely to report a temporary layoff or furlough (50 per cent) and also higher rates of job losses and getting fewer hours.

Broken out by employment sector, not surprisingly workers in retail and service industries, trades and transportation, and social services, arts and recreation were all disproportionately affected by income losses.

Another question in the survey asked about whether respondents were working from home during the pandemic, and women (45%) were more likely than men (30%) to be doing so. This dovetails with prior Statistics Canada analysis in June, which showed that women were more likely to hold jobs that could be done from home. However, working from home comes with additional child care duties and other domestic labour, which disproportionately fall on women. With women carrying many of the burdens of this recession, significantly increasing public investment in child care and seniors’ care is essential to any economic recovery plan.

Another way of looking at the precarious situation of many households is whether they have savings or assets. Most people do not have reserves to stick out a prolonged period without income. Paying for household bills and necessities only, one in five respondents say they would not even last a month, and half of households could only last two months.

Most people do not have reserves to stick out a prolonged period without income.

Owning one’s home greatly increases one’s economic security in the face of a shock, with 42 per cent of homeowners without a mortgage reporting they could last more than a year without receiving any income. The results for homeowners with mortgages tend to track the overall poll results, primarily due to the financial pressure of the mortgage. 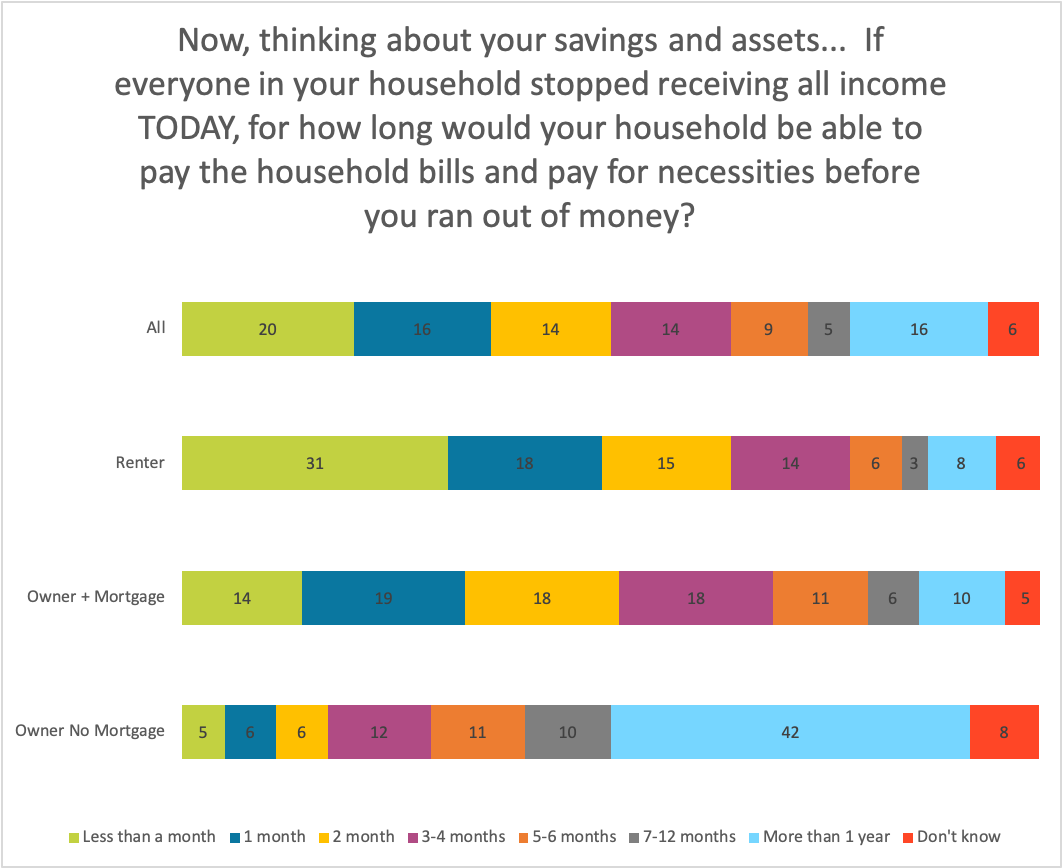 The most precarious demographic group in terms of lacking savings and assets is people with disabilities, of which 68 per cent would last only one month or less without any income. In contrast, older men, retirees and small business owners all reported a greater than average capacity to go without income due to savings and other assets.

CERB and other income supports

The economic response to the pandemic from governments has been unprecedented, with redesigned income supports and transfers created on the fly to put money into the pockets of households, financed by large federal deficits supported by Bank of Canada purchases of government bonds. The BC government’s response has also been notable among the provinces, including additional cash supports and a temporary supplement for adversely-impacted renters.

The pre-COVID weak state of personal finances for the majority of households plus the sudden shock of lost income from the shutdown underlines the need for income supports to be maintained to tide households over to a recovery period. The CERB has been a foundational income support for a large share of British Columbians and should be maintained as long as high unemployment persists amid the pandemic, while the inadequate Employment Insurance system must also be overhauled before any winding down of benefits like CERB .

The pre-COVID weak state of personal finances for the majority of households plus the sudden shock of lost income from the shutdown underlines the need for income supports to be maintained to tide households over to a recovery period.

Pre-COVID, a large share of people (45 per cent) reported they were “just getting by,” essentially living paycheque to paycheque, while another 14 per cent said they were falling behind. The rest reported either getting ahead with some savings, or being financially secure. COVID-19 worsened these outcomes, as would be expected, with a general slide in each of the four categories. This decline would be far worse in the absence of CERB and other efforts to provide income support. 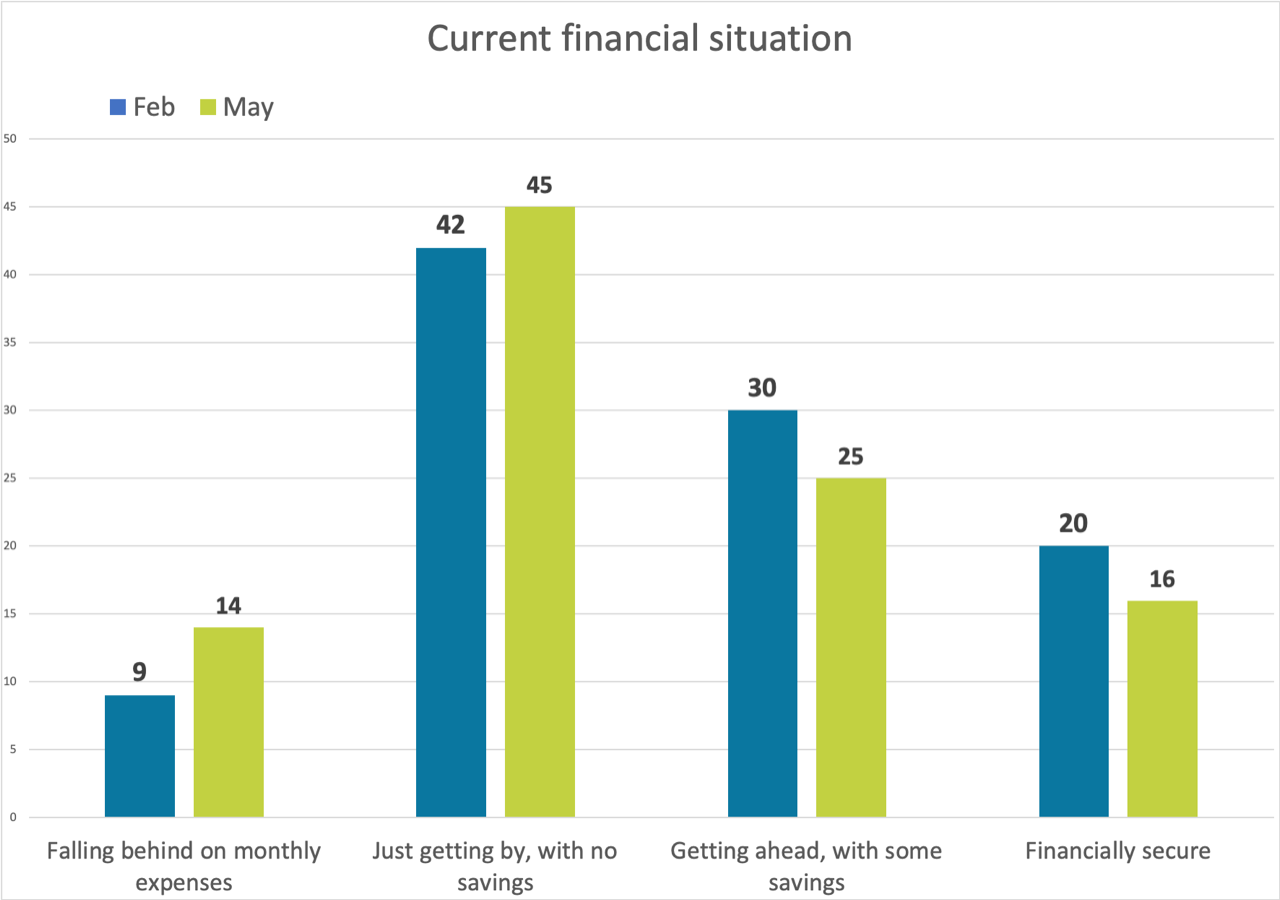 Pre-COVID, a large share of people (45 per cent) reported they were “just getting by,” essentially living paycheque to paycheque, while another 14 per cent said they were falling behind.

Small business owners were more likely to have accessed COVID-related benefits than the overall population (45 per cent of small business owners compared to 28 per cent for all), and 76 per cent of this group received CERB. More broadly, other benefits received by businesses and households include the federal wage subsidy, the $40,000 federal small business loan, the Canada Emergency Student Benefit, BC’s rental supplement and top up to social assistance rates, and federal top ups to the Canada Child Benefit and GST credit, among others.

Younger people were more likely to have received government benefits and this likelihood shrinks with age. 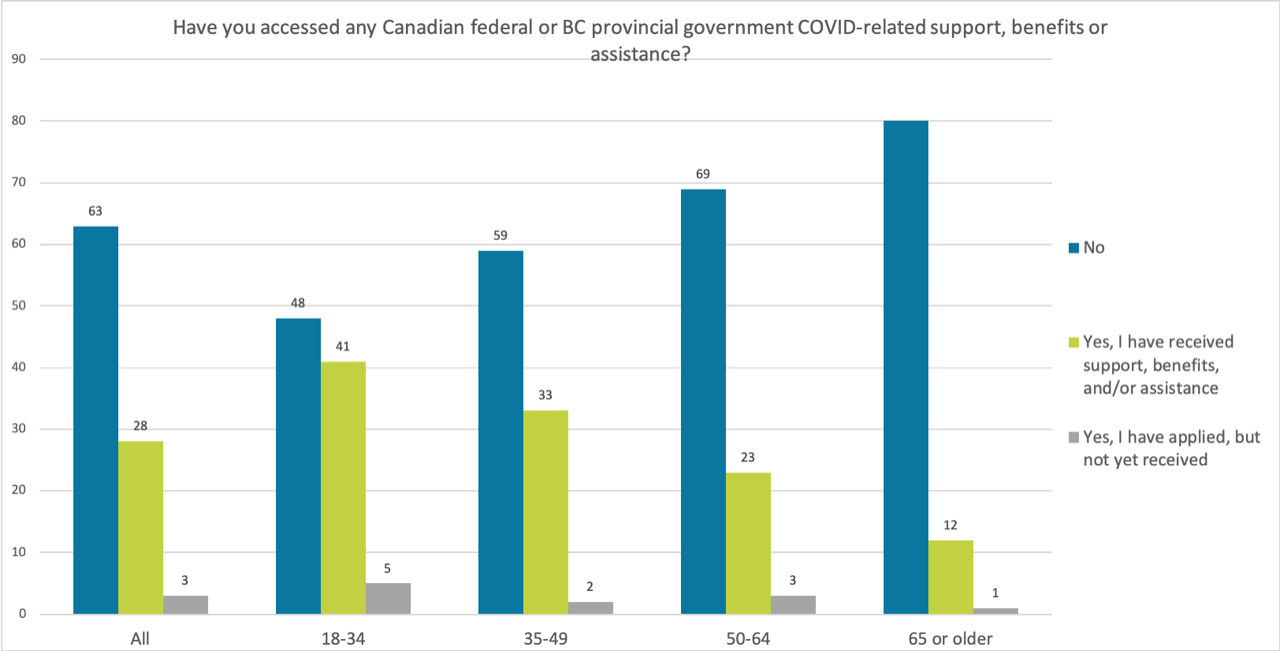 CERB recipients are more likely to be:

Sixty per cent of respondents in our survey favoured extending CERB to make it available to anyone unable to work. For a large minority, CERB and other income supports appear to have done an adequate job of replacing income and keeping households afloat during the pandemic. Given the profile of incomes and vulnerabilities seen above, there is a strong case for these supports to continue. Failure to do so would concentrate losses on a large minority of households who have little ability to weather a prolonged economic storm, while also damaging prospects for the overall economic recovery. In this and other ways, our fates are tied together.

This post is the third in a series looking at results from a comprehensive survey of British Columbians about their experiences of the pandemic, and is part of an ongoing research project funded by the Vancouver Foundation. Access the first and second posts.

Survey results are based on an online survey of 2,289 English-speaking B.C. residents aged 18 years or older, fielded May 16th to June 1st, 2020, inclusive. Respondents were recruited using a mix of proprietary online outreach and intercept techniques which accurately replicate a cross-section of the B.C. population. Quotas were applied to ensure that sample parameters for education and ethnicity were aligned with the latest Statistics Canada estimates. Weighting is applied to the data according to estimates for region, age and gender. The precision of these survey results is measured using a Bayesian credibility interval.  At a 95 per cent confidence level, the credibility interval for the total sample is +/-2.3 per cent.  The calculations for the credibility interval account for regional oversampling and a design effect of 1.228.

The questions asked as a part of this survey that relate to the data shared in this post are available here.

Taking stock of COVID-19 economic policy measures in BC