In the wake of February’s BC Budget, property taxes have been making headlines. But less attention has been paid to the province’s unusually low property tax rates, particularly in Vancouver, and how they help fuel the housing crisis.

The city of Vancouver has among the lowest property tax rates in the country. Even the additional provincial School Tax on properties over $3 million barely moves the needle on this.1

The annual residential property tax rate paid in Vancouver—including municipal, regional and provincial portions—is a quarter of one percent (0.26%) of assessed value. That’s less than half of the rate in Toronto and the eight other major Canadian cities compared in a recent report by Altus Group.2 Rates in Vancouver’s suburbs are also lower than any of the comparators. 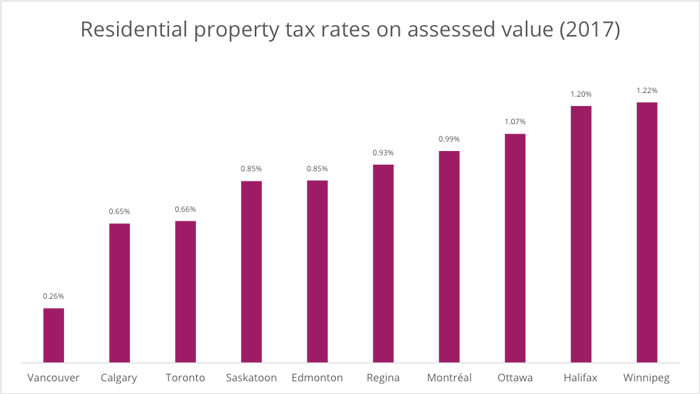 In concrete terms, property taxes on a $1 million property in Toronto were approximately $4,673 in 2017, while in Vancouver they were $2,555.3 After you factor in BC’s generous Home Owner Grant, the bill in Vancouver falls to $1985.

The story is similar for a $4 million property, which in BC would now be subject to a surtax on the provincial portion of property tax (also known as the “School Tax”). The change announced in February’s BC Budget adds a 0.2% surtax on the value between $3 million and $4 million, and 0.4% on value above $4 million, building progressivity into the property tax system in a way that the CCPA has long recommended.

Even after incorporating BC’s new surtax on high-end properties, taxes on a $4 million property are still more than 50% higher in Toronto than Vancouver.

Some will insist that taxes on properties should be compared not based on actual property values, but using different values across cities, since typical values are so much higher in places like Vancouver. I discuss this below and explain that Vancouver has very low property taxes by this measure, too. But the straightforward tax rate is important in itself and often overlooked.

One little-discussed effect of having low property tax rates is that it encourages holding residential real estate as an investment. Most investments have a “carrying cost,” and low taxes mean the carrying cost for property investment in Vancouver is very low. This makes investing in property attractive compared to holding other types of assets.

For example, if you invest in mutual funds in Canada, you’ll typically pay a carrying cost of about 2% per year in investment management fees. Compare that to the nearly eight-times-smaller 0.26% carrying cost of property taxes in Vancouver.6 Residential property values have risen steadily in Vancouver—almost tripling since 2005 alone. When you combine very high investment returns and very low carrying costs, it’s clear why this makes an enticing investment.7

How did we get here?

Vancouver’s property tax rate is so low in part because of a quirk of how property taxes are levied. Rather than locking in a tax rate (or set of rates) as we do with income tax or sales tax, property tax rates change every year. A municipality determines its annual budget, and then property tax rates are set for the year at a level that will raise precisely this amount of money.

When property values rise, the property tax rate (or “mill rate”) actually decreases to ensure revenues don’t exceed the city’s planned spending. For example, the tax rate in Vancouver has fallen by more than half between 2000 and 2017 (from 0.63% of assessed value to 0.26%).8

This steadily decreases the carrying costs of property, making Vancouver property an ever more attractive investment. By increasing demand, this puts upward pressure on prices, which leads to further declines in the tax rate, and so on.

In other words, as the tax base of property wealth grows, property tax rates are paradoxically decreased, meaning a continually smaller proportion of that wealth is taxed. This also means a smaller proportion of property wealth is harnessed for the public good (even though public investments like transit, schools, parks and basic infrastructure give urban land much of its value).

Some argue that property taxes should be compared using “typical” properties in each city (even if they are of very different value), rather than comparing properties of the same value.

This approach is also informative, but it ignores the huge growth of property wealth in cities like Vancouver and overlooks the incentives created by low carrying costs to hold real estate as an investment. Even by this measure, though, Vancouver’s property taxes are low.

In a recent Vancouver Sun op-ed, Elizabeth Murphy claimed—incorrectly—that Vancouver has the highest property taxes in the country by this measure. But the chart she published suffers from a glaring methodological flaw. Instead of using the overall benchmark price for properties in each city, her chart uses the benchmark for only the most expensive sub-segment of the market: single-family properties.

When the overall benchmark is used, typical property tax bills for Vancouver are among the lowest of the cities compared.9 After subtracting the Home Owner Grant, Vancouver has the lowest of the group at $2,155, which is more than $1,200 lower than Toronto. 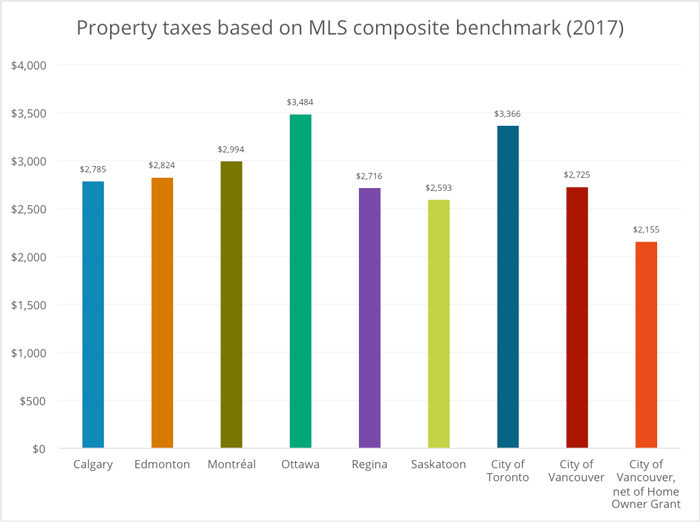 As a thought experiment, imagine instead of continuing with perpetual rate decreases, Vancouver’s residential property tax rate were frozen at the 2015 level of 0.35% (or even the 2000 level of 0.63%, which would still be lower than Toronto today).

The result would be a mix of additional revenue and lower property prices, since the increased carrying costs would make real estate a less attractive investment, decreasing demand. These are both desirable outcomes,10 and would ensure a larger share of the “land wealth rush” is captured for the public good, something that hasn’t happened to-date in Vancouver.

With additional revenue, the city or province could budget for the creation of hundreds or even thousands of new social and co-op housing units each year. As affordable units open up, this would also put downward pressure on prices of other units in the broader market.

Property tax rates should be structured progressively so that those at the highest end of the market pay the highest rate, as the CCPA has recommended. The additional provincial School Tax on properties over $3 million is an important step in this direction. But the BC government should also allow cities to use progressive rate structures, as the City of Vancouver has already requested.

Vancouver still has very low property taxes, and it’s time we faced up to the reality that they are helping to fuel our housing crisis.

—
A version of this piece is published in the Vancouver Sun.