We’ve heard a lot of griping recently about Vancouver’s proposed property tax increase for 2020, but missing from the debate is a reality check on the city’s extremely low tax rates.

Why is Vancouver’s rate so low? As land values increased dramatically in recent years, the property tax rate has been lowered over and over to compensate. As a result, even as property values have skyrocketed, the total tax bill owing on any given property has risen much more slowly. In 2000, the total property tax rate in Vancouver (including the municipal, regional and provincial portions) was 0.63% — but by 2019 it had been cut by more than half to 0.26%. As a result, we are taxing a smaller and smaller portion of the enormous levels of land wealth in the city.

In effect, we’ve designed our property tax system to pretend that hundreds of billions of dollars in land wealth doesn’t exist. Property taxes are treated exclusively as a means to raise revenues for a limited set of city services, no matter how large the stock of land wealth grows. Meanwhile, we puzzle about how to raise revenue for additional public investment in affordable housing.

The figure below shows Altus Group’s property tax comparison for 2019, with Vancouver’s rate far below ten other Canadian cities. 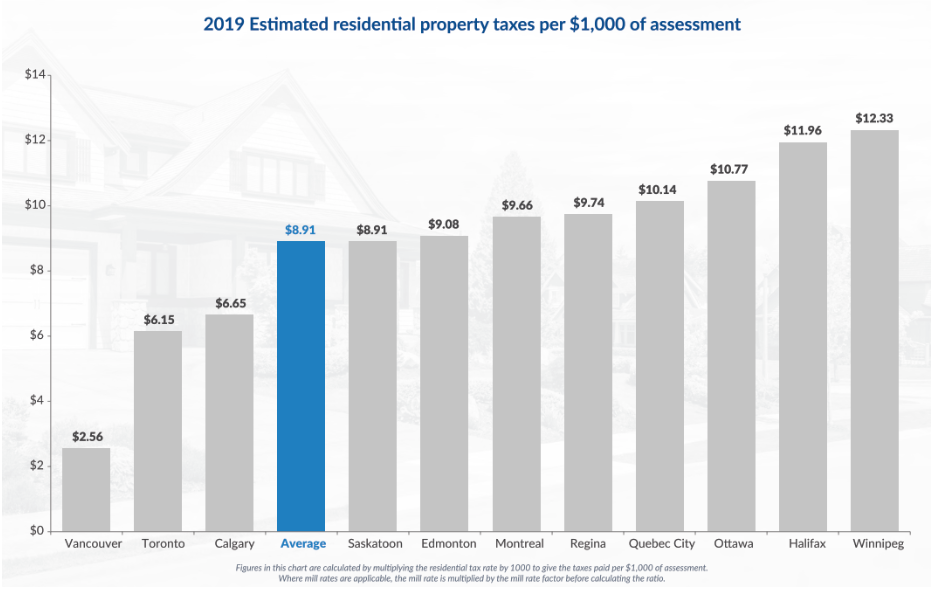 As a friend recently pointed out, when there’s an economic boom we don’t suddenly cut income tax rates. Those rates are held steady, with both individual incomes and our collective tax revenues rising together so the prosperity can be shared. In contrast, when there is a land wealth boom, we cut property tax rates, ensuring that this wealth isn’t shared. In Vancouver, which is highly attractive to begin with, property wealth will continue to grow.

This failure to adequately tax property wealth is a problem for a couple of key reasons.

The overwhelming portion of property wealth increases in Vancouver are in the value of the land (as opposed to physical investments in buildings on it). Land value is created collectively, reflecting what makes a given place useful and attractive to people, including public investment in infrastructure like streets, sewers, water, electricity, public transit, schools, parks and community centres. Land value is also created by the activity of everyone in the city providing the goods, services and social connections that make it thrive. 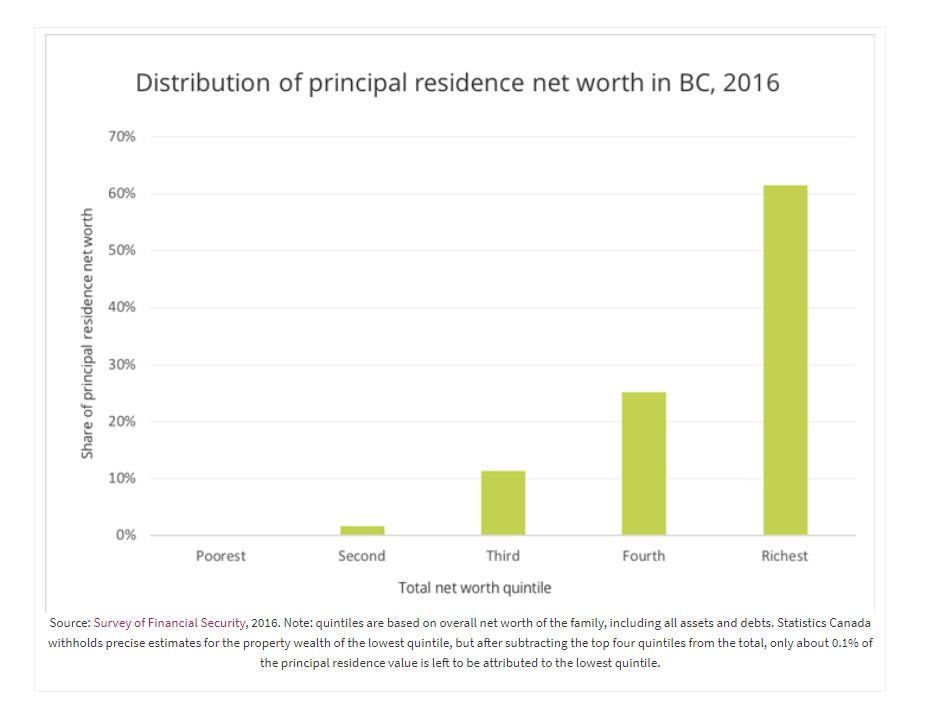 From this perspective, the proposed Vancouver property tax increase of 8.2% is good news. Because land wealth is so unequally owned, the property tax is already concentrated on wealthier households. But a major improvement would be to add progressive brackets—like in the income tax system—that would require the wealthiest landowners to pay higher rates as well. The provincial government already took a positive step in this direction with the additional provincial school tax on properties over $3 million that was introduced last year. Municipalities should be given the power to follow suit.

As I’ve written about previously, there is another little-discussed effect of having low property tax rates: it encourages using residential real estate as an investment. Most investments have a “carrying cost,” and low taxes mean the carrying cost for property in Vancouver is very low. This makes investing in residential land in the city attractive compared to holding other types of assets.

Since much of the media discussion of the property tax issue is focusing on the “sticker shock” of the proposed 8.2% increase, let’s take a look at what that means in dollar terms.

For a typical condo in Vancouver with an assessed value of $740,000, property taxes would go up next year by $89. For a detached house worth $1.75 million, the property tax increase would be $211 (and for detached properties, water, sewage and waste disposal fees would increase by another $143).

By comparison, consider the situation of a renter who is currently paying $1800 per month. Under the allowable rent increase of 2.6% next year, their rent would go up by $561 for the year (needless to say, without benefitting from any of the large land wealth gains seen in the city). For a family in a two-bedroom apartment renting for $2600, the additional rent for the year would be $811.

Low property tax rates also help fuel the housing crisis by encouraging residential land to be treated as an investment.

Another point of comparison to consider is with Toronto’s property tax levels. A $1 million property in Vancouver will pay about half the property tax bill of $1 million property in Toronto. One further point of comparison are the tax bills for average-priced homes. In Toronto, the average residential property—with an assessed value of $665,000—had a property tax bill of $4081 in 2019. In Vancouver, the average residential unit—with a much higher assessed value of $1.26 million—would have a bill of just $3219 (which is then reduced by at least another $570 under BC’s Home Owner Grant).[1]

BC also has a generous program that allows property taxes for principal residences to be deferred until sale. This may be particularly useful to those with high levels of property wealth but lower current incomes though the program has no low-income requirement. The deferral option is available to those 55 or older, surviving spouses, people with disabilities as well as families with dependent children (including adult children in post-secondary education even if they don’t live at home.)

In sum, Vancouver’s property tax rates are uniquely low—far too low. As private land wealth has exploded in the city, these low rates are deepening inequality. Low property tax rates also help fuel the housing crisis by encouraging residential land to be treated as an investment. Progressive property taxation can help address these problems. If we choose, we can harness this enormous source of wealth—created by all of us—for the public good, including a massive build of publicly owned affordable housing.

[1] Note that because of Ontario’s system of four-year assessment averaging, the actual market value of the average Toronto unit would be somewhat higher than the assessed value. Note also that in both cities, there are additional utility fees separate from property taxes, which are not tied to property value. Finally, note that Toronto’s budget documentation describes an average assessed property value while Vancouver provides the median assessed value (which is similar to but not the same as the arithmetic average).