“The measure of any society is reflected in the degree to which it is willing to help the most vulnerable.”

Mike de Jong in the BC Budget 2016 Speech

If this is the measure we apply to Budget 2016, then BC is failing miserably. What this budget offers to BC’s most vulnerable is a drop in the bucket.

Here are my first take-aways after spending a few hours at the BC Budget lockup in Victoria. There’s a lot of information in the 134-page Budget 2016 and this piece was written over the course of the afternoon/evening as I made my way back to Vancouver.

1. After a nine-year freeze, disability benefits are increasing by a measly $77 a month.

This increase doesn’t even cover the increase in the cost of living since 2007 when the rates were last increased. One third of food bank users in BC receive disability benefits. Upping the monthly benefit to $983/month would hardly change that.

There is no change in social assistance rates for people without disabilities whose rates have also been frozen for nine years.

2. BC remains the only province without a poverty reduction plan

The new tax credit for farmers who donate food to charity is a nod in the direction of food security but there’s no big-picture plan to address poverty and hunger so people don’t need charity to survive. 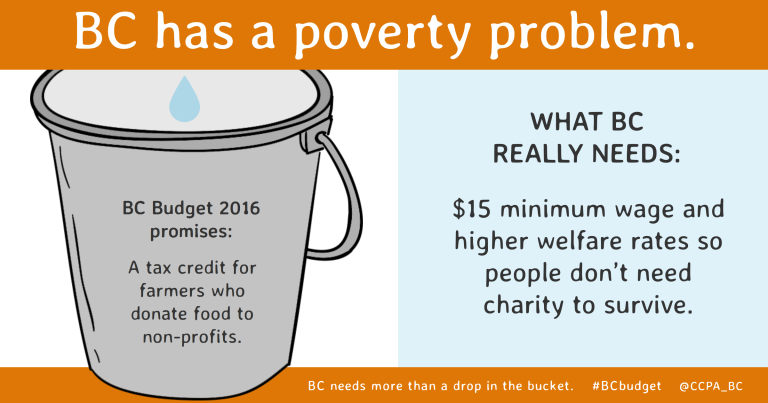 3. Most of the housing measures focused on home buyers

A recent report by the BC Non Profit Housing Association shows that 23% of BC renters pay more than 50% of their income in housing. There were 119,000 such households in 2011, likely more now. They won’t be buying a home any time soon and they also need help from the government. Current rental assistance programs for low-income families with children and seniors help only 30,000 households. That’s only a fraction of the need and this budget offers no increase to rental assistance in the budget.

The government will begin to collect citizenship information for all home buyers in the province but there are no measures in this budget to curb speculation or tax vacant homes in the overheating Vancouver real estate market.

4. The budget commits to 2,000 new affordable housing units over 5 years

This new investment is welcome but it’s hardly “historic” given that the province was creating 2,000 units of social housing every year in the 1980s and early 1990s (including their investment in cooperative housing). Unfortunately in 1993 the federal government withdrew funding for new social housing development, and the construction of new social housing units slowed down considerably.

Only 14% of the money is available in the first year, so we can expect 280 new housing units to be funded. That’s a welcome investment but it is modest at best. And the Minister of Finance could not explain how they define “affordable” housing, which itself suggests that it won’t all be social housing for low-income British Columbians.

Additional federal funding may be able to increase the number of new units of social housing built. Time will tell by how much.

5. MSP premiums are going up again in 2017, couples without children will be hardest hit

MSP premiums are going up again in 2017. This time, premium assistance is modestly expanded and the income threshold for receiving assistance will increase to $42,000 from the current $30,000. This is a welcome gesture for modest-income British Columbians who were considered too well-off for premium assistance before but is a rather arbitrary threshold of where tax fairness ends.

A senior couple with income of $52,000 will pay $240 more per year under the new scheme, the same as a power-couple of executives earning a combined total of $5 million. Overall, the restructuring of premiums will bring in more money from MSP premiums than charging children did – an estimated $46 million per year.

6. The government is establishing a Commission on Tax Competitiveness, but does not appear interested in tax fairness

The business sector is concerned about the impact of raising electricity prices and what they deem to be unfair taxes on their bottom lines. The members of the Commission and the terms of reference were not revealed at budget time but it seems clear that the impact of rising hydro bills or MSP rates on families isn’t something the government considers worthy of review.

7. The budget for K-12 education is practically frozen for the next 3 years

Funding for K-12 education is virtually frozen this year, and budgeted to increase by 1% in each of the next two years. This fails to account for inflation, let alone the increasing student enrolment. Unfortunately, this means we’ll be seeing even larger classes and more students with special needs not receiving the supports they need to learn.

The Throne Speech contained a line that made me very optimistic. It seemed like the government recognized the affordability pressures faced by ordinary families:

This month, your government will take steps to ease the pressures of cost of living increases.

There are some very small changes to that effect sprinkled in here and there, but they are too small to make a tangible difference. There is an additional $11 million to support child care centres, which will create a small number of new spaces but there’s no guarantee these will be affordable.

With child care fees running higher than university tuition in the province, many families are struggling to stay afloat. Small enhancements to the status quo like this new funding are just not cutting it — BC needs to adopt the widely-endorsed $10 a Day Plan. The federal government’s interest in supporting a national childcare program via their Social Infrastructure funds represents a unique opportunity for action but there’s nothing in this budget to suggest BC is prepared to take it. 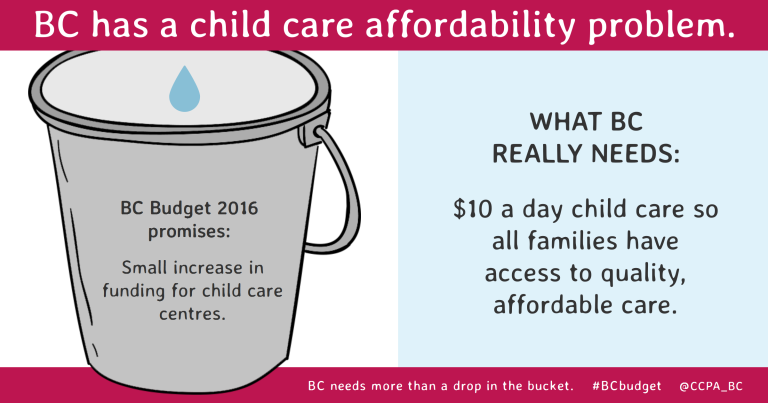 9. The so called “revenue-neutral” carbon tax gives away $500 million more in tax than it raises every year

Even if you’re a supporter of a “revenue neutral” carbon tax, it’s clear that “neutrality” can be achieved with smaller tax cuts. The extra $500+ million per year would be better used to increase the low income carbon tax credit (giving a break to modest income families) and/or fund investments to get us off fossil fuels.

10. There is some new infrastructure funding but no transit funding for Metro Vancouver

There is $1.1 billion in new capital spending this year over what was announced in Budget 2015. Half of that is for BC Hydro, largely for funding initial construction on the controversial Site C Dam.

Universities and colleges will be able to fund some much-needed deferred maintenance but the capital budget for schools (for seismic upgrades and other repairs) is actually down by $21 million. There is also an increase for BC Transit.

11. BC Budget 2016 prioritizes debt-reduction instead of helping British Columbians in need

Despite BC already having an excellent credit rating and very manageable debt (one of the lowest among the provinces), the BC government has chosen to pay down debt faster than scheduled in last year’s budget. If BC had held to the schedule instead, we’d have $500 million more to spend this year (the difference between a 17.2% debt-to-GDP ratio and a 17% debt-to-GDP ratio).

The resources going to debt reduction are resources that are not available to help children growing up in poverty, youth struggling with mental illness, or frail seniors stuck in a hospital bed longer than they need to be because a residential care bed is not available.

In answering a question in the Budget lockup, the Finance Minister outlined his priorities clearly: “first call” on any budget surpluses will be paying back debt. I suspect that our friends at First Call: BC Child and Youth Advocacy Coalition and I aren’t the only ones concerned with this order of priorities.

Bonus Budget fact: The BC film industry got $493 million in tax credits in 2015/16 despite the fact that it doesn’t need them now that the dollar is so low.

That’s because the tax credits were designed as a percent of the industry’s labour costs in good times and in bad. In fact the local film industry is embarrassed enough about taking so much public funds that “representatives of the film industry have approached the government to work together to seek ways to address this pressure.” (p. 61 in the Budget)

Kudos to the film industry for making this move. I hope they are donating a lot of these tax credits to worthy charities instead of pocketing them in profits!

Was the Ministry of Finance asleep at the wheel here? Why wasn’t the government the one taking action on this file in the first place instead of waiting for industry to approach them? Another example of funds that could have been used to provide help in areas where it was truly needed.

UPDATED Feb 16, 8:34pm: Added sections 8 to Bonus. Fixed a couple of typos (let me know if you find more). Modified the intro to indicate the piece is now complete.