In a new report we released this week, Seth Klein and I show there’s a clear need of tax reform in BC, both to raise new revenues and to make our tax system more fair (Vancouver Sun oped here, CTV News story here).

As the report’s title suggest, this is all about options. Instead of making specific recommendations for tax reform, we chose to highlight the broad range of possibilities for raising new revenues and reducing inequality. We see this as the start of a broad, thoughtful and realistic conversation about how we all, as citizens of this province, can work together to meet our pressing challenges and strengthen our communities.

I think we can all agree that without more revenues, we can’t sustain key services we all rely on, let alone begin to meaningfully tackle the pressing challenges of climate change, income inequality and poverty.

The good news, as our research shows, is that BC has a lot of room to raise new revenues. For example, if BC collected the same amount of personal income tax (incl. MSP) as the average for other Canadian provinces, we’d have an additional $2.4 billion in revenues.

We believe that all parts of the tax system should be on the table as we look for a way to get out of this budget crunch, create the fiscal room to meet our pressing needs and make the tax system more fair. This is why, while our report focuses on personal income tax reform (the most progressive part of the system), we also highlight options for reform to property tax, corporate taxes, and resource royalties.

Our 4-page Summary includes a handy table with a number of the options we model, the potential revenues that can be raised with each one and some examples of the kind of things each option could pay for. Here’s just one example:

If we increased the current top tax bracket tax rate from 14.7% to 17%, and added two new upper-income brackets (20% on income of $150,000-$200,000 and 22% on income over $200,000), we could raise $930 million. This would be enough to fund a much-needed increase to welfare rates (frozen since 2007), restore class sizes, composition and specialist teacher staffing to 2007 levels and fund additional family support programs under the Ministry of Children and Family development. 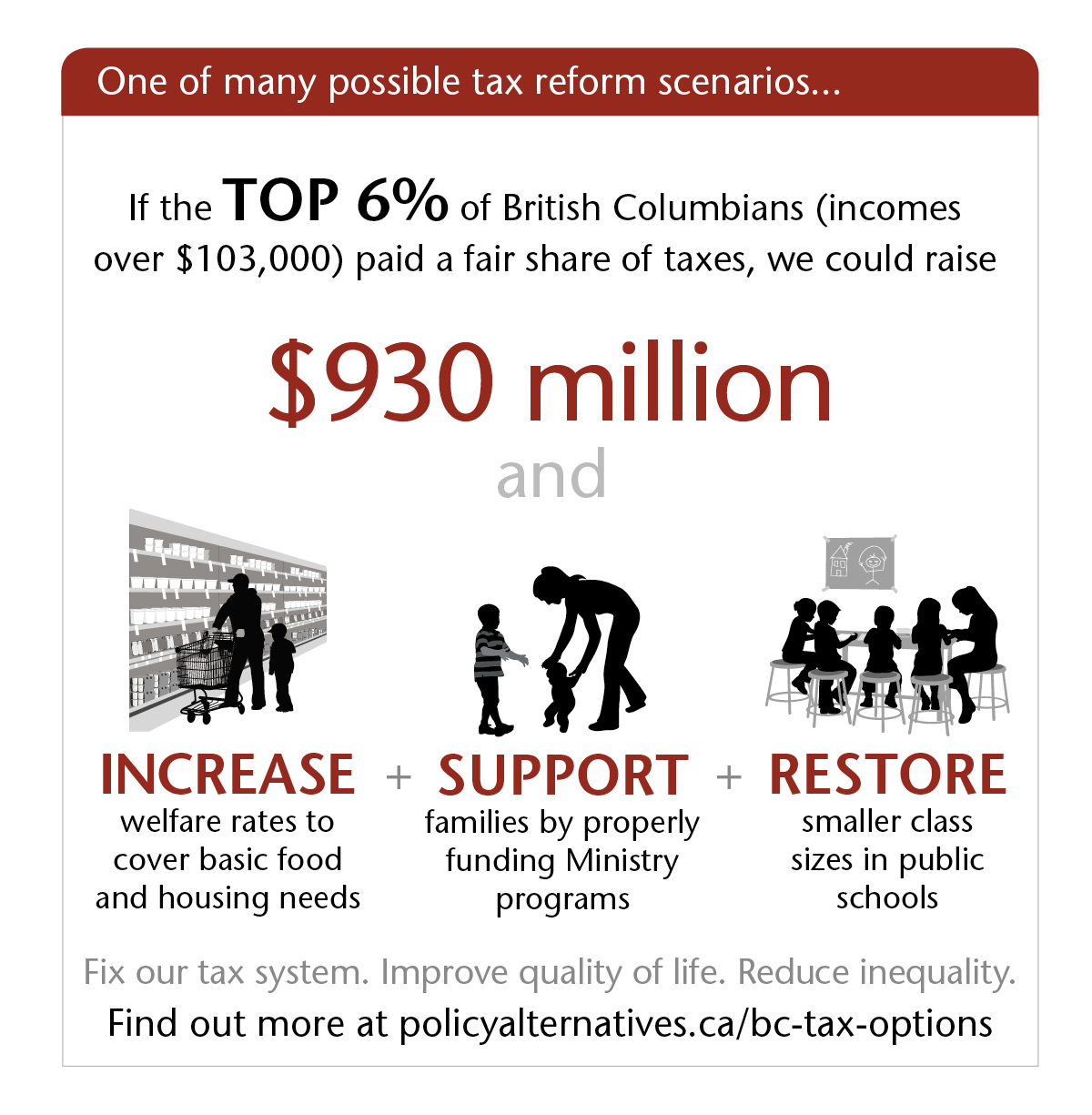 While the BC government boasts about having low taxes in their TV ads, our province faces a crisis in seniors care, our hospitals are overcrowded, our schools cannot afford to provide children with learning disabilities and other special needs the supports they need to learn well. A decade of tax cuts has left us in the absurd situation of having the highest poverty rate in Canada, but some of the lowest income taxes for the highest income earners (we have the lowest income tax for those earning up to $120,000, the second lowest up to $340,000 and the third lowest up to $730,000).

Yes, we are talking about increasing taxes, but this should come with tax reform that will spread the tax bill more fairly. We’re now facing the absurd reality of a tax system where the higher your income, the lower your total provincial tax rate when all personal taxes are considered (income, sales, property, carbon tax and MSP premiums).

This is not right.

Over the last decade, taxes have been shifted from corporations to families, and from upper-income families to middle- and modest-income ones. Cuts to personal income taxes delivered large savings to high earners (an average of $41,000 per year for a family in the top 1%). In contrast, most BC families’ tax cut worked out to a few hundred dollars a year, most of which went to cover increased MSP premiums, and higher out-of-pocket fees for a host of programs, including school fundraisers, fees for seniors care, tuition for students and many more.

Our report shows that if most people pitched in the cost of a cup of coffee a day (meaning $200 – $800 per year for at least 80% of British Columbians), with high earners contributing more, we could raise up to $2.3 billion – enough to strengthen our communities and build a province we can all be proud of.