BC Finance Minister Kevin Falcon says he is keen to take a fresh look at the BC tax system. He is welcoming new ideas, and he even wants your opinion. He has struck an “expert” panel to review BC’s tax regime, and in early January the government launched an online tool that the public can use to model (and recommend) tax and spending changes. 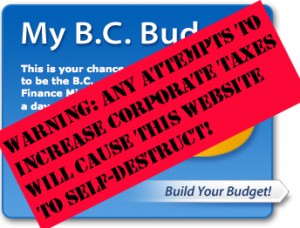 But don’t hold your breath that new progressive tax changes are in the offing.

First, a closer look at that expert panel: You can find the government’s announcement of the panel’s terms of reference and a list of the panel members here. Sadly, the panel is not mandated to examine the fairness of the overall tax system, nor is it to propose ideas to restore the BC tax system’s progressivity (something that is sorely needed, as we found in this CCPA study last summer).

Rather, the mandate is narrowly to advise on how to improve the “business competitiveness” of BC’s tax system, and to offer recommendations on “administrative improvements to streamline the Provincial Sales Tax.”

The membership of the “expert” panel is entirely made up of business representatives. Not a single person on the panel is an academic economist (the one person with an academic connection is Grace Wong, a former assistant dean with UBC’s Sauder School of Business). There are no representatives from labour or the community or non-profit sectors. The panel chair, Sarah Morgan-Silvester, is the current chancellor of UBC, but has spent most of her career as a senior banking executive.  In short, there is not a single person on the panel one might expect to offer a dissenting voice ­– a perspective that is interested in anything other than how to lower taxes for the corporate sector.

And how about that cool new online BC Budget simulation tool for the public? You can access the “My BC Budget” website here.

Now I love online tools, and I’m told I’m somewhat nerdy when it comes to the BC Budget, so I was all ready to geek-out on this.  And thus, my disappointment is deep.

The stated intent of the online tool is to:

“Let people see the effect of raising and lowering revenues and spending on the provincial budget, with the goal of eliminating the 2013-14 deficit, which was forecast in September to be $458 million. Once people have achieved a balanced budget, they can send their solutions to the finance minister with their comments. The website also includes informative facts about the budget and is one of several ways the government is consulting with British Columbians in the lead-up to Budget 2012.”

The government’s ill-advised (and much-amended) balanced budget legislation commits it to balance the 2013/14 budget (an entirely arbitrary deadline). And so, only when someone has used the online simulator to model a balanced budget does the tool allow you to submit your “solution”.

But the tool is much sillier (and nefarious) than that.

You can reduce any tax you want by as much as 100%, but you can’t increase any tax by more than 10% (which is certainly interesting, given the stated intent of trying to balance the budget).

What’s more, while you can adjust personal income taxes overall, the simulator does not allow you to adjust the income tax brackets (let alone propose one or more new upper-income ones, as I recently did here). Meaning, you cannot modify the progressivity of the tax system (the distribution of taxes by income) – Minister Falcon apparently isn’t interested in hearing about that.

And don’t go trying to propose increases in corporate taxes. If you do, the simulator responds with a finger-wagging note warning: “Raising corporate income tax would make the province less competitive compared to other provinces and countries, and would reduce long-term economic growth. Companies would decide to move to lower-tax jurisdictions, costing B.C. jobs and investment.”

This despite the fact that BC has among the lowest corporate tax rates in the country, and global accounting firm KMPG consistently finds BC to be one of the least expensive places to do business among major industrialized nations. Surely, we have room to move on this front.

Oddly, the one tax increase the simulator does not actively discourage is further increases to MSP premiums, the most regressive tax in the province.

Overall, the simulator is quick with warnings if you try to increase taxes to close the budget gap, but oddly silent when you try to lower spending. No bias there I guess.

(My thanks to both Shannon Daub and Iglika Ivanova for drawing some of these ridiculous features to my attention.)

We do indeed need a fulsome review of BC’s tax system, and the public certainly does deserve a chance to weigh in with our ideas for how to rethink the ways in which we raise and spend revenues. Sadly, neither this expert panel nor the online simulator will give is that chance. As I’ve said before, we need a full Fair Tax Commission, with an extensive public-engagement process that lets us genuinely deliberate on these matters.