(with Marc Lee and Iglika Ivanova)

Most British Columbians would agree that everyone should pay their fair share of taxes. And most assume that the wealthy pay more, not only in straight dollars, but also a higher tax rate as a share of their income.

So most would probably be shocked to learn that, in reality, that is no longer how our provincial tax system works.

A report produced by the CCPA-BC in 2011 examined changes to the provincial tax system between the years 2000 and 2010. It considered the total provincial tax rate for households at different income levels (the actual tax bill as a share of household income for all personal provincial taxes combined –– income, sales, carbon and property taxes, and MSP premiums).

Using a Statistics Canada database that draws on tens of thousands of tax files, it found that BC now has a tax system where the rich pay a lower total provincial tax rate than the rest of us.

In 2000, most BC households paid about the same total tax rate, with the richest 10% paying a little more. By 2010, however, the tax system had become out-and-out regressive – the higher your income in BC, the lower your overall tax rate. The results look like this: 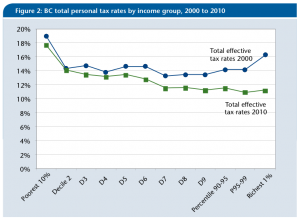 How did this happen?

The BC personal income tax system remains mildly progressive, meaning as household income rises, so too does the tax rate. The problem, however, is that income taxes have fallen over the last decade, with the largest tax cuts benefiting primarily upper-income earners. Indeed, the provincial treasury’s reliance on income taxes dropped by one third between 2000 and 2010.

But other taxes we pay –– sales, carbon, property, and MSP premiums –– are not progressive, but rather, cost middle and lower-income households more as a share of their income.  Amazingly (as the chart below shows), the provincial treasury now relies more heavy on sales tax income than it does on income tax, and, even more shockingly, collects more from MSP premiums than it does from corporate income taxes. 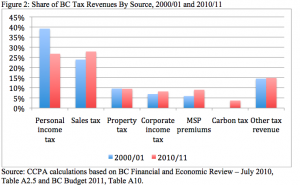 And while total taxes are down for all British Columbians, we have not all benefited equally. Tax cuts between 2000 and 2010 delivered an average of $9,000 per year to the richest 10% of BC households, and a whopping $41,000 to the top 1%.  In contrast, middle-income households received an average tax cut of about $1,200, and lower-income ones got about $200 per year –– savings that are likely wiped out by increases in Hydro and other fees.

A big reason for these huge differences is the growing gap in earnings and income. The wealthiest 1% of British Columbian households now have an average annual income of about $820,000 (up from about $600,000 ten years earlier), and consequently have benefited greatly from tax cuts. Our provincial tax system, instead of helping to offset the growing income gap, is now contributing to the divide.

These tax cuts come at a price –– foregone government revenues and reduced public services. Between 2000 and 2010, BC’s tax revenues fell by 1.7% of GDP. That may sound like a small change, but it’s equivalent to $3.4 billion a year –– money that is no longer available to reduce the deficit or to spend on needed public services.

It’s time for the provincial government to restore fairness to our tax system. A Fair Tax Commission should be initiated. Such a commission should engage British Columbians in a broad deliberative process (such as occurred with the Conversation on Health, or the Citizens Assembly of Electoral Reform), and examine: a) how much money we need to raise to fund the services and infrastructure we want to pay for together; and b) how to raise these revenues in a equitable and efficient manner. We need to look at the system as a whole and figure out how to make it fair.