It’s a brand new year, and BC’s Medical Services Plan (MSP) premiums are no more. That’s great news because MSP premiums were a very unfair tax (or “regressive” as we economists like to say).

In its first budget (in 2018), the current provincial government announced it would phase out MSP premiums by 2020 and has made several other changes to personal taxes (including adjustments to income tax, PST, tobacco and the carbon tax). We crunched the numbers to find out how these changes impact households at different income levels. We found that only BC’s richest are paying higher tax rates, while the vast majority of households are seeing their effective tax rates fall. 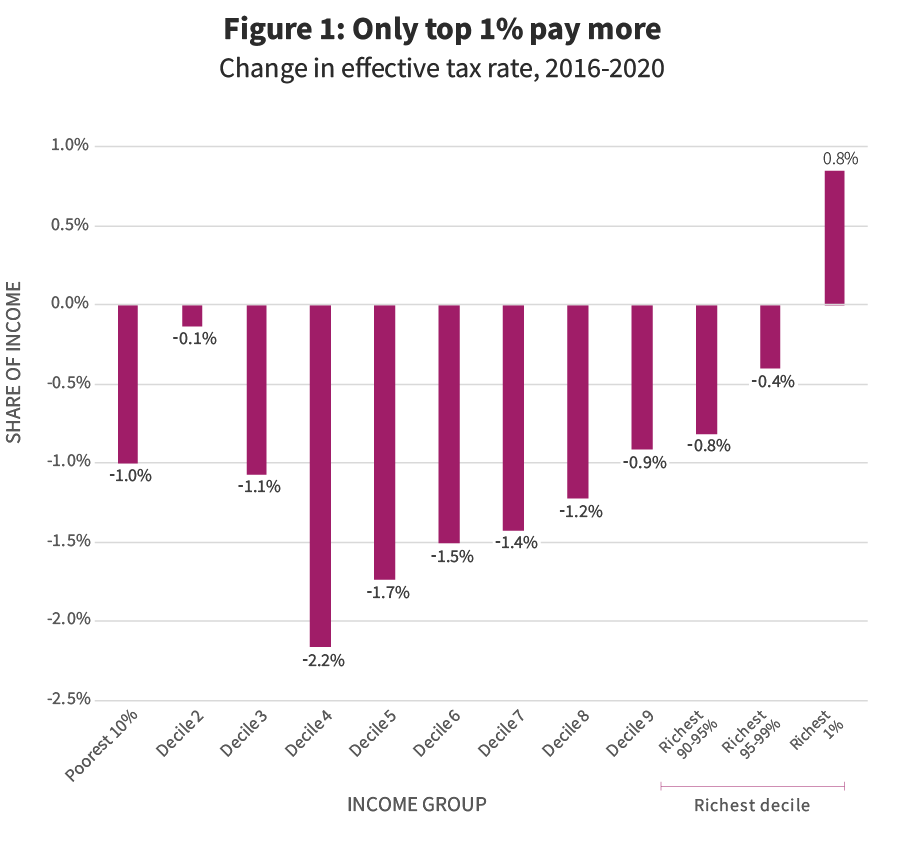 The tax reduction for the majority of households is almost entirely a result of the elimination of MSP premiums. MSP was a particularly unfair tax because whether you make $45,000 or $450,000, you paid the same flat dollar amount ($900 per year per adult back in 2017), though those with very low incomes got assistance. Under this system, the rich paid a much smaller share of their income in MSP than modest- and middle-income earners.

The top 1% of households will also benefit from not having to pay MSP premiums anymore. But they pay more under the new income tax bracket of 16.8% on income over $153,900.

This is good news for tax fairness in BC. In contrast, tax cuts made by the previous government between 2000 and 2016 benefited the top 1% far more than middle- and modest-income households, while MSP premiums more than doubled (Figure 2). 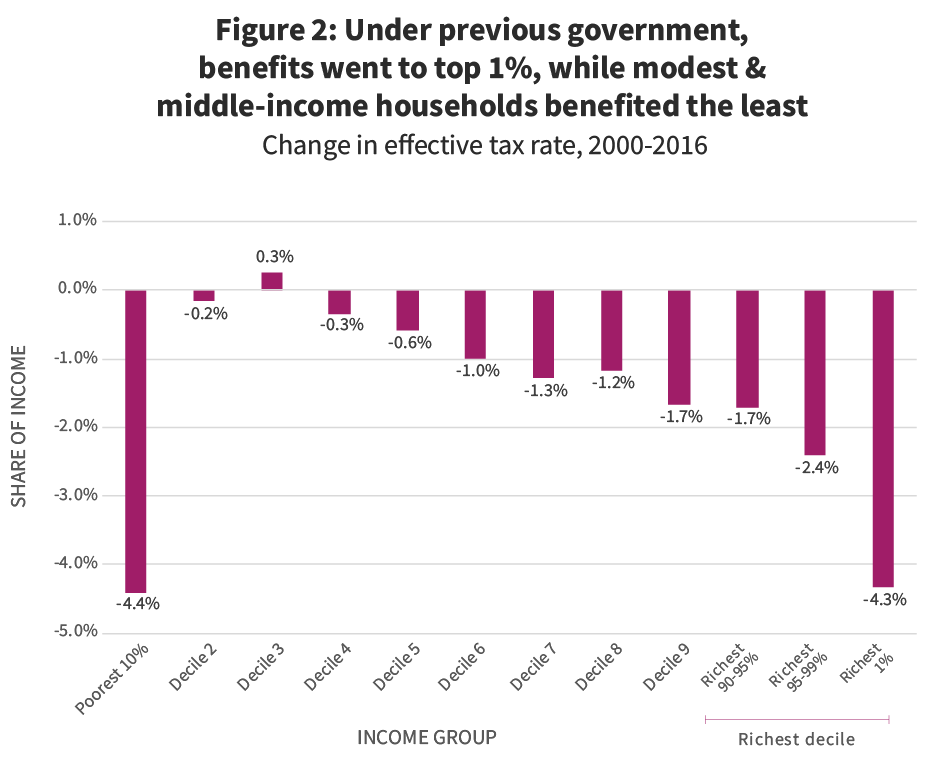 Eliminating an unfair tax like MSP is important, but it costs $2.7 billion in lost provincial revenue annually. It’s important to replace that revenue because there’s a huge backlog of social and environmental investments needed in this province.

To address the loss of revenue from MSP, the government introduced the Employer Health Tax (EHT), which is charged as a share of payroll for large and medium-sized employers. This is a positive move in terms of tax fairness—but the EHT covers only $1.9 billion of the $2.7 billion in MSP revenue we’re losing annually. (You can find our previous detailed analysis of the EHT on Policy Note here and here.)

Overall, though, two decades of successive tax cuts have eroded our ability to fund public services and investments. Provincial government spending has declined dramatically as a share of our total economic pie (GDP) over the past two decades. The current government’s tax changes and investments in public programs have ended this downward trend, but not reversed it.

The tax reduction for the majority of households is almost entirely a result of the elimination of MSP premiums.

In fact, if we dedicated the same share of our GDP to public spending today as we did in 2000, we’d have over $7 billion more available each year to invest in urgent social and environmental priorities. In concrete terms, the government could quadruple funding to the CleanBC climate plan, add 10,000 units of new affordable housing per year, raise welfare rates to 100% of the poverty line, fully implement universal $10-per-day childcare and eliminate tuition fees for domestic students—with room to spare.

The good news is that we are an incredibly wealthy province, and there are many opportunities to make further improvements to tax fairness while also shoring up BC’s capacity to make the public investments we need.

So, good riddance to the MSP. Let’s celebrate this major improvement to our tax system and get down to work on the next steps.