By Iglika Ivanova and Lynell Anderson

A year into the pandemic, there is a near-universal realization across Canada that the recovery must include large-scale public investments to build a quality, affordable child care system. This would enable parents with young children, in particular mothers, to return to work or pursue educational opportunities to support children’s healthy development in the early years and create good, family-supporting jobs for women.

A new CCPA study confirms that longstanding problems with Canada’s fragmented, under-funded child care sector have been magnified by COVID-19. And, while enrolment dropped in most Canadian cities last fall, parent fees continued to increase in many of them—including here in BC.

The study surveyed child care providers in 37 Canadian cities in fall 2020 (five of them in BC) and found staggering differences in how much parents pay for child care fees across the country. Parent fees are exorbitant in some cities, in particular in Greater Toronto (GTA) and Iqaluit, while they are much lower in provinces that provide substantial operational funding for child care and set maximum parent fees.

Metro Vancouver municipalities used to consistently rank alongside those in Greater Toronto as the most expensive places for child care in Canada. This affordability crisis is one of the reasons why the community-developed $10aDay Child Care Plan gained such broad public and political support in recent years. The introduction of the BC child care fee reduction funding in 2018 reduced or stabilized fees and BC now ranks in the middle of the national pack. The one exception is Richmond, which remains one of the most expensive cities in Canada to have a toddler in child care.

However, BC’s progress to date is little consolation for parents who still pay thousands of dollars more per year than they would if they lived in Quebec, where a universal, affordable child care system has been in place for more than 20 years. Even in Kelowna, the lowest-fee city of those surveyed in BC, the cost for infants and toddlers is five times higher than in Quebec—about $9,000 more per year. Parents with children under three in Richmond pay seven times more than parents in Quebec or $13,500 more per year. Fees are a bit lower for children aged three to five, but even for this age group BC parents fork over between $8,000 to $10,000 more per year than in Quebec. That’s why the 53 $10aDay prototype sites across BC have been described as “life changing” for those families lucky enough to get a spot.

At the moment, BC finds itself with a foot in both camps. Over the last three years the provincial government has supported modest reductions in parent fees and increases in educator wages, however, BC did not set maximum fees or establish strong accountability requirements for ongoing fee increases.

Sharp fee increases in BC over the last year

Leaving BC’s child care sector largely subject to market forces has resulted in ongoing fee increases, despite the recent investments by the Province. Of the 37 Canadian cities surveyed, some of the highest fee increases for 3 to 5 year olds were reported in BC.  The only Canadian cities that saw higher fee increases were Brampton, Windsor and Mississauga, where existing fee reduction programs were cancelled.

To begin to address this troubling trend, the BC government recently set maximum parent fees for new child care programs. As of April 2021, fees will be capped for newly established facilities participating in the program (before they could set their initial monthly fee to whatever they wanted). However, the cap is set high—at the 70 percentile of fees in the region for the same type of care (i.e., they can charge up to a level where 70% of the existing child care spaces in the region charge less and only 30% charge more)—and will result in BC continuing to see substantial year-over-year increases in median child care fees as new, relatively more expensive places come online.

Child care fees are higher in the for-profit sector in every city surveyed in Canada but one, and 25% higher or more in many cases.

Figure 1 shows that, in BC, for-profit fees for three to five year olds were 60% higher than non-profit fees in Surrey and ranged from 24% to 28% higher in Kelowna, Burnaby, Vancouver and Richmond, costing BC parents between $186 and $418 more each month.

For-profit spaces for younger ages were between 23% and 61% more expensive in BC, with the largest difference reported in Vancouver. 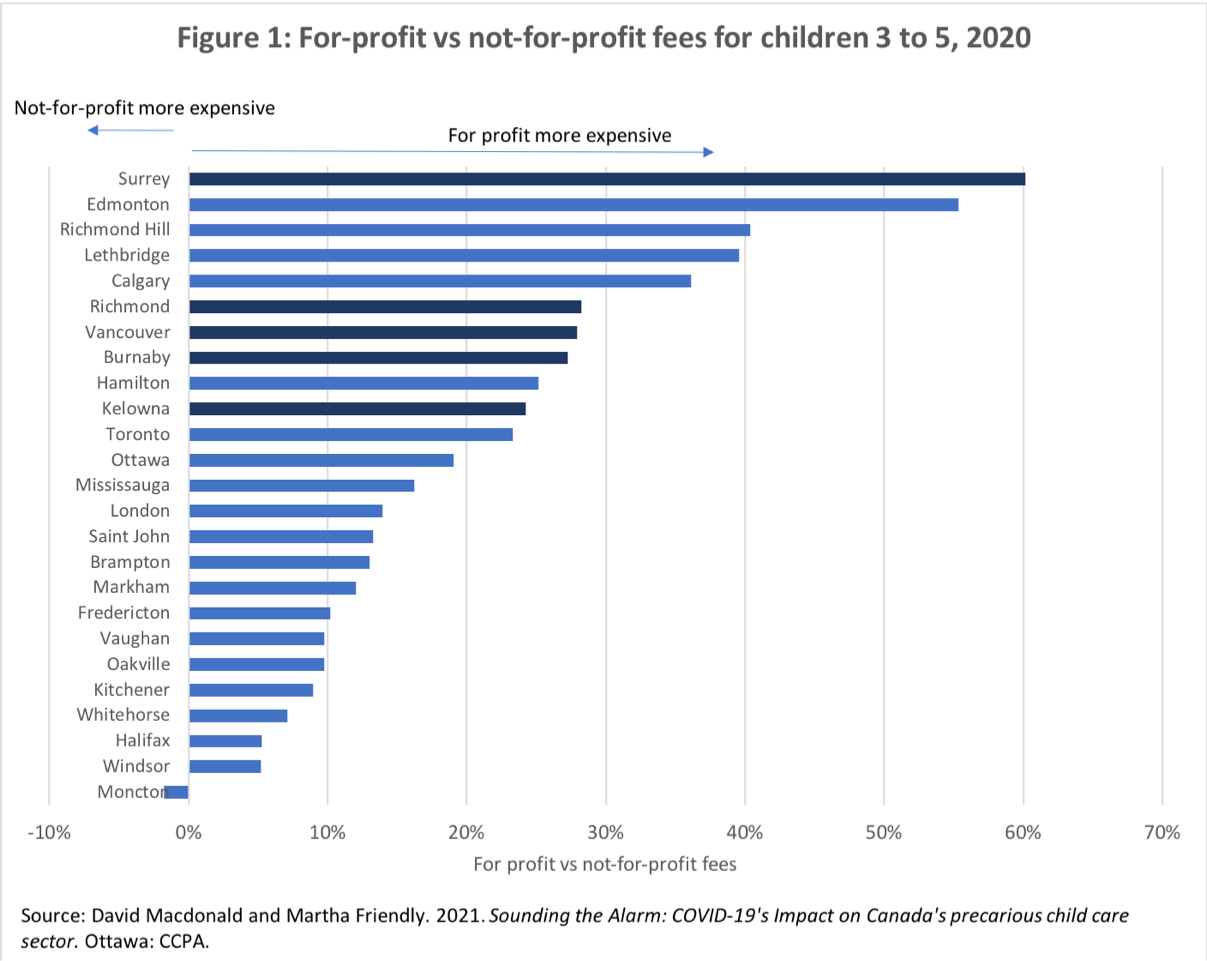 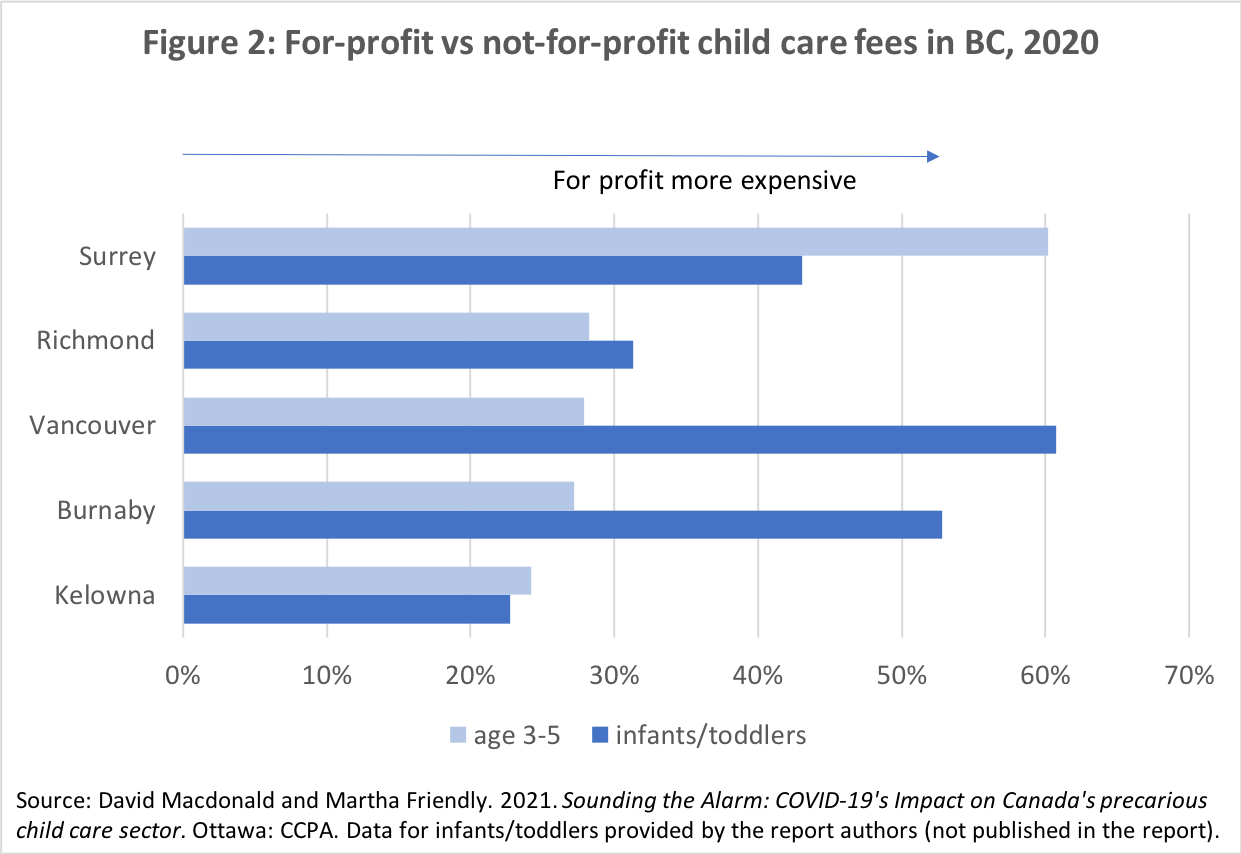 Child care providers in every city outside Quebec reported at least a 10% drop in child care enrolment between February and November 2020. Of the five BC cities in the survey, three reported large declines in enrolment—Richmond (32%), Surrey (23%) and Burnaby (20%)— while the other two, Kelowna and Vancouver, saw moderate declines in enrollment (13% and 15%, respectively).

The CCPA study found a strong correlation between drops in enrolment and high fees. Although cities with higher unemployment generally saw bigger enrolment declines, the low-fee child care centres in Quebec saw no change in enrolment while market-fee centres reported a large decline. These results suggest it is not just COVID-induced job losses (or safety concerns) that lead parents stop using child care during the pandemic—high fees are also a driving force.

Since parent fees represent a significant chunk of revenues for child care providers in many provinces, including BC, significant declines in enrolment create financial challenges for providers, putting them at risk of not being able to cover costs (as rent, heat and electricity bills continue to accrue), and potentially forcing staff layoffs or even program closures. For example, market-fee centres in Quebec reported raising fees even higher to cope.

Recognizing this financial reality, the BC government provided Temporary Emergency Funding to child care providers between April and August 2020. These substantial, additional operating funds helped offset the financial precarity experienced across the sector.

Overall, the pandemic experience to date suggests that provinces where child care is publicly supported and actively regulated by provincial governments generally have lower fees and are in a better position to weather COVID-19-related disruptions.

In provinces where child care has largely been left to the market, providers risk losing valuable staff, worsening the existing crisis of recruitment and retention and resulting in the loss of desperately needed spaces. Increased and sustained public operational funding for child care providers is key to ensuring that women can return to work post-pandemic.

What does this mean for BC’s plans to implement $10-a-day child care?

The findings of this study reinforce the importance of public policy to address child care affordability: funding child care operations, together with setting maximum parent fees, are the best ways to stabilize parent fees and make them more affordable. BC is part way there. Our provincial child care fee reduction program made measurable progress on affordability but BC did not begin to set maximum fees until this year, which allowed fees to grow steeply.

The CCPA study also points to the risk of relying on a market-based approach to expand child care spaces. Regrettably, BC government initiatives to date have largely depended on individual organizations to develop new spaces and apply for a range of siloed public programs to fund them. Access to public funds has enabled for-profit providers to acquire real estate assets (child care facilities). This has helped to incentivize extensive growth in the for-profit child care sector, which this study found is significantly more expensive for parents and which other studies have documented tends to provide lower quality services.

The BC government made a strong commitment to key elements of child care system-building in the 2020 election. To achieve their commitments, it is essential that new public investments— both federal and provincial—are accountable for advancing a public system of high quality, affordable child care for all families who choose it across BC.

As recommended in the $10aDay Child Care Plan, the BC government needs to:

As we explained in an earlier article:

Like schools, child care facilities are a crucial part of our community infrastructure and government should play a leadership role in creating them. This would allow for proper capacity planning, creating quality spaces faster and more affordably, and ensuring that public investments create public—not private—assets. In fact, BC cannot transform the existing patchwork of child care services into a coherent quality system without a capital plan and budget for child care expansion—plus additional investments to recruit and retain well-qualified, fairly compensated educators to staff the system.

The provincial government will table its 2021 budget next month. It is an opportunity to course-correct by channeling the new, multi-year investments in child care to build an effective public system. Getting it right now will not only jump-start the pandemic recovery and advance gender equity, it will set up BC to become one of the best places to raise children in Canada.

Lynell Anderson, CPA, CGA, is a public policy researcher and community engagement specialist. Drawing on 35 years of experience as a professional accountant in the private, public, voluntary and academic sectors, Lynell analyzes and utilizes financial information to promote public accountability, engage communities and advocate for evidence-informed change. Her research and advocacy activities focus on public policies that advance the rights of children, women and families, especially with respect to child care services and youth in and from government care.

Lynell currently provides research and strategic leadership to the campaign advancing $10aDay Child Care for BC. She is also a research associate with the CCPA-BC and past Co-Chair of the Vancouver Joint Child Care Council. Follow Lynell on Twitter