The need for affordable child care

By Lynell Anderson and Eric Swanson

Canada is at a game changing moment when it comes to child care. Historic federal funding agreements with provinces and territories now support a vision for high-quality, accessible child care across the country.

Affordability is a top priority, with governments committing significant funds to reduce average child care fees by 50 per cent by the end of this year and $10aDay by 2026.

BC’s experience with child care fee reductions to date shows those funds absolutely must have effective safeguards. Otherwise, publicly subsidized fee reductions can be quickly swallowed by large fee increases charged by some operators, and families will be no further ahead.

Rising fees in BC

BC introduced its first publicly subsidized fee reduction (called the Child Care Fee Reduction Initiative or CCFRI) in 2018 and since then 93 per cent1 of eligible licensed, full-day programs have been receiving a monthly rebate of up to $350 per child.2 The idea was that programs then pass this on to families, who would end up paying up to $350 less per month.

However, data from the most recent Canadian Centre for Policy Alternatives’ (CCPA) annual survey of child care fees in large Canadian cities confirms that these intended savings are being eroded. For example, of the four BC cities covered by the surveys since 2018,3 fees in infant/toddler centres have increased faster than inflation: by an average of approximately four per cent per year in Vancouver, seven to eight per cent annually in Surrey and Burnaby, and by an eye-watering 20 per cent a year in Richmond.4

Figure 1 charts these annual increases in the median fees of infant/toddler child care centres over time. 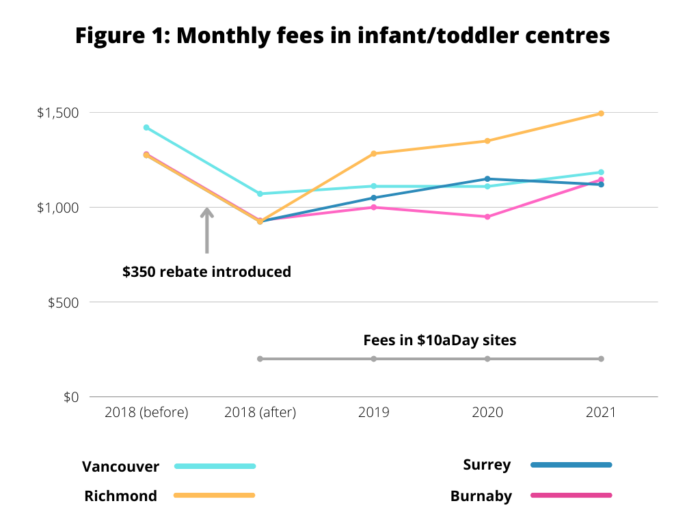 The chart shows the predicted drop in fees attributed to the introduction of the CCFRI, but then an upwards trend in all four cities thereafter. Figure 1 also reflects the introduction of 2,500 $10aDay spaces province-wide—a small proportion of overall spaces, which are shown to contrast their relative affordability and stability.

In Vancouver, Surrey and Burnaby this trend of rising fees means the value of the $350 rebate for families is being eroded, although it’s important to note that median 2021 fees in these three cities are still lower than they were pre-rebate.

In Richmond (orange line) the story is more drastic. Here, the benefit of the $350 rebate was eliminated in the span of a year, with fees continuing to climb until, in 2021, they ended up $220 higher than before the rebate program took effect. 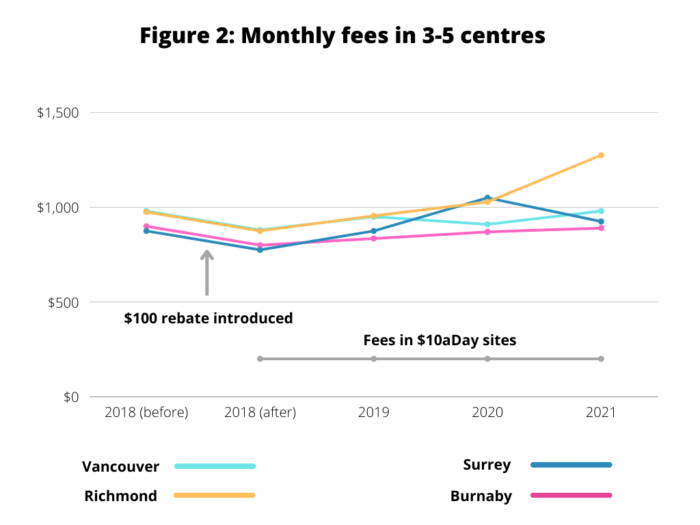 In Burnaby and Vancouver, this upward trend has more or less fully eroded the $100 rebate. In Surrey, median fees are now $50 per month higher than before the rebate, and a whopping $300 a month higher in Richmond.

First, rebates have not increased since they were introduced so some fee increases are expected to cover inflation and other cost pressures. Yet we’ve noted that these increases have outpaced inflation, significantly in some cases, despite the provincial government’s attempts to moderate them under CCFRI.6

So if not broad-based inflation, then what?

We’ve seen in Figures 1 and 2 that median fees since the introduction of CCFRI in 2018 have been increasing in all four cities for both infant/toddler and 3-5 year olds programs in child care centres.

However, when you compare what’s happening in non-profit vs. for-profit centres, a telling pattern emerges. 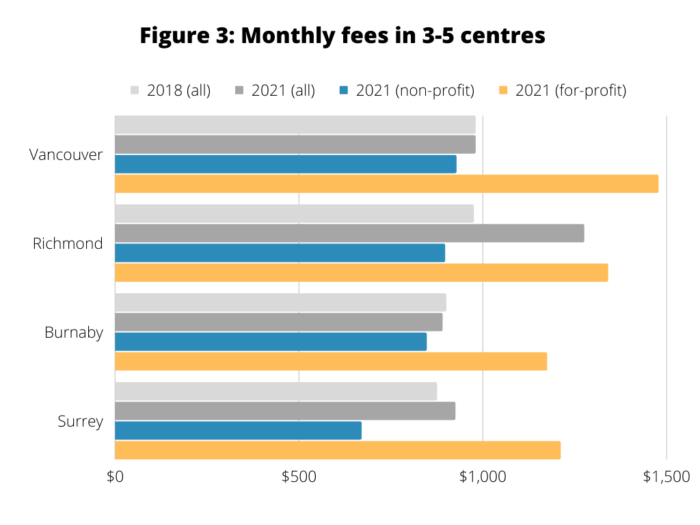 For example, Figure 3 shows that in all four cities non-profit fees in 2021 were lower than the median fees for all centres three years earlier (before the CCFRI rebate was introduced).7

In other words, Figure 3 shows the for-profit sector is substantially driving the overall fee increases in these programs (i.e., driving the erosion of BC’s publicly funded rebates), both in cities where for-profit centres are in the minority (e.g., in Vancouver, at 27 per cent of spaces) and where they are in the majority (e.g., in Richmond, at 81 per cent of spaces).10

BC has confirmed it will use the existing CCFRI funding program to achieve the targeted 50 per cent fee reduction later this year. Clearly, stronger accountability mechanisms must be added with particular attention to for-profit centres with high fees. The community-led Roadmap to $10aDay recommends that additional public funding be both adequate and accountable for achieving fair educator wages and caps on fees and fee increases, with accountability strengthened by public posting of fees and enhanced financial reporting.

The real solution, however, can be found in BC’s parallel and growing system of $10aDay child care, where fees are already capped and publicly funded programs can be accountable for ensuring that additional funding is used to increase quality and equitable access. Fortunately, a system of $10aDay fees is also the long-term vision of Canada’s national child care system.

When it comes to making child care more affordable, BC and Canada are on the right track, but if we don’t learn from BC’s recent experience with CCFRI we risk costly mistakes that erode benefits for both families and the public purse.

1. As reported by the BC government in the Budget Backgrounder updated March 22, 2022.

3.  Kelowna was added to the CCPA surveys starting in 2019. However, in this analysis we focus on the four cities that have been included in the annual surveys since the 2018 introduction of the CCFRI.

4. Compared to a baseline calculated by taking the median monthly fees reported by child care centres programs in the 2018 CCPA survey and subtracting the CCFRI amount of $350. Between 2018 and 2021, inflation averaged 2 per cent per year.

5. In 2018, infant/toddler fees were reported separately in the fee survey. They are averaged in this analysis in order to be more consistent with remaining years, which reported a combined infant/toddler rate.

6. Through the study period, BC’s CCFRI program attempted to limit annual fee increases in recipient programs by implementing a Ministry review process (e.g. as outlined on pp. 6-8 of the 2021/2022 CCFRI Funding Guidelines). Fee increases were to only receive approval if they were deemed to be (a) of a nominal amount; (b) if the facility’s parent fee at the time of application was below the median fee for the facility’s Service Delivery Area AND the requested fee increase(s) amount aligned with the provincial range of standard annual increases, (c) if the fee increase matched a historical pattern for that facility; or (d) reflected exceptional circumstances outlined by the facility. However, this Ministry review process hasn’t historically prevented new for-profit centres from opening up and charging much higher initial fees than existing facilities, a phenomenon that may account for a significant percentage of the overall increase in median fees over the study period. BC has since released new 2022/2023 CCFRI Funding Guidelines that establishes upper limits for fee increases, and limits fees charged by new facilities to at or below the regional 70th percentile fee.

9.We do not know for sure that all of the surveyed for-profits, captured by this city-specific data, are participating in CCFRI (for those who aren’t, their reported fees would skew the results somewhat higher); however, the high overall CCFRI participation rate across BC (93%) suggests this area of uncertainty is unlikely to alter the fundamental conclusion. Furthermore, any non-participation of for-profit centres in CCFRI raises its own questions (as those families would not be benefiting from the program).

Lynell Anderson, CPA, CGA, is a public policy researcher and community engagement specialist. Drawing on 35 years of experience as a professional accountant in the private, public, voluntary and academic sectors, Lynell analyzes and utilizes financial information to promote public accountability, engage communities and advocate for evidence-informed change. Her research and advocacy activities focus on public policies that advance the rights of children, women and families, especially with respect to child care services and youth in and from government care.

Lynell currently provides research and strategic leadership to the campaign advancing $10aDay Child Care for BC. She is also a research associate with the CCPA-BC and past Co-Chair of the Vancouver Joint Child Care Council. Follow Lynell on Twitter

Eric Swanson is a Principal of Third Space Planning, a policy and planning consultancy focused on child care, housing and climate change.