Premier Christy Clark rarely misses a chance to take credit for BC’s recent economic growth and job creation numbers even though they have more to do with plunging oil prices and the low dollar than with any action her government has taken. This year’s throne speech was no exception, calling BC “an island of prosperity” and a leader:

This rosy picture doesn’t square with recent polling which found that nearly half of British Columbians see the economic conditions in BC as “poor” or “very poor”. Two in five said they were planning to reduce the family spending on entertainment and meals in 2016.

Why such a big difference between government claims and the experience of households? Because the BC economy is not creating nearly as many jobs as the government would like you to believe and many of the jobs created are not good jobs.

The BC government is cherry-picking job creation figures

The throne speech claim of “more than 50,000 new jobs”, appears to be based on a comparison of employment in December 2015 to employment in December 2014, drawing on this Statistics Canada release. The December to December comparison looks so much better because job creation picked up in the second half of the year after a lacklustre performance over the first 6 months of 2015. This pick up is a good sign but it doesn’t erase slow jobs growth in early 2015.

All in, BC’s employment growth in 2015 wasn’t particularly strong – 27,800 new jobs represent only a 1.2% increase in employment. That’s enough to keep up with population growth, but it’s hardly something to brag about.

Many of BC’s new jobs are low paid and temporary

Statistics Canada’s new Job Vacancy and Wage Survey helps explain why so many British Columbians are feeling pessimistic about the economy. While BC had the highest vacancy rate of all provinces in the third quarter of 2015, BC’s job vacancies offered one of the lowest average wages in the country, $17.65/hour. Only job postings in PEI, NB and NS offered lower wages. 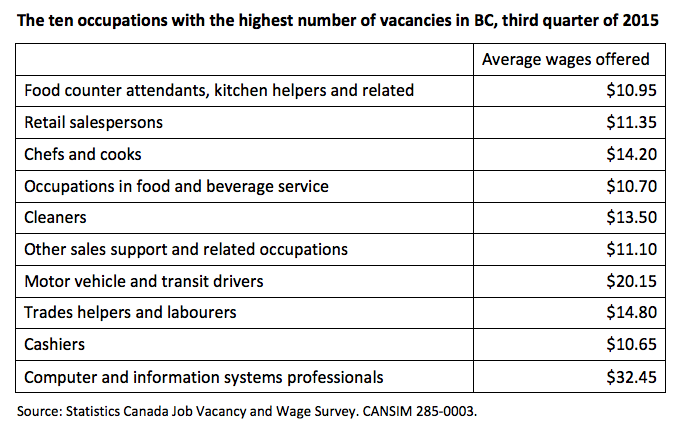 All new paid positions created in BC in 2015 were temporary. 53% of them were seasonal and another 41% were term or contract jobs (data here). Temporary jobs provide less job security and often come with few, if any benefits.

BC remains a long way off pre-recession employment levels

The pick up in job creation in the second half of 2015 is good news. But we can’t forget this employment growth comes on the heels of two years of particularly weak job creation, when the BC economy only added a total of 16,000 jobs. 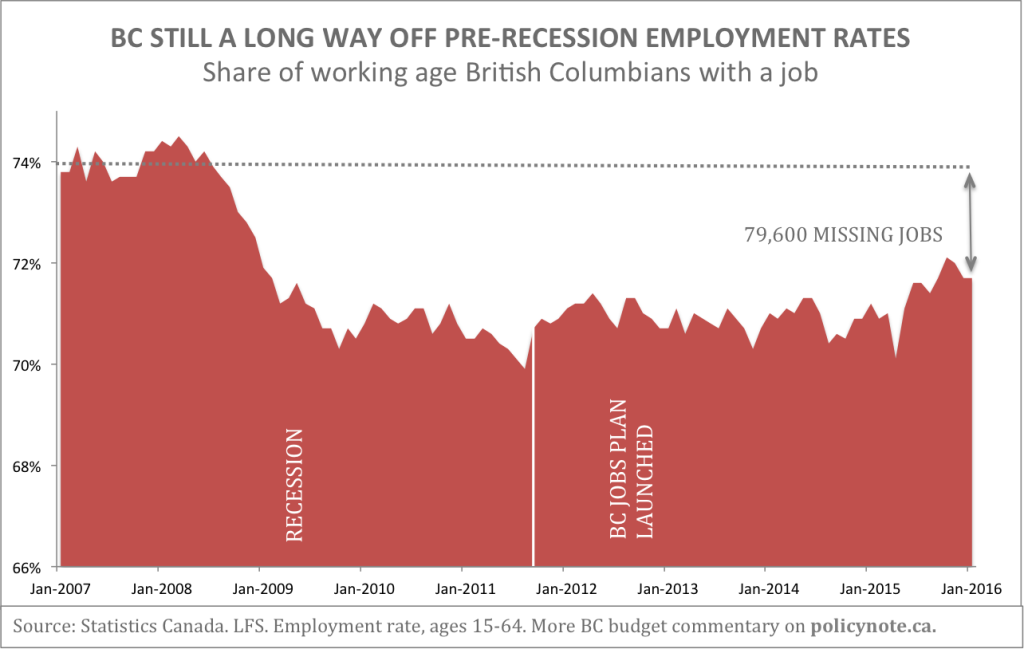 Looking at it this way, the BC Jobs Plan seems a lot less successful than the Premier claims it has been.