2015 marks the sixth year of BC’s recovery from the recession. But it’s been a slow and largely jobless recovery in BC.

1. BC needs 93,000 more jobs to return to our pre-recession employment rate (the proportion of working age British Columbians who have jobs). 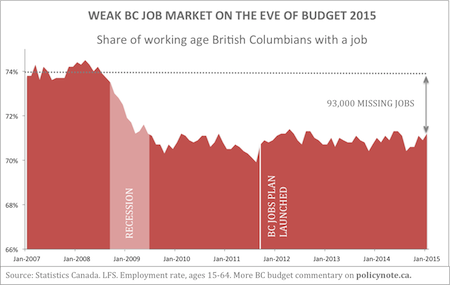 Only 71.2% of working age British Columbians have jobs today. This is practically the same share of workers with jobs as when the BC Jobs Plan was launched, and has barely improved since the recession.

In other words, the new jobs created in BC since 2009 have just kept up with population growth without replacing (or recovering) the jobs lost during the recession.

The only reason the unemployment rate is going down is because more people have stopped actively looking for work (the labour force participation rate is declining). This is a clear sign of job market weakness, not strength.

2. The total hours worked for pay in BC is lower now than before the recession.

The employment and unemployment statistics count a job as a job no matter if it’s a casual gig or a full-time permanent job, so it’s important to dig deeper. Here’s what we find when we do. The total hours worked for pay in BC in 2014 were fewer than in 2008, despite the fact that we now have more people working. BC is one of only three provinces that has yet to recover the total paid hours worked since before the recession. 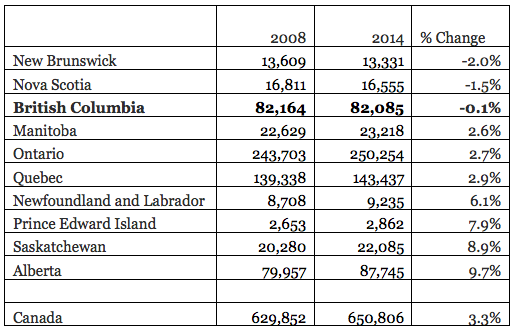 3. Median employment income in BC was lower in 2012 than pre-recession.

BC and Ontario are the only two provinces where the median employment income has not recovered its pre-recession purchasing power. The median is more representative of how the regular British Columbian families are doing than the average, which is skewed by a few very high salaries.

Today, the only provinces with lower median income than BC are the Atlantic provinces. Saskatchewan, Manitoba and Quebec used to have lower median earnings than BC before the recession, but wage growth during the recovery has moved them ahead of BC. Not that two of these three provinces do not have oil, so this is not a story about the oil boom. 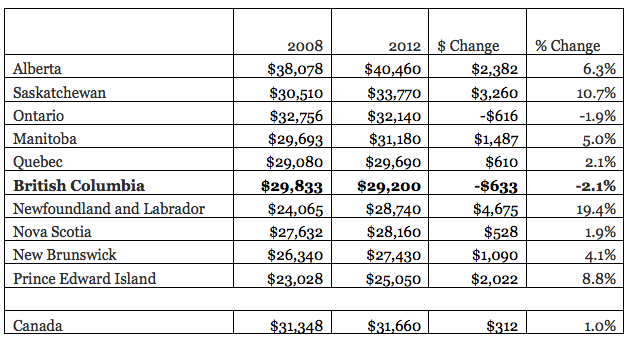 These 3 facts point to serious weakness in the BC job market on the eve of the provincial budget. They explain why many families continue to struggle with economic insecurity and poverty, and why British Columbians are taking on more and more debt. But weak income growth is also bad for the economy – it means less purchasing power and less domestic demand, which slows down growth.

At a time when the private sector is not investing, the BC government should be stepping in to boost the economy. Strategic investments in key areas including poverty reduction, universal, affordable child care, sustainable transportation, education, and community health services will strengthen our province and double as an effective Jobs Plan. This is what BC needs from Budget 2015.