BC has fiscal room to make lives better

Looking ahead to BC’s 2018 budget, strong public investment is needed more than ever if our province is to tackle the large and pressing problems before us. Fortunately, we have the economic and fiscal capacity to make significant reinvestments in our public sector and the critical services it provides.

The Budget Update also used cautious revenue forecasts relative to GDP so it is quite possible the baseline surpluses over these three years will be higher.

A remarkably consistent feature of the BC budget process under the previous government was underestimating budget surpluses—often by well over $1 billion (see Figure 2). In 11 of the past 15 years, the predicted budget balance on budget day has been more pessimistic than the actual year-end balance by hundreds of millions or by billions of dollars.1 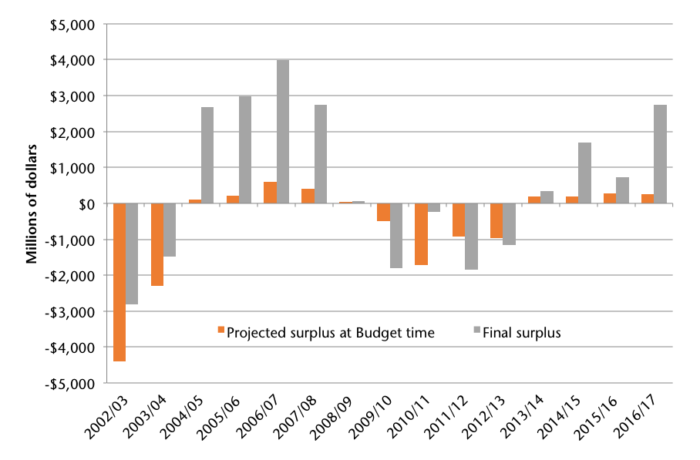 We reject this overly cautious approach to budgeting, which focuses too narrowly on producing an operating surplus and making the books look good for media headlines. When governments systematically underestimate the available resources, this distorts the scope of public debate on what is possible for British Columbians to achieve together through public investment.

Ultimately, what matters for BC’s fiscal health is not whether a year ends with a budget surplus but the debt-to-GDP ratio (i.e. the debt relative to the annual income of the economy) and debt service costs (i.e. the debt interest payments relative to the size of the budget). BC’s debt-to-GDP ratio is a manageable 16.2% for 2017/18, down from the post-recession peak of 17.9% in 2013/14. Debt servicing costs are at historic lows with just over five cents of every dollar of operating spending going to debt servicing. In fact, BC’s debt-to-GDP ratio is one of the lowest in the country and leaves room for addressing a backlog of important capital investments.

A $2.7 billion surplus in 2016/17 is a clear indication that the previous government turned a blind eye to the pressing challenges facing our province. Years of under-investment in public services leave BC’s new government with significant accumulated social and environmental deficits to address. When measured as a share of the economy, provincial operating spending has declined markedly since the late 1990s. As currently budgeted, it will continue downward even after including new spending commitments made in the September Budget Update. In concrete terms, if BC dedicated the same share of our more than $270 billion economy to public operating spending this fiscal year as we did in 2000, which would mean making additional investments of about $6 billion per year.

Instead, the underfunding and neglect of public services has help cause some enormous problems including failure to address an opioid crisis that has claimed thousands of lives; large class sizes in schools, colleges and universities, along with a growing reliance on foreign students who pay higher fees; inadequate protection for vulnerable children in care, which increases the likelihood of abuse; reduced access to public services like seniors’ care and community health services; and diminished ability to provide proper regulation and oversight, increasing the risk of disasters like the Mount Polley mine dam collapse.

BC’s fiscal situation is bolstered by two welcome tax measures announced in the September Update: restoration of the top tax bracket on individual income above $150,000 to 16.8%, and a one percentage point increase to the general corporate income tax rate (from 11% to 12%). Together, these measures will raise a projected $579 million in 2018/19 and help to make our tax system fairer.

The 50% reduction in Medical Services Plan (MSP) premiums—BC’s least fair tax—is also very welcome, but will reduce revenues by a projected $1.2 billion in 2018/19. The previous government had opted to forego these revenues entirely instead of replacing the funds raised by MSP with a combination of fairer personal and business taxes. As the new BC government moves towards fully phasing out MSP premiums, it should ensure that all MSP revenue is fully replaced. As our modelling has shown, this can be accomplished so that the vast majority of BC households have a lower total tax bill while also enjoying better-funded public services.

The new government has developed an ambitious platform for fixing public services and making life more affordable for British Columbians. To implement this platform and, as we recommend, to accelerate and expand it in key areas will require additional fiscal capacity. This can be created by further progressive tax increases.

In an analysis earlier this year, we demonstrated that personal tax cuts between 2000 and 2016 overwhelmingly benefited the wealthiest British Columbians while reducing provincial fiscal capacity. There is certainly room to raise additional revenue fairly and there is public support for changes to the provincial tax system to enable new or enhanced public services. Areas where additional revenues could be generated include measures to curb speculation and tax excessive windfall gains from the housing market, a review of natural resource royalties and the taxation of cannabis, which the federal government is in the process of legalizing.

Given pressing economic, social and environmental deficits facing BC, as well as historically low interest rates and regionally imbalanced job creation, we recommend the government boost borrowing to make strategic public capital investments in affordable housing, transportation and expanding health and education facilities, including investment in the facilities required to launch a universal, publicly funded system of early learning and child care.

These investments would strengthen the provincial economy and set the stage for balanced and inclusive growth moving forward. A strong, well-resourced public sector goes hand-in-hand with a healthy economy. In fact, it is often public spending—including ensuring staffing levels that create and enforce appropriate regulation—that creates the conditions for communities and businesses to thrive.

This post is part of a series based on the CCPA’s submission to the 2018 BC Budget Consultations. The submission highlighted key findings from our research and outlined our recommendations for the 2018 provincial budget.

Other posts from the series can be found here.