Asbestos-caused disease increasing in Canada, and many victims are women

For more than a century, it has been known that asbestos causes disease and death. But the asbestos industry suppressed scientific evidence, created lobby organizations and hi-jacked public policy. Canadians, and people around the world, have paid the price with their lives. The economic costs have also been enormous, with billions of dollars spent on health care costs, removal of asbestos from buildings and compensation for victims and their families.

Normally, a continuing epidemic of deaths such as this would be treated as a national crisis and the federal government would show leadership to address the crisis. But because the government has long supported the asbestos industry they have failed to take action. The government in fact created and was a member of the board of directors of the Chrysotile Institute, a lobby organization for the industry. The government gave millions of dollars to the institute over the years until public criticism forced them to stop in 2013 and the institute shut down. Industry propaganda promoting use of chrysotile asbestos in the Global South, which was published by the Chrysotile Institute, bears the official logo of the Canadian government.

New cases of mesothelioma in Canada doubled from 276 cases in 1992 to 560 in 2012 (latest data available from Statistics Canada). Of the 560, 105 were women. However, there is little recognition of the fact that women are also dying from asbestos-related diseases. There is even less support provided to women who are victims of asbestos than there is to men. Most of the deaths occur among construction workers, electricians, plumbers and others, mostly men, whose work brings them into contact with asbestos-containing materials. Women often do not know how or where they were exposed to asbestos and it is harder for them to prove their case and get compensation. Often they feel completely isolated, and if they were exposed to asbestos outside the workplace, they do not even receive workers’ compensation assistance. 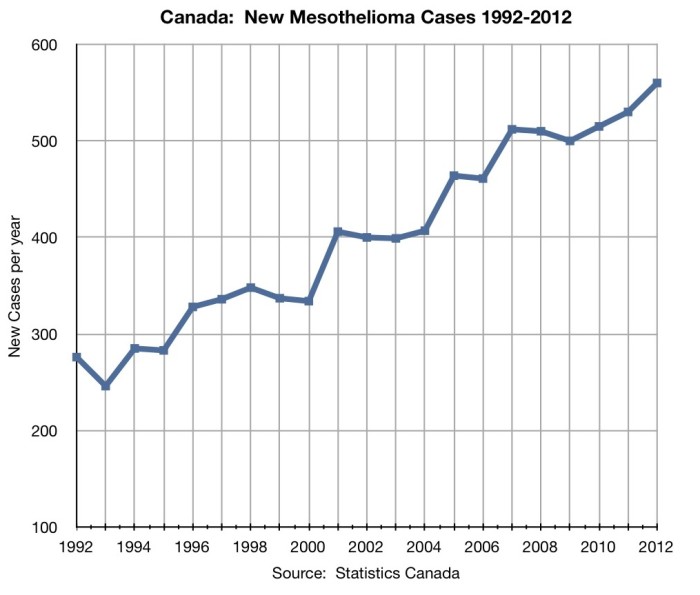 It is recognized that this data is not complete and does not capture all cases of mesothelioma. Furthermore, mesothelioma is only one of the diseases caused by asbestos. Asbestos exposure also causes asbestosis, and leads to far more cases of lung cancer and other cancers, such as cancers of the larynx and ovary, than cases of mesothelioma. However, when people get cancers, it is rare that there is an investigation into whether they were exposed to asbestos 30 or 40 years prior.

The new federal government has said that it will uphold scientific evidence and the public interest. To date, Canadian government policy on asbestos has been set by the asbestos industry, not science. It is time for the Trudeau government to end the decades-long complicity between the asbestos industry and the Canadian government. Prime Minister Justin Trudeau and Health Minister Jane Philpott must show the kind of leadership that Canadians hoped for in electing them.

Health experts and civil society organizations in Canada and around the world have asked the Prime Minister and Health Minister to respect science, protect health and ban asbestos so that no more Canadians die needlessly and to show the world that Canada’s historic role of leading global promoter of the asbestos industry has finally ended.

It is time for the Trudeau government to put its values into action and ban asbestos. This would keep asbestos-containing goods out of our country as well as having an enormous impact on helping to stop the shipment of huge amounts of asbestos to the Global South.

An earlier version of this post was published on RightOnCanada.ca.