In the fifth year of a slow and largely jobless economic recovery, the 2014 BC Budget should prioritize measures to set the foundation of a more just and sustainable economy, where prosperity is shared by all citizens. Here are 7 initiatives that will get us there.

Combating poverty is the perfect investment during a slow recovery — it will provide an immediate boost to the provincial economy, as lower income families are able to buy more goods and services from local businesses, and will produce considerable savings over the long run.

Tolerating high rates of poverty and homelessness is unfair and unnecessary in a wealthy country like Canada. It’s also very expensive both for the BC government and for society as a whole. We spend between $8.1 to $9.2 billion annually in higher costs to the criminal justice system, in lost productivity, lower school success, and higher health costs. That’s huge; it’s close to 5% of the total value of our economy.

For years, the BC government have insisted their economic development measures would automatically take care of poverty. It hasn’t happened. BC has had the highest or second-highest poverty rate in Canada for ten years straight, a period including both an economic boom and a recession. One in five BC children lives in a family with income below Statistics Canada’s Market Basket Measure.

Funding priorities include immediately increasing income assistance rates, which have been frozen for seven years and have had their value eroded by inflation and building new social housing units to meet the needs of our growing population. Eventually, income assistance rates must be set to a level that meets actual costs of living in the province and indexed to inflation. The BC Poverty Reduction Coalition has more details on what a comprehensive plan would include.

Current funding models for municipalities and for TransLink do not meet BC’s need for modern transportation infrastructure that is essential for communities and businesses. The budget needs to address this gap.

Upgrading and expanding our transportation infrastructure is a necessity, the question isn’t if but when we do it. Currently, interest rates are at rock bottom levels. It’s a great time to borrow to make capital investments and initiating major construction projects now will boost BC’s weak job market.

Since the infrastructure we build today will serve BC over the next 30 – 50 years, it’s important to make sure it’s as sustainable as possible. The government’s decision to put TransLink funding increases to referendum, while other transportation infrastructure investments can just get decided on by government, puts an unfairly high burden for the justification of public transit projects.

BC needs a long-term infrastructure investment plan similar to the federal 10-year Building Canada Plan to ensure that all communities have access to viable transportation options – including a mix of roads and transit – to move goods and people efficiently. Getting more people out of their cars and on transit frees up the road for the movement of goods and for those who do need to drive because they work in remote and inaccessible areas. It’s good for business, it improves air quality, boosts health and it helps our fight against climate change.

Budget 2014 must recommit to climate action. Providing subsidies for energy retrofits for homes, building on the LiveSmart BC program. Funding should also be made available to make schools, hospitals and other public buildings more energy efficient. Such initiatives will create jobs in construction province-wide, reduce energy consumption and help us meet our climate goals.

Instead of providing subsidies to the oil and gas industry that directly contradict BC’s climate action plan, Budget 2014 should increase support for research and development into new green technologies.

BC families are facing an affordability crisis in housing and childcare. It’s no surprise that household debt is record-high and continues to increase. Childcare bills can run upwards of $20,000 per year for a young child, higher than university tuition, and quality licensed spaces are too few.

Investing in more accessible and affordable quality child care will have ripple effects across the economy – it will take some pressure off young working families, freeing up resources to pay off their student and mortgage debt, it will provide a good start for all BC children, it will allow more mothers to participate in the workforce, increasing tax revenues almost immediately (as BC has low female labour force participation compared to the rest of the country), and it will create new jobs.

An expansion of community-based prevention and mental health initiatives, as well as seniors care services is another key area the 2014 Budget must address. The lack of these services puts pressure on the most expensive part of the healthcare system – emergency rooms and hospitals, costing us more over the long term.

Skills training has nominally been a priority for government since the Jobs Plan was announced in September 2011, but very little new funding has been provided so far. The increases in higher education funding provided in the June 2013 BC Budget Update do not even cover inflation, let alone any expansion in programs (a measly 0.6% increase in funding for higher education was budgeted for 2014 and 1.3% for 2015).

As part of the newly announced 10-year skills training action plan, BC Budget 2014 must provide adequate funding to expand access to programs in high demand and make training programs more affordable for students.

Besides training, BC youth need targeted employment programs. Youth unemployment in BC may not be as high as in some European countries, but there are 40,000 fewer young people working than before the recession. There is some evidence that youth underemployment is an even bigger problem, with a large number of youth with post-secondary education working in low skilled jobs in retail or food services.

6. Measures to improve the fairness of the tax system

BC’s overall tax system is now remarkably regressive as this report shows. When all personal taxes are considered (income, sales, property, carbon, and MSP premiums), the higher your income, the lower your total provincial tax rate.

BC needs a Fair Tax Commission to objectively review the BC taxation system and make recommendations for meeting provincial revenue needs in an equitable way consistent with our economic development and climate action goals. All taxes and natural resource royalty programs should be on the table.

As a priority item, Budget 2014 must freeze MSP premiums, which have increased annually for the last five years. As of January 2014, MSP costs $831 per year for a single individual, taking a much bigger bite out of the income of someone making $40,000 per year than for someone making $250,000. The provincial government now collects almost as much revenue from MSP premiums as it gets from corporate income taxes.

Budget 2014 is expected to set out a framework for taxing LNG exports, but it must also ensure that BC gets a fair return on our other key natural resources too. Resource royalties have fallen in half compared to their peak in 2005/06.

BC is producing record high volumes of natural gas, but the natural gas royalty revenues are near historic low levels. We used to get well over $1 billion a year from natural gas royalties, peaking at close to $2 billion in 2005/06, but since the recession we’ve been getting a small fraction of that ($362 million projected this year).

This chart from a 2013 report by the Ministry of Natural Gas Development shows the dramatic reduction in royalties charged per volume of gas produced. 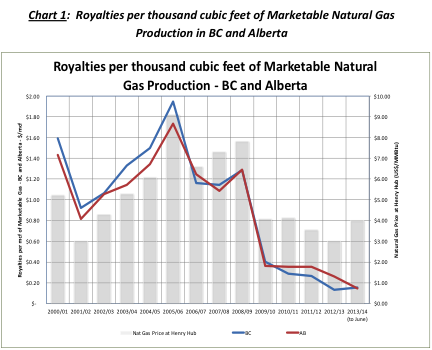 Our research suggests there’s room for collecting more rents and royalties from key public resources—our forests, natural gas, and water. Rents from non-renewable resources should be invested in a Norway-style Heritage Fund for future generations instead of being rolled into general revenues and used on current operating spending.

What about the fiscal budget balance?

The budget measures outlined above will help reduce a number of deficits facing our province: our large social deficit in poverty and inequality, the environmental deficit, the jobs deficit and the affordability deficit.

Failing to make these investments today is a false economy – it makes the books look good today, but it sets us up on a path of lower productivity, increased social ills and higher total costs over the long run.

BC’s finances are in good shape and we can afford to borrow a little more to make key public investments. With sufficient revenue reform — items 6 and 7 — they can be achieved without running a large fiscal deficit (examples in this 2013 report).