1. Budget 2015 ends the claw-back on child support payments for single parents on welfare. This is estimated to put $13 million in the hands of some of the poorest British Columbians. It’s a good step forward, but it is very very small. $13 million is three hundredths of one percent of the provincial budget. 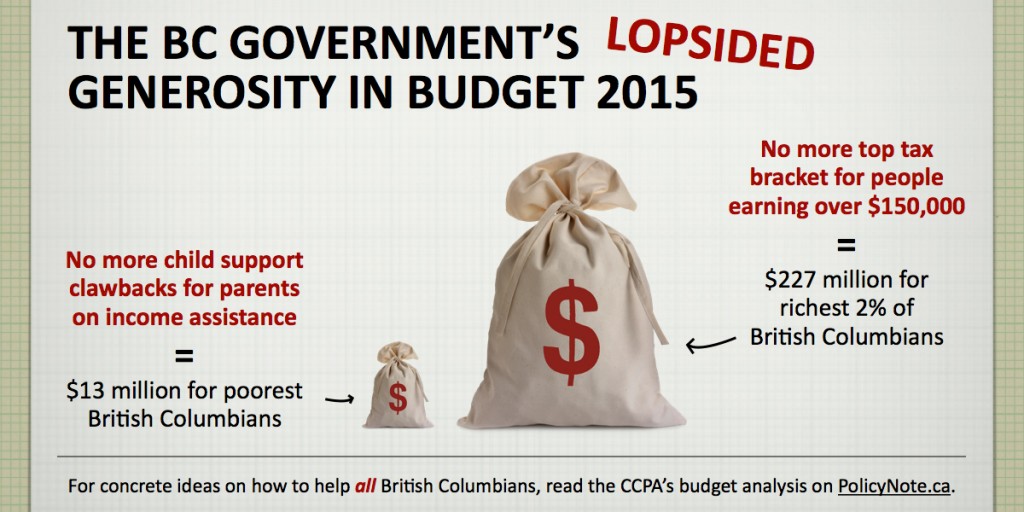 2. BC remains the only province in Canada without a poverty reduction plan. There is also no money in the budget to increase income assistance rates, which have been frozen since 2007. This is despite the fact that the bi-partisan committee of MLAs who conduced this year’s pre-budget consultations unanimously recommended these in the pre-Budget consultation report:

The government deserves credit for ending the clawback of child support payments from income assistance, but that is one of the cheapest items on the list that affects the fewest people. What about all the others?

4. Budget 2015 underfunds key public services. Spending increases to health care and education are failing to keep up with inflation and population growth. Overall government spending is projected to decline when adjusted for population and inflation in each of the next 3 years. The government’s fiscal policy of restraint is putting the breaks on economic growth.

5. Running a surplus does not mean that BC is prospering. The job market remains weak, many families to struggle with economic insecurity and poverty, and our colleges and universities are delaying necessary building repairs for lack of funds. This is like balancing your family budget by not feeding the kids and not fixing the leaky roof – it’s penny wise and pound foolish, ignoring the future costs of today’s neglect.

6. BC spends more every year providing tax credits to corporations than to low income individuals. Tax transfers to individuals, include programs like the sales tax credit, the early childhood tax benefit, the low income climate action benefit, the seniors home renovation tax credit – and cost the BC government $460 million combined compared to tax credits to corporations ($516 million this fiscal year, projected to grow in the future).

7. Despite ending last year with a nearly $1 billion surplus and projected surpluses going forward, Budget 2015 ignores a number of important recommendations coming out of this year’s pre-Budget consultation report that would have greatly improved the lives of some of the most vulnerable British Columbians. This is despite the fact that the recommendations were approved unanimously by a bi-partisan committee of MLAs.

# 38: Examine the persons with disability (PWD) rate and consider increases to reflect higher costs of living.

# 40: Provide funding and support for the development and implementation of a child care plan.

# 41: Work with the federal government to increase access to affordable social and co-op housing, especially for people with disabilities, and to ensure continuation of operating agreements with existing housing co-operatives.

8. The BC Early Childhood Tax Benefit, which was originally announced in BC Budget 2013, is too small to make a real difference for families: the maximum benefit is $55 a month, whereas child care fees run on average range from $900-$1,400 a month, depending on the age of the child.

Putting the money into a first stage of a public universal child care plan (as the Budget Consultation report recommended) would have been a wiser spending decision.

The total cost of the BC Early Childhood Tax benefit ($146 million per year) is lower than the tax cut that the richest 2% of British Columbians are getting ($227 million).

9. BC is not getting a fair return on our publicly owned natural resources. Natural resource revenues are projected to fall by 7% in 2015/16. Revenue from resource royalties is at a near record low, even as natural gas production is at an all-time high.

10. Budget 2015 admits defeat on the BC Jobs Plan. In Table 3.6.3 on p.80, the government projects that job growth would continue to be lower than the growth of the working age population until at least 2019. [correction: earlier version said 2014]

11. There is no action on climate change in this budget. This is disturbing, as we see an increase in severe weather events and other consequences of climate change.

The carbon tax, which was supposed to be revenue neutral, is continuing to give away $400 million per year more in tax cuts than it collects in revenues. Most of those are funding business tax cuts. If we made the carbon tax truly revenue neutral, BC would have an additional $400 million every year to spend on meaningful climate action investments.

Budgets are about choices and priorities.

We ended 2014 with nearly $1 billion surplus. The economy is projected to grow by 13% over the next three years (nominal GDP). The government can no longer plead poverty and can certainly afford to begin implementing the $10/day child care plan, a comprehensive poverty reduction plan.

Unfortunately, Budget 2015 prioritizes recording a large surplus over real action on pressing economic, social and environmental problems. This is a short-sighted budget that lacks vision and leadership.

BC Budget 2015 confirms it: we can afford the $10aDay Child Care Plan