Will the BC government continue to ignore its own budget consultation?

Every fall, BC conducts a month-long budget consultation process and for at least the last three years, the provincial government hasn’t acted on its own report. You have to wonder if they’re actually listening.

This is a shame because the process generates a large number of good ideas and policy recommendations, which if implemented would strengthen our communities, diversify our economy and better manage our natural resources.

The consultation process generates a large number of good ideas, which if implemented would strengthen our communities, diversify our economy and better manage our natural resources.

Here’s how the process works. A bi-partisan committee of MLAs holds public hearings across the province and solicits submissions online (and by mail), as well as running an online survey. The Committee then prepares a report outlining the concerns raised by individuals and organizations, and making recommendations for the next provincial budget based on this public input.

For the last four years, these recommendations—unanimously approved by the bi-partisan Committee—have included an affordable childcare plan, a review of welfare rates and a poverty reduction strategy. Yet, none of these things have happened.

Below are some key recommendations from this year’s BC Budget Consultation report, which the provincial government should act on. A number of them would be familiar to this blog’s readers as they are recommendations the CCPA-BC has put forward in our own submission to the consultation. I’ve organized them by key priority area.

While the BC Budget Consultation report did not endorse it by name, the type of child care investment recommended captures the three key characteristics of the $10-a-Day Child Care Plan, which the CCPA-BC has endorsed.

Provide funding and support for the development and implementation of an affordable, accessible and high-quality childcare plan. (This also appeared in the 2015, 2014 and 2013 reports.)

The BC Budget Consultation recommendation is the same as what the CCPA-BC recommended.

Develop a comprehensive and integrated poverty reduction strategy, including legislated timelines and targets for the reduction of poverty (including child poverty) and homelessness in BC. (This also appeared in the 2015, 2014 and 2013 reports.)

Another of the Committee’s recommendation zeros in on one of the immediate actions we’d like to see under a comprehensive poverty-reduction plan – an increase in social assistance rates, which have been frozen for nine years. This is the fourth year this recommendation has been made.

Review current income assistance and disability (PWD) rates and consider increases to reflect the cost of living in BC, including an examination of the provincial housing and rental accommodation cost differentials. (Similar recommendations appeared in the 2015, 2014 and 2013 reports.)

This year’s Budget consultation process took place shortly after the start of the school year when the funding crisis in BC public schools was front and centre in people’s minds. Nearly half of the respondents in the government’s online survey identified K-12 education as the priority area of investment in their region. 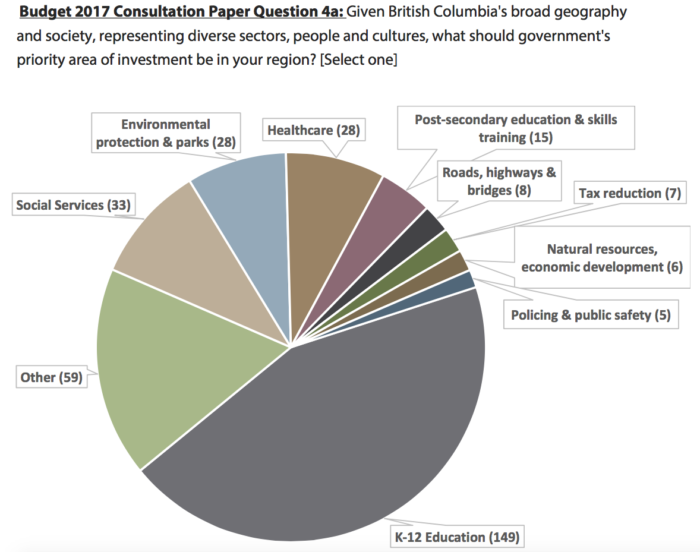 A number of recommendations in the Budget Consultation report address the K-12 sector, including:

Provide adequate capital funding to urban and rural school districts for facility improvements, seismic upgrades and additional schools in rapidly growing communities. (This also appeared in the 2015, 2014 and 2013 reports.)

Address inequities in the Ministry of Education funding formula, including discrepancies in the programs and services offered in rural or urban communities, as well as in administrative staff compensation levels. (This also appeared in the 2015 report.)

Provide predictable, sustainable and adequate yearly funding to enable school districts to fulfill their responsibility to continue to provide access to quality public education, with recognition of the increased costs that school districts have incurred. (This also appeared in 2015 and 2014 reports.)

Increase funding to provide services and supports for vulnerable students and students with special needs and develop a more equitable distribution process of this funding.

The Committee also recommended restoring adult basic education funding, something that has been on the radar for the last three years.

Reinstate tuition-free English as a Second Language (ESL), Adult Basic Education (ABE) and adult special education programs. (This also appeared in some form in the 2015, 2014 and 2013 reports.)

Provide stable and predictable multi-year funding for coordinated community literacy programs and services. (This also appeared in 2015, 2014 and 2013 reports.)

A range of recommendations in the report echo CCPA-BC’s call for a reinvestment in home and community care for seniors as well as improving patient care by developing interdisciplinary teams of healthcare professionals who work closely together.

Expand the scope of practice for health care professionals and create a multi-disciplinary team approach, including but not limited to: nurse practitioners, chiropractors, optometrists, physiotherapists, dieticians and pharmacists.

The BC budget consultation made four recommendations on housing issues this year. These include a review and expansion of rental assistance programs for vulnerable populations (such as SAFER), a review of the Residential Tenancy Act, including stronger protections for tenants facing eviction, and more incentive for the private sector to build more purpose-built rentals. The fourth recommendation is less clear and coins a new term, attainable housing. This term is not defined in the report and it is not common in this sector.

Work with all levels of government, as well as the private sector, to create a comprehensive strategy for attainable housing.

The BC budget consultation recommendations on clean energy and climate change are not ambitious enough. While a Clean Infrastructure Fund to expedite the transition to renewable sources of energy is a good idea, much of the other recommendations boil down to boutique tax cuts for better-off individuals and businesses that can afford to switch to clean energy and electric vehicles.

What is missing is a climate justice component, and more specifically funding for energy-efficiency upgrades of the existing affordable housing stock and for lower-income renters who don’t have much control over the energy-efficiency of their homes.

Also missing is a call to invest in energy-efficiency upgrades for schools, hospitals and other public buildings to reduce their carbon footprint.

On the carbon tax, the Committee fell short of recommending the kind of increases the CCPA-BC would like to see (accompanied by a more-generous low-income tax credit), but did recommend periodic reviews of the tax.

Conduct periodic reviews of the application of the Carbon Tax, including identifying opportunities to mitigate any impact(s) on emission-intensive or trade-exposed sectors and industries, as well as its continued effectiveness in reducing emissions.

Infrastructure investments, including in public transit

The report makes a number of important recommendations on these long-neglected issues, including:

Provide more affordable and accessible transportation options and services to persons with disabilities and seniors in urban and rural communities, including HandyDART and accessible taxis.

Ensure long-term, stable funding for transportation and public transit infrastructure improvements. (This also appeared in the 2015 and 2014 reports.)

Also recommended are investments in cycling and pedestrian infrastructure, long-term funding for the U-Pass program (subsidized bus pass for university and college students), and highway safety investments in rural areas.

Some of CCPA-BC’s key priorities on revitalizing forestry are reflected in the budget consultation report, for example, the call to ensure adequate staffing levels in natural resource ministries to enable meaningful monitoring and enforcement as well as:

Revitalize the forest industry and maximize job opportunities for British Columbians, including through strategic partnerships with First Nations and local communities.

Tax fairness is another area where the Committee recommendations fall short of what we’d like to see. The highly regressive MSP tax is singled out with a recommendation to review other jurisdictions for alternative models of the tax (a recommendation also made last year). Instead, we’d like to see MSP eliminated and recently published a report modelling two specific options to show how it can be done.

All in all, there is significant overlap between the CCPA’s recommendation for BC Budget 2017 and the recommendations in the government’s own budget consultation report. Taken together, these recommendations constitute a broad and ambitious public investment plan to reduce poverty, tackle our climate challenges, improve access to housing, health care and education for all ages in all areas of the province, and generally put in place the kind of policies that would allow us to share prosperity more broadly instead of seeing the benefits concentrated in the hands of a small wealthy elite.

The public support for these public investments is evident. The resources are available. All that’s needed now is a government that’s willing to act on the recommendations from its own public consultation process.