In a “bulletin” released yesterday, the Fraser Institute points out that public investment in BC has been extremely low since 2001, with real per capita program spending growth of only 0.9% annually—the lowest in the country. On this much, we agree.

But the Fraser Institute’s odd conclusion is that, because public investment has been low for so long, now is the perfect time to, well, continue not investing in badly needed services. If we start dedicating new funding to housing, childcare, transit, climate action and raising people out of poverty, the argument goes, we’ll be on the road to financial ruin.

But this is, quite simply, ridiculous.

As we at the CCPA have long pointed out, failing to act on the social, economic and environmental crises we face in BC carries a tremendous cost. Literally millions and millions of dollars in costs—not to mention the harm to people and communities around our province.

The reality is we are an enormously wealthy province, and we have every ability to overcome the large social problems before us. Indeed, there was no reason to wait this long.

BC’s shamefully high levels of poverty come at a huge price: our research shows between $8.1 billion and $9.2 billion is lost annually in economic output and other costs. Lack of affordable child care shrinks our economy by keeping thousands of young parents—mostly women—out of the workforce. Failure to invest in housing or take action on real estate speculation has led to an affordability crisis in a growing number of communities—a massive stress on all but the wealthy, including businesses that find themselves unable to recruit workers. BC wastes hundreds of millions of dollars annually on unnecessarily high drug costs, instead of reaping the large cost savings that would come with universal pharmacare. Failure to invest adequately in public transit leaves our cities choked with traffic congestion, pollution and crashes—and each is hugely costly.

The reality is we are an enormously wealthy province, and we have every ability to overcome the large social problems before us. Indeed, there was no reason to wait this long. As I pointed out in a recent post, provincial public spending as a share of our total economy has declined substantially since the late 1990s. And, the new spending commitments announced in last September’s budget update are not large enough to buck that trend. 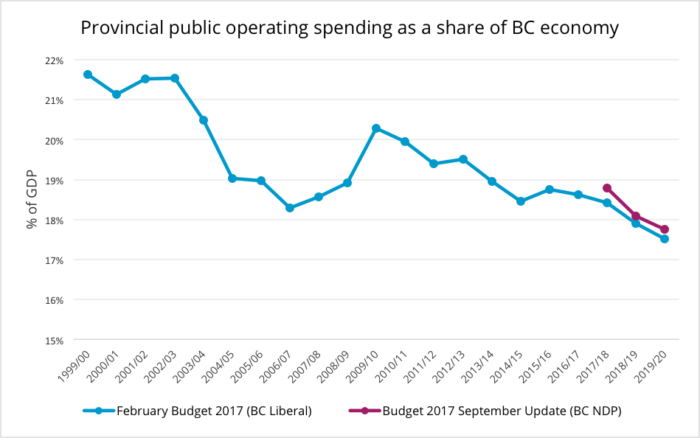 BC’s economy generates $276 billion annually. If we dedicated the same share of our economy to public spending this fiscal year as we did in 2000, it would mean additional investments of more than $6 billion per year. Had we kept public spending at this level the whole time, we wouldn’t be in this mess. Indeed, we could have prevented needless pain and avoided significant economic waste.

It’s also worth keeping in mind who did benefit from low public spending and ‘tax cuts’ in BC. Our analysis of the personal tax changes made between 2000 and 2016 shows they overwhelmingly benefited the richest British Columbians. Households in the richest 1% have pocketed $39,000 a year, while those in the bottom 50% saved an average of just $53 from their tax reduction.

The Fraser Institute, shoring up the interests of corporations and the wealthy, is again trying to convince us that we have no choice but to continue an agenda of austerity. Clearly public patience for these stale arguments has run out.

In short, the Institute is right that public spending in BC has been very low since 2001 (and we’re glad they’ve come around to acknowledging what we’ve been pointing out for years!). But they are completely off-base about why this matters and what our province needs to do next.