Responding to news of Ontario’s latest minimum wage increase (to $10.25 per hour), BC’s labour minister Murray Coell held firm on his government’s commitment to leave BC’s $8 minimum wage unchanged. The Minister seems convinced that the tax cuts over the last decade were so beneficial to low wage workers in the province, that they don’t need a raise. As he explains to the Vancouver Sun reporters (quoted here):

The after-tax dollars for someone at minimum wage in this province is quite good compared to some of the other provinces that have a higher minimum wage.

This isn’t the first time that the government has used the low taxes argument to dismiss calls for higher minimum wages, but has anybody bothered to check whether their logic is correct? Do BC’s low taxes make up for the low minimum wages we pay?

There are reasons to be skeptical of the Minister’s assertions: previous CCPA research has documented that BC’s personal income tax cuts disproportionately benefited higher income taxpayers. 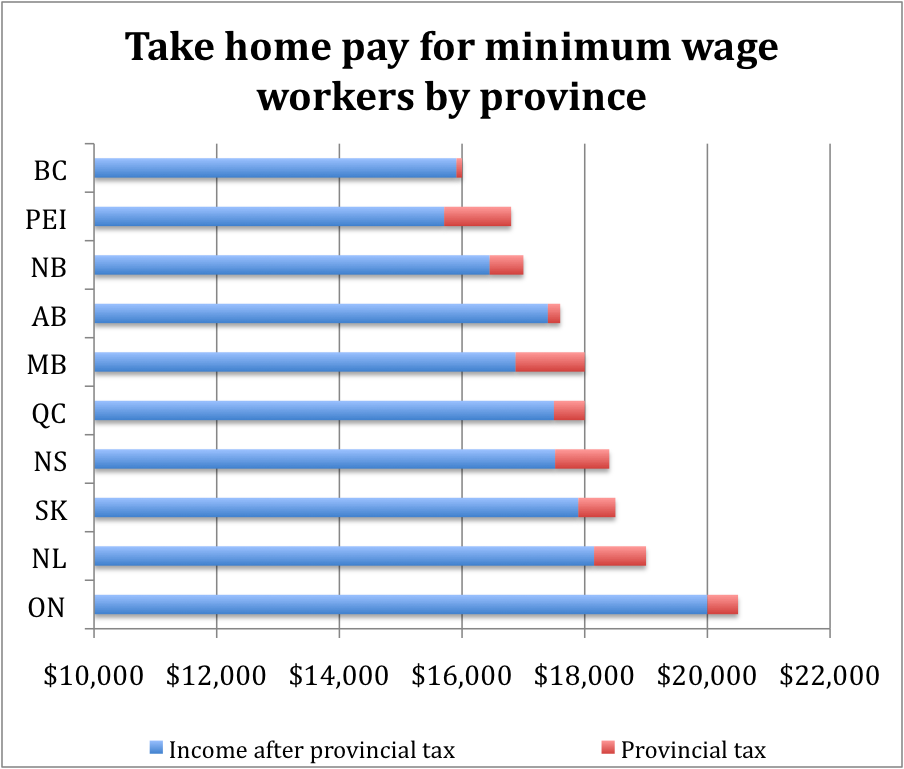 To make this graph, I used the provincial personal income tax comparison published in the 2010 BC Budget (appendix table A3). The income levels compared start at $10,000 and go up in $10,000 increments, so I wasn’t able to get at the tax level for the exact minimum wage incomes. I used the tax payable at income of $20,000, which is more than what the minimum wage worker would owe in all provinces except Ontario (because they earn less than $20,000). Even at these overestimated tax levels, the extra income that higher minimum wages bring more than offsets the extra taxes owing, leaving workers better off (see table).

BC may be home of the lowest tax rates, but it’s also home of the highest after-tax poverty rate in the country – 11.1% of British Columbians lived on after-tax incomes below Statistics Canada’s low income cut off rate in 2007.

Minister Coell, take note: even if you don’t tax low wage workers at all, they only earn so much. There are many low wage workers in BC who would be much better off if they could earn higher wages even if they had to pay slightly higher taxes on them.

The problems with the textbook analysis of minimum wages

Which is more important, lower taxes or a higher minimum wage?