The problems with the textbook analysis of minimum wages

I’ve been thinking a lot lately about the sorry state of the BC minimum wage, stuck at $8 after nine years two months and still counting. Yes, it will likely increase very soon, now that almost all leadership candidates on both sides have expressed support for higher minimum wages, but one has got to ask why it took so long.

A big part of the resistance to any increases seams to come from the commonly held — and untrue — belief that minimum wage hikes are a huge job killer. Why is this idea so pervasive in the media and in the minds of our legislators when it is not supported by the evidence? In fact, the empirical evidence hardly has anything to do with it since most people — including many trained economists — firmly believe that minimum wages increases kill jobs without having looked at any studies on the matter (if you want a quick summary of the state of the evidence, read this).

I am convinced that it’s those Intro to Economics classes that are to blame. Most media commentators and politicians have taken one, and they’ve all seen the following supply-and-demand diagram that shows the hypothetical effects of the minimum wage (or an increase of the minimum wage) in the labour market. 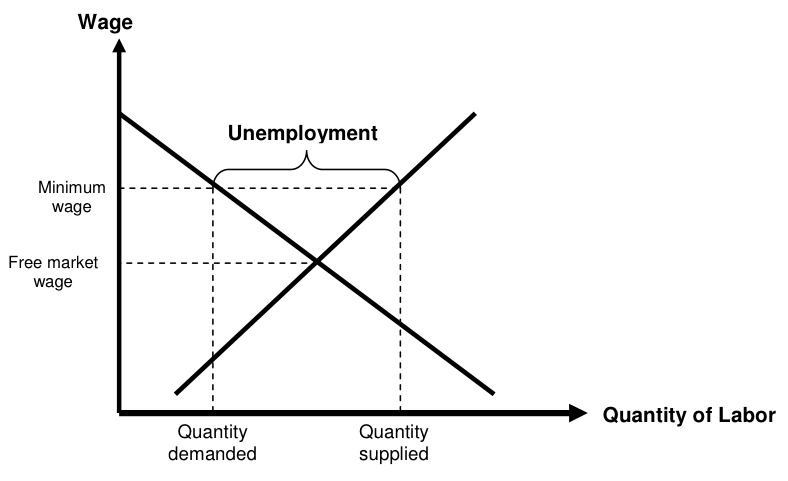 This simple diagram, which is staple of the introductory economics textbooks, is as misleading as it is powerful.

It makes you believe that that the minimum wage is set far above what a free-market wage would be in the labour market, which hardly ever happens. Because of that, the minimum wage is predicted to lead to a large increase in unemployment, which is defined as the number of people who have looked for work in the two weeks prior to being surveyed and who were not able to find work. By extension, any minimum wage increases would only move us into even higher unemployment territory. It makes sense intuitively and most people just accept that this is what actually happens in the real world without thinking twice.

But here’s what’s wrong with this graph in the words of Princeton University Professor of Economics Uwe Reinhardt, whose tongue-in-cheek essay The Art of Siffing Among Seasoned Adults: Can Economists be Trusted is an excellent read and must make for a highly satisfying first lecture:

In fact, however, the proposed minimum wage typically is just a shade above the prevailing free-market wage, or proposed increases are quite small relative to prevailing wage levels. In fact, they typically are so small as to have no perceptible effect on employment at all. Yet thousands of legislators, when confronted with minimum wage legislation, will automatically think back to their college economics courses and conjure up in their minds the dramatic illustration shown below.

A crucial detail about this graph that is often lost on unsuspecting economics learners is that the wage on that y-axis is expressed in real terms (i.e. adjusted for inflation) and not in straight up dollars. This means that if we’re looking at minimum wage policy over time, the only increases of the minimum wage that could be hypothesized to have any effects on unemployment are the increases after adjusting for inflation. In other words, regularly scheduled minimum wage increases to offset inflation would have no effect on the level of unemployment in equilibrium.

For the record, if BC had a policy of annually adjusting the minimum wage for inflation, we’d now be sitting at a minimum wage of $9.31.

Another big problem of the standard economics 101 approach to minimum wages is that the textbooks too often forget to tell students why governments would want to introduce regulations and constraints on the labour market in the first place. It is surprising how often the historical and political context is stripped out of the teaching of economics which makes both for poor education and for poor policy-making, once students try to apply these textbook graphs directly to the real world we live in.

It should be remembered that BC first introduced minimum wages (which at that time only applied to women) in 1918 because legislators wanted to protect vulnerable workers (in that case, women) from being exploited by employers. The reason why we have a complex system of employment standards and regulations is to promote fairer treatment of employees who don’t seem to do so well in the unconstrained markets (sweatshops, anyone?).

A decent minimum wage is a useful tool for addressing the huge disparities in the wage distribution that have emerged over the last 30 years in our province. Ensuring that minimum wage work pays enough to keep full-time, full-year workers out of poverty will make for a fairer BC and should be top priority for BC’s next Premier.

Refuting the tired claims of those opposed to minimum wage increases