A surplus at all costs? Balanced budget fixation hurts BC

Almost every year at budget time, BC governments of all stripes predict public coffers are going to be worse off than they’re likely truly expecting. This habit is usually portrayed as harmless or even prudent, but when the budget room available to us is systematically underestimated, it distorts the scope of public debate. Budget lowballing also creates a bias against public investment, which damages BC’s economic well-being in the long term.

Budget lowballing: a BC tradition

Consider 2018: on budget day, the government projected we would find ourselves with a year-end surplus of $669 million. But at the end of the fiscal year they booked a surplus of over $1.5 billion. In other words, the budget underestimated BC’s fiscal position by close to $1 billion (as we predicted). The previous provincial government repeatedly used the same inaccurate practice, underestimating fiscal resources available often by hundreds of millions or billions of dollars.

This faux-pessimism has been a remarkably consistent characteristic of the BC budget process over the past two decades. In 14 out of the past 17 years, the predicted budget position has been more pessimistic than the actual year-end. The only exceptions were in the wake of the global financial crisis in fiscal year 2009/10 and after the HST referendum when BC had to repay federal funds. 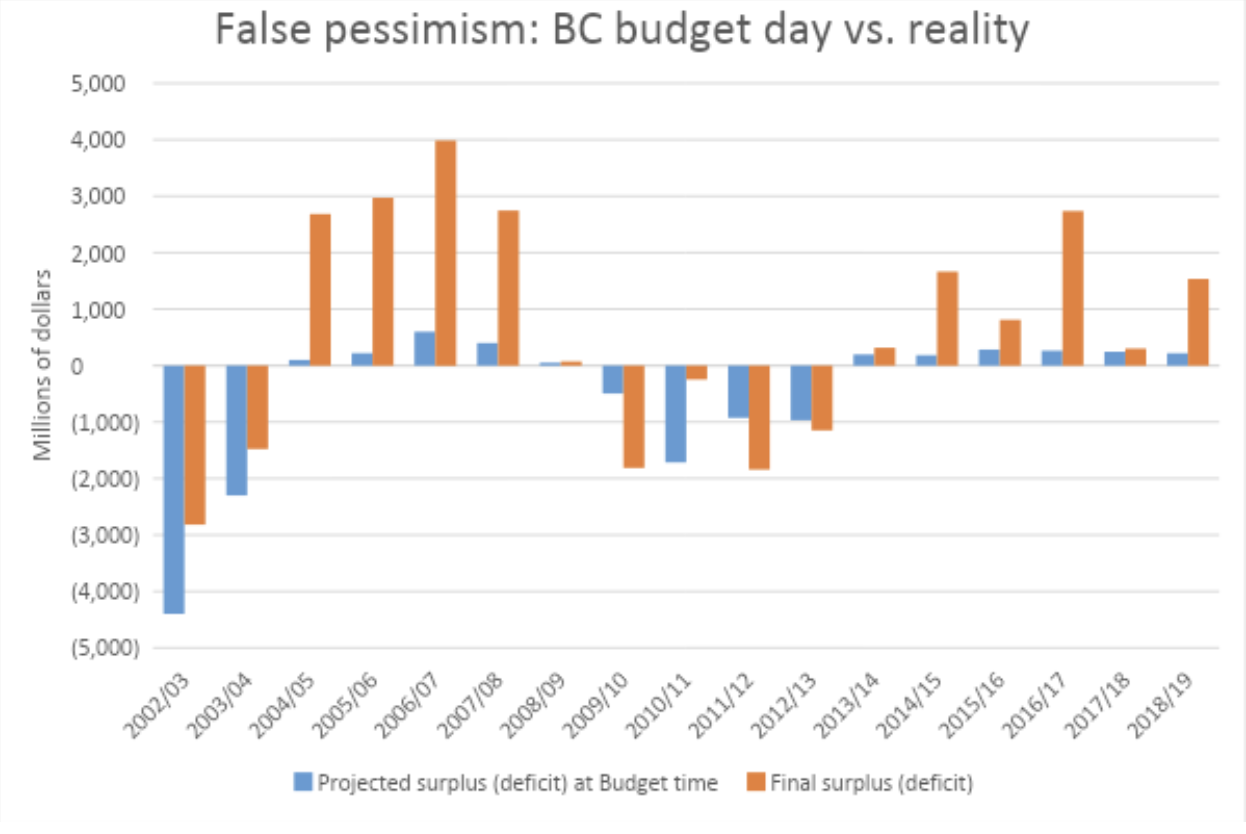 These consistent underestimates result from various forms of “fiscal padding” that are incorporated into the budget: forecast allowances, contingency funds, as well as the practice of assuming economic growth rates are lower than those projected by the Economic Forecast Council.

Naturally, unexpected events will arise over the course of a budget year, and revenues and expenditures will always fluctuate around the fiscal plan. But these fluctuations tend to cancel each other out within individual budget years—and certainly in the long-run.

For example, this year ICBC is likely to book a larger loss than predicted at budget time, but corporate tax revenues are coming in stronger than expected. Based on the Ministry of Finance’s most recent quarterly report, I would estimate we’re currently on track for another surplus of roughly $1 billion — while the official projected surplus is pegged at only $148 million.

Leaving money on the table comes at a cost

Why is this a problem? When budgets downplay our real fiscal position, ‘surprise’ year-end surpluses are allocated to pay down debt, rather than budgeted for additional investments in areas like housing, child care, public transit, climate action and poverty reduction.

But with interest rates at historic lows, $1 billion put towards critical public investments will almost certainly pay off better in economic terms than a reduction in debt. Indeed, a dollar of investment in areas such as public transit and child care pays off with far more than a dollar in added economic output. As the CCPA’s work has shown, poverty itself needlessly costs BC’s economy billions of dollars per year. When we prioritize low-return debt reduction over high-return public investment, we are essentially flushing money down the toilet.

So why has budgeting for ‘a surplus at all costs’ become the norm? For one thing, decades of ideology have pushed the idea of austerity and small government. Large deficits under high interest rates in the 1980s helped entrench an assumption—at least among political elites and pundits—that avoiding any deficit is important. But there’s no meaningful economic difference between a small surplus and a small deficit. Any serious macroeconomist will tell you this.

At the federal level, we finally seem to have gotten over the surplus fixation. Since 2015, Canada has run modest but sustainable federal deficits without increasing the debt-to-GDP ratio. The sky hasn’t fallen, the federal government’s credit rating hasn’t been downgraded, and most voters don’t seem to mind. Even the Globe and Mail’s editorial board chimed in recently to note that the BC government “has the room to be more ambitious while remaining fiscally prudent.”

What matters for BC’s fiscal health is not whether a year ends with a budget surplus, but the debt-to-GDP ratio (the debt relative to the annual income of the economy) and debt service costs (the debt interest payments relative to the size of the budget).

While very large and sustained deficits over many years could become problematic, small deficits (the kind that result from normal fluctuations in economic conditions) are nothing more than a rounding error. And when deficits fund productive, long-term investments that produce returns higher than the cost of borrowing, they improve our fiscal health.

A surplus at all costs, or long-term social and fiscal well-being?

Even notorious fiscal hawks like the international credit rating agencies agree there is room to raise additional revenue in BC. Moody’s Investors Service notes that “the current low tax environment offers British Columbia the flexibility to raise taxes… while still remaining competitive with other jurisdictions.” DBRS says pretty much the same in their most recent report.

BC is a low tax jurisdiction, and provincial public spending as a share of our overall economic pie (GDP) has declined substantially over the past two decades. The current provincial government has halted this trend, but not reversed it. Since they took office, corporations, top income earners, and owners of high-end real estate are paying a little more in tax. However, this added revenue has been offset by a massive $2.6 billion tax cut in the form of eliminating MSP premiums (a good move, since this was one of BC’s most unfair taxes). 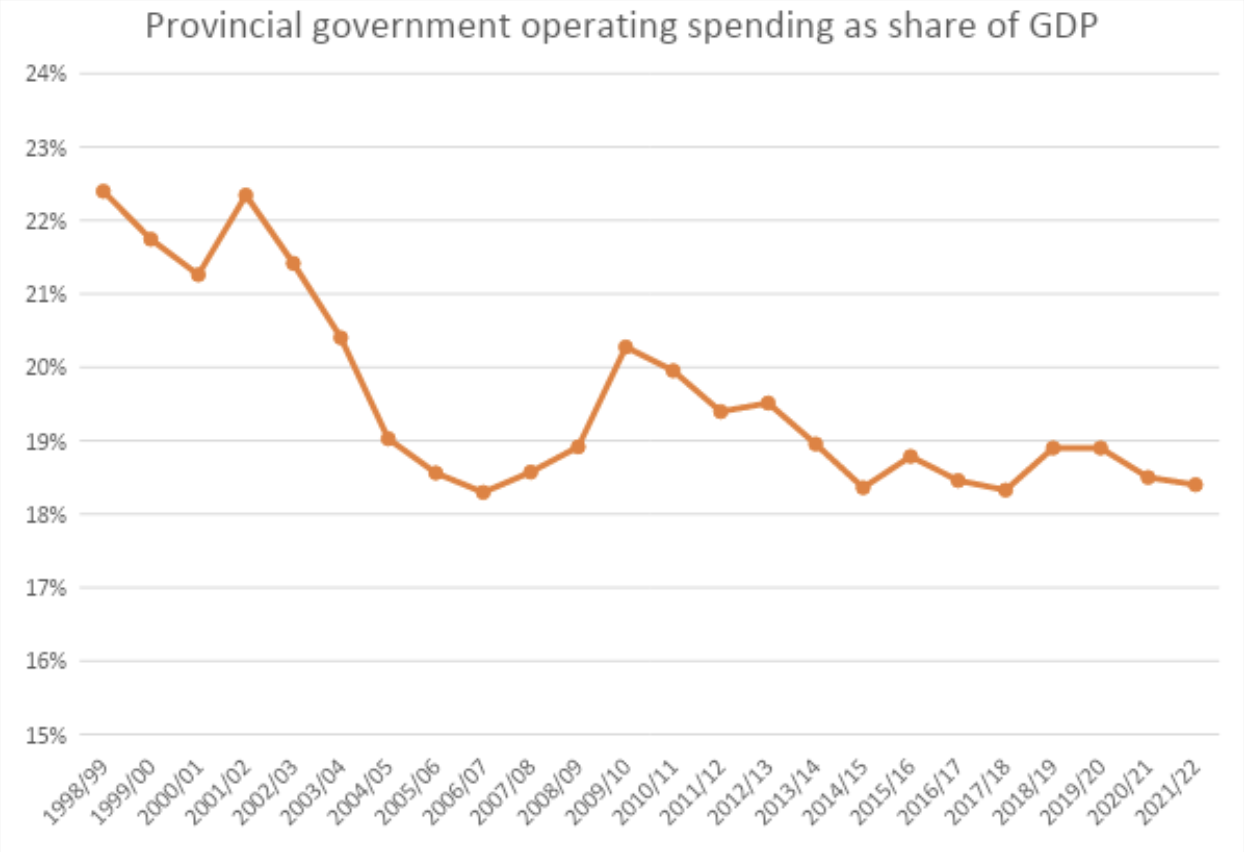 The reality is that if BC dedicated the same share of its GDP to public spending as we did in 2000, we’d have $7 billion more available this year to invest in social and environmental priorities. That’s enough to quadruple funding to the CleanBC climate plan, add 10,000 units of new affordable housing per year, raise welfare rates to 100% of the poverty line, fully implement $10-per-day childcare and eliminate tuition fees for domestic students—with room to spare.

But even in the absence of additional revenue, we should make full use of the fiscal room we have. As a province we need to ask ourselves: do we want a surplus at all costs? Or do we want to make the high-return public investments necessary to meet the big challenges we face?

How big is BC’s budget surplus?