As BC’s political parties lay out their election platforms, media pundits tend to focus on the flurry of spending promises. But all this attention on spending makes it easy to forget that we’ve actually witnessed an incredible shrinking of government’s role in BC over the past 15 years. Unlike the strange mist that shrinks Scott Carey in the 1957 sci-fi classic, The Incredible Shrinking Man, the cause of BC’s shrinking public sector is not so mysterious.

That’s a steep drop. In concrete terms, it means that if we dedicated the same share of BC’s nearly $270 billion economy to public spending today as we did in 2000, we’d be making additional investments of approximately $7 billion per year. 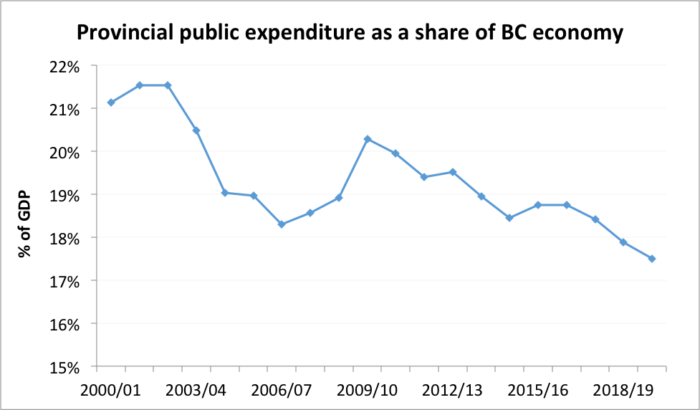 Some celebrate this shrinking act, but many British Columbians are all too aware of the consequences. We face a housing affordability crisis, uneven job growth that is concentrated in the Vancouver and Victoria regions, education and health systems stretched to their limits, damaging levels of poverty and inequality, and a deepening climate change emergency.

What do these challenges have in common? In order to solve them, we must act together on a societal level. They can’t be solved by individuals and families in the marketplace.

These challenges are not small, but tackling them is well within our grasp. We have the policy solutions at our fingertips. All we need are the political will and resources to be unleashed. As a province, we have the resources not just to alleviate our most urgent crises, but also to make substantial progress in a whole range of areas. Research by the CCPA on housing, child care, healthcare, seniors, poverty, taxes, forestry and climate change—points the way with specific, workable ideas.

Failing to make these investments is costing us enormously year after year. Our research shows that poverty costs the BC economy $8–9 billion annually—more than double the cost of a comprehensive poverty reduction plan.

Failing to make these investments is costing us enormously year after year.

Similarly, CCPA research demonstrates that a public, universal child care system would largely pay for itself. Affordable, quality child care makes it possible for women with young children to return to work, which generates new tax revenue and economic activity. Not to mention the relief it would provide to young families facing astronomical costs for both housing and child care. Child care fees in cities like Vancouver climb to almost $16,000 per year for an infant or toddler. Additionally, there’s a considerable job creation boost that comes from building out a major new public service.

Another example where public investment could benefit British Columbians is our largely privatized pharmaceutical drug costs, which are much more expensive than what public universal drug coverage would be. University of BC Professor Steve Morgan estimates that, under current arrangements, Canada will waste approximately $100 billion over the next decade compared to if we launched a universal pharmacare program now.

In other words, the shrinking role of government ironically means we often end up wasting more money on a societal level by failing to make crucial public investments.

How is it that BC is spending so much less of our economic pie today to tackle the gathering storm of challenges facing our province? Successive rounds of tax cuts are one key reason. The richest 1% of households now pockets an average $39,000 annually thanks to tax cuts brought in since 2000. Much of this doesn’t get spent in the local economy, instead going to imported luxury goods and holidays.

In contrast, households in the bottom 50% “gain” only $53 per year on average. Add to that large tax breaks to business over the same period, with the provincial corporate income tax rate dropping from 16.5% to 11%, and an additional $600 million in business tax breaks in Budget 2017.

There is growing recognition of the need—and genuine possibility—for a major reinvestment in the public good.

We need to break out of this pattern. There is growing recognition of the need—and genuine possibility—for a major reinvestment in the public good. Even deeply conservative institutions like the International Monetary Fund are highlighting that inequality damages economic growth, while mounting research shows how inequality tears at our social fabric.

And, there is also growing public awareness of the problems of relying on an unfettered, unregulated marketplace for all of our needs. We’ve seen this lesson unfold dramatically in global financial crises, the climate change emergency, housing unaffordability, and inexcusable levels of poverty and inequality.

We need to rebuild BC’s public sector, not shrink it. We can make our tax system fair by insisting that the rich and corporations pay their share, and by pooling our resources to meet the challenges we face. The alternative is to allow these problems to fester and watch our social fabric fray. A look south of the border tells us something about where that road leads.

The role of stimulus spending in the recovery