There reports released today show that the costs of supporting a family are rising fast in the three largest urban areas of our province, home to 2/3 of BC’s population. Two parents working full-time must each earn $20.10/hour in Metro Vancouver, $18.93/hour in Greater Victoria and $17.02/hour in the Fraser Valley.

The living wage reflects the actual costs of raising healthy children in our communities: local rent, child care fees, food and transportation costs. It provides for a basic level of economic security, but still represents a conservative, bare bones budget.

And when we look at the numbers, we find that the costs of the basics for families with kids is rising considerably faster than general inflation measured by the Consumer Price Index (CPI). This is true in all three communities calculating their living wage today.

The 2014 living wage numbers reveal a big gap between the low wages a number of British Columbians earn and the real costs of raising a family. Child poverty is a serious concern in our cities. 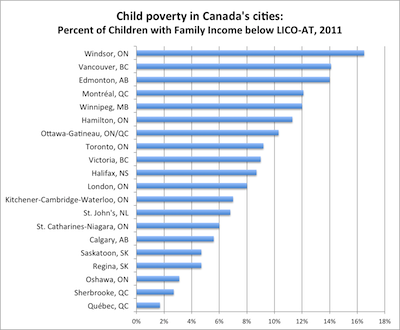 Vancouver’s child poverty rates remains the second-highest in Canada and has actually seen an increase from last year’s 13.8% to 14.1%. Note that this is not just the City of Vancouver, but the entire metropolitan area, including municipalities from Anmore to Langley and Maple Ridge (complete list here).

Victoria is in the middle of the pack, in 9th place, with child poverty rate of 9%. These numbers refer to the Greater Victoria area (see here).

Child poverty isn’t a question of jobs: 6 of the 18 cities with lower child poverty rates than Vancouver experienced higher rates of unemployment in 2011. This is why it’s so important to talk about low wages and encourage employers to pay a living wage.

Statistics Canada reports on child poverty rates in selected municipalities with a total population of at least 100,000 (known to statisticians as census metropolitan areas). The data are updated every summer and can be found in CANSIM table 202-0802.