One in five BC children lives in poverty. This is the sobering finding of the 2014 BC Child Poverty Report Card released on November 24th, the 25th anniversary of a unanimous all-party resolution in Canada’s House of Commons to end child poverty in Canada by the year 2000.

Child poverty is not just a big city problem. In fact, the highest child poverty rates in BC are on the north and central coast: 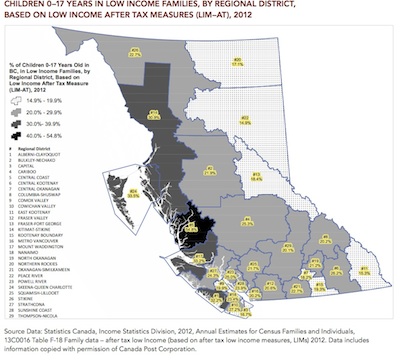 In Metro Vancouver, there are pockets of extremely high child poverty (30% or more) in the Downtown Eastside, Chinatown and Stratchona, but also in Surrey, Coquitlam, North Vancouver, Richmond, Burnaby, New Westminster and Langley (see all the maps here).

Yes, there has been some decline in child poverty since 2000 but progress has been too slow. With 169,420 children still living in poverty in our province, now is hardly the time for patting ourselves on the back. We must do better!

Behind these statistics are real children and families who suffer tremendous hardship and indignity. The Report Card features some of these heart-wrenching stories. More were shared at the press conference for the report’s release. Elementary school teacher Anna Chudnovsky brought the audience to tears with stories from the lives of her poor students (you can read about more of her students here). Single mother (and cofounder of the new Single Mothers’ Alliance of BC) Viveca Ellis talked about her own experience with poverty and being forced to go on welfare because she was unable to keep working at a $13/hour job when child care cost her $11/hour.

We must do better because poverty is more than just a personal crisis for the families living with low income, it’s a tremendous burden for society as a whole. We all pay for poverty.

Early childhood is when our brains are most sensitive to our environment, to our nutrition, to the kind of housing we live in and the stressors we are exposed to. Poverty in early childhood has detrimental consequences that persist when the children grow up. It’s linked to health problems, behavioural problems and worse school performance, which reduces these children’s future earnings potential.

Poverty stops too many children from reaching their full potential and we are all poorer for it. Not fully tapping into the creativity, talents and passions of one out of every five BC kids is a big loss to our communities and our economy.

It doesn’t have to be this way. The 2014 BC Child Poverty Report Card outlines areas for both immediate and medium term action in its Recommendations. The BC government must take the lead and develop a comprehensive poverty reduction plan with legislated targets and timelines to tackle the root causes of poverty.

There is broad support for such a plan, not just from concerned community groups, educators and health professionals who’ve joined the BC Poverty Reduction Coalition but also from the Legislature’s Committee on Finance and Government Services. Their 2015 Budget Consultation report recommends that the BC government:

Child poverty is not a problem that can be solved by soup kitchens, food banks and Christmas toy drives any more than a leaky roof can be fixed by mopping the drips off the floor. We need an overarching, systematic approach to addressing the root causes of poverty. A government-led, comprehensive poverty reduction plan with an accountability mechanism to ensure that anti-poverty initiatives are sustained, evaluated and modified as needed to be effective is the best tool for the job.

There’s no better time than now.

BC’s current fiscal position is solid, with surpluses projected annually in the near term, and a manageable debt load. Our debt-to-GDP ratio of 18.1 per cent this year, one of the lowest in the country. Interest rates are record low. Now is a perfect time for our government to consider borrowing to make the strategic public investments necessary to tackle child poverty. The only thing standing in the way is political will.

Child Poverty in BC — taking a look back