The housing crisis in BC is a multi-headed beast, requiring an all-hands-on-deck effort to make homes affordable and available to everyone as a human right.

Most of my work on housing policy to date has focused on financing a massive expansion of public and non-market housing, using progressive taxes to tamp down on speculation and tackling huge inequalities created by the explosion of land values.

But in this post I want to zero in on the question of overall housing supply with a particular focus on the huge backlog of need for rental housing. The truth is there is no way out of the housing crisis without a tremendous effort to end the chronic shortage of homes, which helps drive up rents and creates a steady churn of displacement and exclusion.

Below are five reasons why overall housing supply deserves our attention, even those of us who focus most of our efforts on expanding public and non-market housing.

1. A low vacancy rate—i.e., a scarcity of available homes—is terrible for renters and a dream for landlords.

The simplest way to see the importance of supply to housing affordability is to examine the relationship over time between vacancy rates and rents. Below is a set of graphs plotting vacancy rates along with rents over time across several Canadian cities, reproduced from an article by data analyst Jens von Bergmann 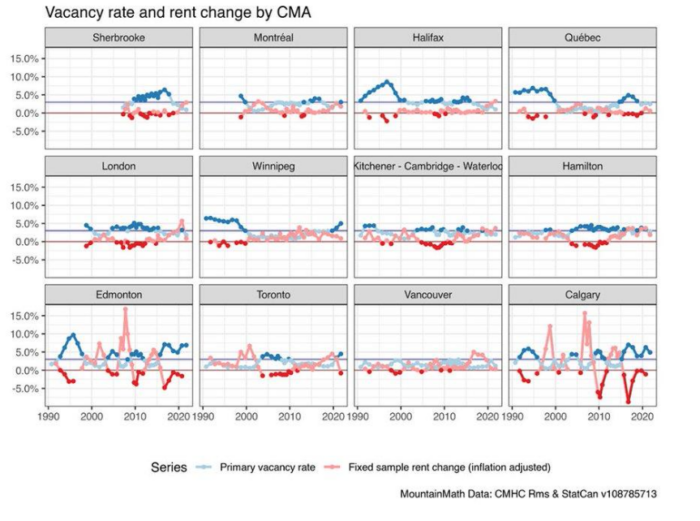 This should be no surprise, but it’s often overlooked or de-emphasized in housing policy debates. Vancouver hasn’t had a healthy vacancy rate in a very long time and it shows.

2. Large investors like REITs thrive on the housing shortage.

Large corporate landlords like real estate investment trusts (REITs) benefit enormously from the shortage of housing—and they know it.

REITs fear increased housing supply, high and healthy vacancy rates and the prospect of having to compete for tenants who have a range of housing options available to them. They have to disclose these “risks” in reports to shareholders and regulatory filings, which are quite striking to read.

For example, Killam Apartment REIT’s annual report highlights “increased supply risk”, noting that “an increase in alternative housing could have a material adverse effect on Killam’s ability to lease units, and the rents charged and could adversely affect Killam’s revenues.”

Luckily for their investors—though certainly not for renters—they note that “with population growth and demand out-pacing the housing supply in our core markets, Killam had a very successful year… optimizing rental rate growth.”

Canadian Apartment Properties REIT’s (CAPREIT) annual report notes the risk to investors of “competition for residents” and “competition from other landlords or the oversupply of rental accommodations.” Like other investors, they understand that “any increase in the supply of available rental in the markets in which CAPREIT operates could have an adverse effect.”

But they, too, are optimistic about their prospects, noting that “with increasing demand and little new supply of rental, we believe the value of our asset base will continue to increase.”

Minto REIT’s documents tell the same story: “Significant barriers to entry protect incumbent owners from increased competition and continue to contribute to the favourable supply/demand fundamentals.” This “supply-constrained market creates a compelling investment opportunity for investors.” These are all Canadian examples, but the same is true of big investors in the US.

One of the best studies on the effects of adding new rental housing comes from Finland, where detailed administrative data allow researchers to precisely trace the moving chains that result when a new building opens.

Consistent with a growing body of research, the study finds that as higher-income renters move into new buildings this “loosens the housing market in middle and low-income areas even in the short run… [and] is likely to improve affordability outside the submarkets where the new construction occurs and to benefit low-income people.”

Interestingly, the study finds that social housing produces these same benefits, but even more so. Plus the new social housing units are themselves immediately more affordable.

This makes you think: wouldn’t it be a good idea to flood the market with public and non-profit housing? Yes, and we should. We urgently need to massively increase public investment of this kind.

In fact, well-designed public investment in non-market housing can largely pay for itself through the stream of rental income it creates, a model that I laid out in a recent analysis.

We need all the new rental housing we can get to help ease the crisis.

After all, we want to help not only people who (by luck or whatever other process) get to live in new non-market homes as they are built, but also help the huge number of people who will be stuck fighting it out for private rentals for years to come.

That means paying close attention to overall supply. If a plan to add new non-market housing isn’t big enough to drive down rents for those who are stuck in market rate units, it’s either too small or it needs to welcome new market housing as a complement.

The largest proposal I have seen for a big build out of dedicated non-market housing in BC is 20,000 homes per year (and that was by me here on Policy Note). If implemented, that would be a massive increase in ambition and a number far above any historical period in this province. But it would still be nowhere near meeting the overall need for new homes in British Columbia.

A recent report by the Canadian Mortgage and Housing Corporation offers one estimate of the supply gap in Canada and BC. The report finds that to return to the affordability levels of the early 2000s, BC needs to add 570,000 homes above current projected builds by 2030.

As Marc Lee has pointed out, in Metro Vancouver “the amount of housing built as a share of population in recent years is low relative to the entire post-World War 2 period.” Once you factor in demolitions and the fact that new housing units tend to be smaller, the amount of net new livable housing space built in recent years is even lower by comparison.

We have a lot of work to do to address the massive backlog of need for housing.

5. Renters’ rights won’t be secure until we end the housing shortage.

The force of stronger tenants’ rights and rent controls—which are needed and important—is weakened when there’s a housing shortage. Even strong legal rights are often unenforceable when renters don’t have a good “outside option”—i.e., anywhere else to go—and landlords know it. To secure renters’ rights, there needs to be enough housing supply so there are plenty of openings when individuals or families need or want to move.

To illustrate this, let me give an example from personal experience. A few years ago, I received what amounted to an illegal eviction notice when the house I had rented a suite in for many years was sold. This was supposedly “for owners’ use” of my attic-level unit. In fact, the new owners had no intention of occupying my unit, though they did plan to move into the main unit of the house.

To make a long story short, after contacting the new owners, I ended up “agreeing” to an illegally high rent hike—far above the legally allowable increase—so I could stay in my home.

I knew my rights and could have dug in for a big fight, but that likely would have meant finding a new home (until I could demonstrate that the new owners were not occupying my unit after they took possession) and then moving back. It also would have meant living upstairs from a landlord—neighbours I would see every day—with whom I would have just gone to battle.

I didn’t want to live in that kind of situation (any more than I wanted to live in someone’s sweltering attic for a decade in the first place), but I bit the bullet and made peace by “accepting” the illegal rent hike because this was better than any other option available to me.

The problem here was structural, not personal. They were a nice young family and we got along well. But the power imbalance driven by the housing shortage shaped the entire scenario.

Housing for all: achievable, affordable and urgent

One quirk of the debate over housing supply is that when it comes to cracking down on empty homes or short-term rentals like Airbnb—with the aim of shifting these homes to long-term rentals—the benefits of adding market housing seem to be obvious to everyone. But when it comes to building new rental housing, this understanding seems to break down.

Building as much housing as possible used to be common sense on the left and that common sense may be returning. An emblematic postwar poster from the UK Labour party had the caption: “Let’s build the houses – quick!” The most left-leaning major party leadership in the anglosphere in recent years—the Labour party under Jeremy Corbyn—›held this view. In their policy research, they viewed building as much housing as possible overall as a crucial social good, with government helping to lead the way with a massive increase in public investment. 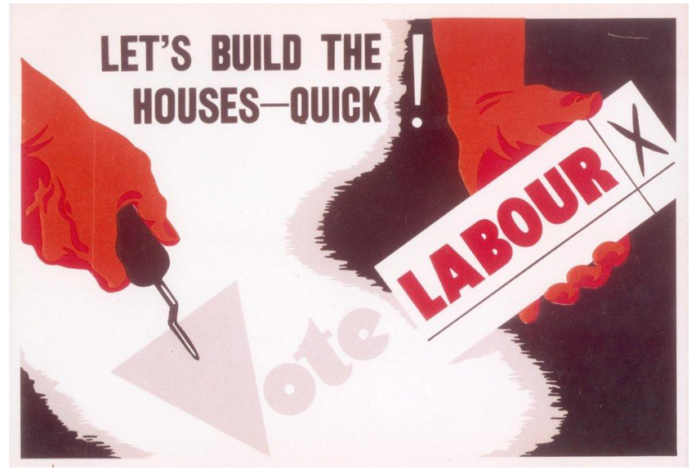 When it comes to adding badly needed new housing, it also matters where it’s built. Currently, about three quarters of residential land in cities like Vancouver is zoned exclusively for the most-expensive form of market housing: detached houses. This drives up the cost of land on the scarce parcels where multi-family housing like apartments is allowed to be built. It also causes the displacement of renters by steering new housing development towards existing apartment sites (which are themselves too often confined to noisy and polluted arterial roads) instead of building new homes on the least-used land with the lowest density.

Exclusionary zoning of this kind imposes deeply unequal access to our cities, as well as inflicting major damage on the climate. Building more homes on a large scale needs to be coupled with ending exclusionary zoning (check out Marc Lee’s work on how to do this). US progressives like Alexandria Ocasio-Cortez and Bernie Sanders have also taken on this fight south of the border.

Tackling a deep and long-standing housing crisis demands an all-of-the-above approach. That means a massive increase in the supply of housing across the board with as much public, non-profit, co-op and rental housing as possible. It also means strengthening tenants’ rights, taxing land wealth and building renter power through organizing. We need all of this and more.

This post is a part of an ongoing research project into affordable housing funded by the Vancouver Foundation.

BC’s housing crisis during the pandemic: A snapshot