What happened to the 114,000 new affordable homes promised in BC?

During the 2017 election campaign as part of its plan to make life more affordable, the BC NDP promised if elected to “build 114,000 affordable rental, non-profit, co-op and owner-purchase housing units through partnerships over ten years. These homes will be a mix of housing for students, singles, seniors and families and will range from supported social housing to quality, market rental housing.”

The 114,000 target remains rhetorically central to the BC government’s subsequent 2018 Homes for BC 30-point plan, which included planned investments in new housing, tax measures aimed at high-end properties and non-residents, enhanced renter protections and other regulatory changes aimed at the real estate market. However, there has been little follow-up in subsequent budgets.

This post breaks down progress on the 114,000 target, for which there is a glaring lack of detail provided by BC Housing (the Crown corporation that runs most of the provincial housing agenda) and the BC government (currently the Ministry of the Attorney-General and Housing). Much of the data in this post are sourced from internal briefing materials to ministers and include actions up to April 2021. A separate post looks at the impacts and revenues from the 2018 tax changes.

Four years after the release of Homes for BC, it’s hard to see much progress on housing affordability in BC. Indeed, recent price escalation has made the situation as bad as ever. There is much more work to be done to expand the stock of non-market rental housing, in particular. The BC government must play a much larger role in direct public investment in housing, including housing development, turning over public land to non-profits for development and providing low-interest financing for non-market projects. Both the terms ‘social housing’ and ‘affordable housing’ have been subjected to differing definitions, but for our purposes we are interested in new rental housing that is between 50-80% of median rents.

The Homes for BC plan was delivered in the 2018 Budget and promised $6.2 billion (capital and operating funding) over 10 years, but for a lower 33,700 units not for the 114,000 units. These units were broken down as: affordable rental stock (14,350 new units, 4,900 existing), student housing (5,000 beds), modular and affordable rental housing for people experiencing homelessness and the most vulnerable (3,700 units announced in a September 2017 budget update), supportive housing (2,500 units), transitional housing for women and children (1,500 units) and housing for Indigenous people (1,750 units). The 2019 and 2020 budgets added funding for a Homelessness Action Plan consisting of 400 new units of supportive modular housing.

Four years after the release of Homes for BC, it’s hard to see much progress on housing affordability in BC.

Table 1 compiles data from BC budgets and other briefing materials provided to the Ministers of Finance and Housing, as of April 30, 2021. There is a big gap between the headline numbers announced in the 2018 budget, which are intentions over 10 years, versus the actual budget allocations made in the initial three-year fiscal plan ($6.2 billion vs $1.9 billion respectively). The table also distinguishes between grants provided for housing investment versus low-interest loans.

The total number of completed units has been very small, with the vast bulk of completions reflecting investments in modular and supportive housing for people experiencing homelessness or other deep vulnerabilities (3,156 units out of 3,625 total completions). 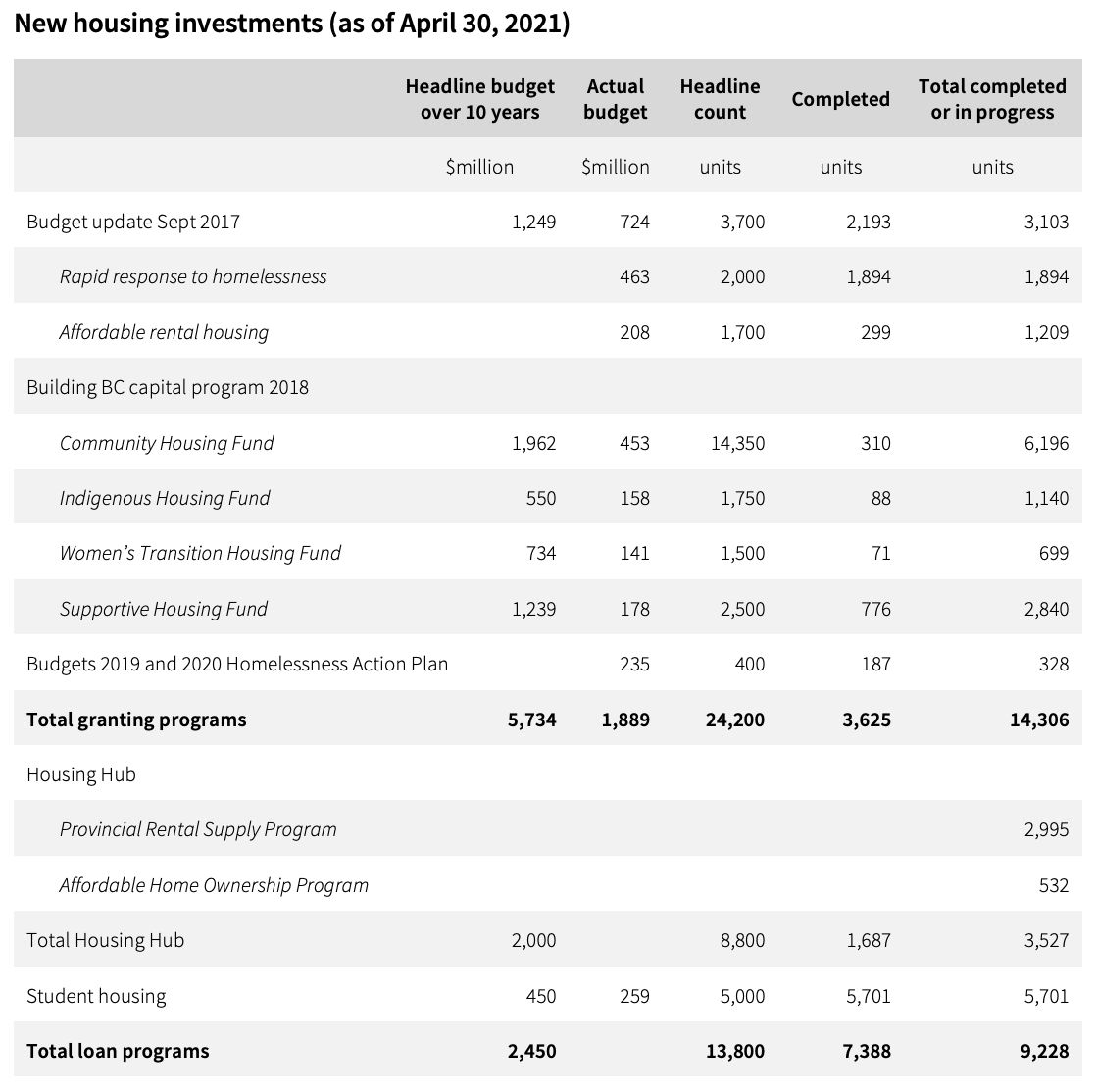 Notes: Budget 2018 also includes 4,900 units under Deepening Affordability of Existing Projects, which are not included in this table. Headline budget includes operating and capital contributions for granting programs, and loans for loan programs.

Source: Ministry of Attorney General and Minister responsible for Housing, Estimates Notes 2021, Notes B1.1, B1.2, B5.2

The Community Housing Fund, which most resembles historical social housing, had only completed 310 units. Although more units are on the way, including almost 2,000 units under construction, some 3,400 units are merely listed as “initiated”. We should recognize that it takes time for housing projects to get off the ground and to completion, especially amid the backdrop of the COVID-19 pandemic.

In place of more direct investment in affordable rental housing for ordinary households, the BC government is stepping in with low-interest loans. A major piece is the Housing Hub program, which “develops, facilitates, and supports partnerships across the housing sector to create market-based and affordable housing for middle-income households without the need for ongoing subsidies.” An increased ceiling of $2 billion for low-interest loans was allocated to Housing Hub in the 2021 budget.

Housing Hub has completed 1,687 units, with another 1,840 units in various stages of construction or development. These units are mostly for the Provincial Rental Supply program (2,995 units combined) and a lesser amount for an Affordable Home Ownership program (532 units).

The Community Housing Fund, which most resembles historical social housing, had only completed 310 units.

Low-interest loans have also been provided to universities developing new student “beds”. The 5,700 beds/units of student housing represents almost half of the total completions (combined grant and loan programs).

Not shown in the table is additional funding commingled with COVID response spending for homelessness, including the lease of spaces in hotels, motels and community centres as temporary shelters. The BC government also purchased nine hotels in Vancouver and Victoria at a cost of $221 million to house people experiencing homelessness and living in encampments. The 2022 BC budget committed ongoing support for some 3,000 people in shelters and other temporary spaces during COVID-19.

The BC government has primarily stepped up with new housing investments aimed at people experiencing homelessness and other vulnerabilities. While there is some more traditional social housing in the pipeline, it is a relatively small amount and projects have been very slow to get to completion.

Overall, the BC government’s performance is still far too modest to make a real dent in housing affordability. Housing assets can pay for themselves over time through the rents received so there’s no reason for the government not to build.

Instead, provision of low-interest loans, rather than grants, for student housing and other housing partnerships has become a more central focus of the government’s housing agenda. Low-interest loans can play a supportive role but are not the same as direct expenditures.

Towards the 114,000 target, over 14,300 units are complete or in some stage of development under the various granting programs while another 9,200 are from loan programs. Total completed units from both streams amount to about 11,000 units. Thus, less than 10% of the 114,000 unit target has been completed as of April 2021, rising to 22% if we count units in progress. A large share is merely “initiated” rather than under construction and all categories should show progress almost a year later.

A renewed effort is needed in subsequent budgets to put the Homes for BC plan back on target. With (unnecessarily) limited funds, there is a case to be made that the priority should be on those in the most dire circumstances. However, the BC government has substantial fiscal capacity to scale up its efforts by acquiring public land and making it available for non-market development or by making direct upfront investments in dedicated affordable housing. Given the crisis of affordable housing, we urge the BC government to take on more of the heavy lifting.

This post is supported by a grant from the Vancouver Foundation.

What happened to the National Housing Strategy?