What happened to the National Housing Strategy?

Launched in 2017, the National Housing Strategy (NHS) was billed as a major re-engagement by the federal government on affordable housing after more than two decades on the sidelines. Starting with a headline commitment of $40 billion when first announced and supplemented in subsequent budgets, the NHS is now ostensibly valued at more than $75 billion over ten years.

This post takes stock of the NHS to date, in terms of the overall federal spending effort on housing and the amount and nature of housing supported by the NHS. The headline commitment of $75 billion, in particular, substantially exaggerates actual federal expenditures on affordable housing. Where the NHS has played a role is in continuing support for existing social housing and, more recently, injecting funds to address homelessness.

When it comes to new affordable housing, however, the bottom line is that the NHS has delivered relatively little of what Canadians might consider to be affordable housing or social housing, in particular dedicated non-market and co-op rental housing. Market housing in Canada constitutes about 95% of the housing stock, and the NHS does not make any serious inroads into challenging that situation. If anything, the NHS is supporting the ongoing financialization of Canada’s housing stock by emphasizing low-interest loans to private developers building market rental housing.

The big picture on federal expenditures

A 2021 review of the NHS by the Parliamentary Budget Officer (PBO) showed $37 billion in actual and planned federal budgetary expenditures over 10 years starting in 2018/19, compared to $75 billion in headline commitments. And $12 billion of the actual/planned total represents pre-existing commitments made prior to the NHS. Thus, only one-third ($25 billion) of the claimed $75 billion headline number represents new federal spending.

If anything, the NHS is supporting the ongoing financialization of Canada’s housing stock.

The remainder is primarily loans, which are different from federal budget expenditures as they need to be repaid. Counting loans on an equal basis with grants and contributions for building new public or non-market housing is mixing apples and oranges. Loans are different in cost to government compared to grants, as the former must be repaid, and they have a much smaller budgetary cost.1

To get a better sense of federal effort we can look at planned and actual housing expenditures under the NHS and before. Figure 1 reproduces the PBO’s estimates in nominal terms then adjusts for inflation using the consumer price index.2 The addition of 2017 NHS planned spending (in grey) leads to a modest increase in federal expenditures relative to early 2010s levels. A notable bump in expenditures from the 2020 Economic and Fiscal Update (green) and the 2021 Budget (dark blue) primarily reflects the Rapid Housing Initiative (RHI), aimed at the acquisition of social and supportive housing, including the purchases of hotels for conversion. 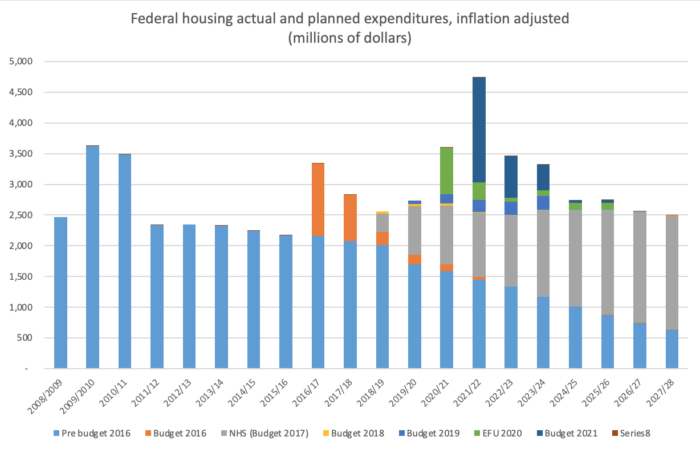 Figure 2 looks at the federal effort over time relative to the size of the economy. The overall federal effort is relatively small, ranging from 0.1 to 0.2% of GDP. Apart from a boost from the RHI in the 2021/22 fiscal year, projected expenditures are forecast to be similar to expenditures going back to 2008 and are declining as a share of GDP going forward.

Much larger infusions of funding will be needed in the 2022 and subsequent budgets if the federal government is to live up to the rhetoric of the NHS. The federal government certainly has the fiscal capacity to engage in broad-based development of non-market housing that would actually have a meaningful impact on housing affordability. The good news is that upfront capital costs of building housing would be repaid over time in rents. However, the commitment to a big bang rollout of dedicated non-market housing has been missing. 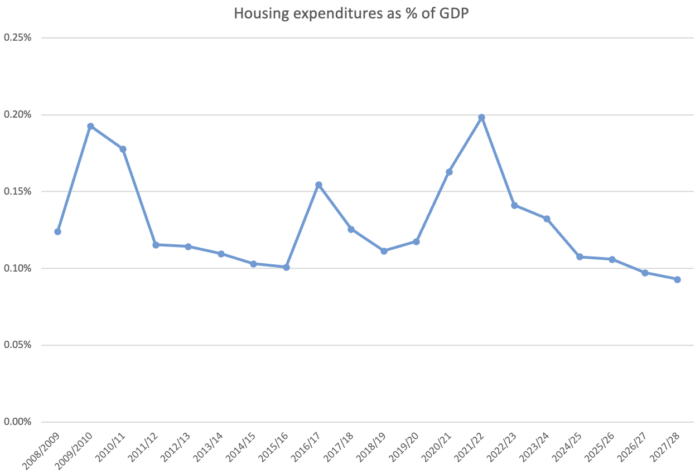 Source: Housing data from PBO and federal budgets as per Figure 1. GDP data from Statistics Canada up to 2000 and beyond from federal Economic and Fiscal Update 2021.

As headline numbers can span up to a decade, we need to see what projects and number of units have been approved, what’s under development and construction, and, finally, what has been completed. Beyond the numbers of units, we are also interested in the mix of loans versus grants, whether funding is going to non-profits versus for-profit developers, and how much is new construction versus repairs or renovations of existing units.

The commitment to a big bang rollout of dedicated non-market housing has been missing.

The main funding buckets of the NHS are:

The NHS publishes a spreadsheet of announced projects. Between August 2017 and September 30, 2021, the NHS had announced projects totalling almost $6 billion, supporting over 55,000 new units. These are broken down in Table 1. 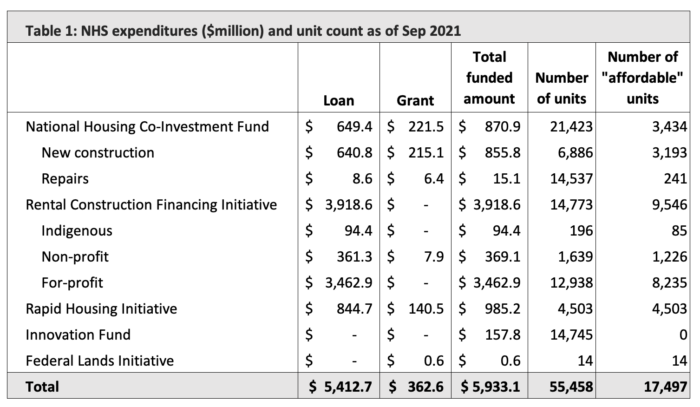 For the National Housing Co-Investment Fund (NHCF), most of the units funded are repairs and renewals as opposed to new construction, with the vast bulk of these from the Toronto Community Housing Corporation.

Three quarters (75%) of NHCF funding is in the form of loans not grants. All of the Rental Construction Financing Initiative (RCFI) is loans, and 88% of RCFI loans (and 75% of projects) went to for-profit developers, compared to 9.2% to non-profits and 2.4% to Indigenous projects.

Only $363 million from the NHS represented new federal investment (grants and contributions) in the construction of new dedicated affordable housing, up to Sept 2021. And 39% of this is the Rapid Housing Initiative (RHI), which was only announced in Fall 2020 and was not part of the original NHS. This is a far cry from the rhetoric of the NHS and the $75 billion headline number.

The RCFI has also been criticized for making it hard for non-profit developers to access loans due to requirements for upfront capital. For-profit developers, perversely, have been better able to access loans for projects that end up building more expensive rental housing. Additional NHS data released upon request to NDP housing critic Jenny Kwan show that the RCFI for-profit projects yielded much higher average rents.

The same data also show that as of August 2020 average processing times were just over a year for the RCFI and 1.5 years for NHCF before getting a project approved. Of course, it will take even more time for permitting and construction before anyone can move in.

One striking gap in the publicly available data is the number of units that have actually been completed. Getting housing built takes some time and has likely experienced added complexity due to COVID. Nor is it clear how much of the unit count in Table 1 reflect finalized agreements versus letters of intent or other projects at a pre-approval stage. The data released to the NDP showed that of 12,180 units listed as new construction, only 2,776 had reached finalized agreements as of August 2020.

Is the NHS delivering on affordability?

The term affordability is used frequently but has different meanings so it’s worth considering how much of newly constructed housing will be genuinely affordable. By its own accounting, as seen in Table 1, some 32% of units are counted as affordable (including repairs and new construction). However, even this may overstate the amount of affordable housing due to different definitions.

The RCFI has different affordability criteria, requiring that 20% of units meet a benchmark of rent at less than 30% of median family income (as determined for each city), as opposed to median market rent. The PBO states “30% of median total income for all families in the area is generally higher than the rent for new private market rental developments.”3 In Vancouver, this calculation would mean that 20% of the units would be available at $2,063 per month, while the remaining units would rent for more.

The RCFI is arguably clearly a program for the middle class rather than those most in need of affordable housing.

The RCFI is arguably clearly a program for the middle class rather than those most in need of affordable housing. It was conceived of as a response to the low level of rental housing construction in the previous few decades, although developers were already getting back into building new rental housing due to low vacancy rates and higher rents. As housing analyst Steve Pomeroy notes, the lowest rents under the RCFI would still be far in excess of what most renter households can afford.

In addition to new construction, there are other key initiatives in the NHS that represent ongoing funding supports. These are important but do not get the attention that is reserved for new housing projects.

Not counted in these amounts but worth mentioning is a tax expenditure that benefits homeowners, the non-taxation of capital gains associated with principal residences. The Department of Finance estimates the foregone revenue associated with this tax treatment to be worth $7.8 billion in 2022, about double the annual expenditures on housing in recent years discussed above.

Outside of principal residences, all other capital gains associated with real estate also benefit from having only half of any realized gains counted as income for tax purposes. Together these are tantamount to subsidies to real estate investment and form part of the explanation for skyrocketing housing prices in recent years.

The NHS has been more successful at delivering big headline numbers than in producing actual housing. While the NHS rhetorically speaks to making housing a human right, there has yet to be a meaningful fiscal commitment to make it so. At best, we can say that the NHS maintains previous federal effort on housing supports, has spurred some new market rental housing, and is slowly rolling out a modest amount of new social housing.

While the NHS rhetorically speaks to making housing a human right, there has yet to be a meaningful fiscal commitment to make it so.

The NHS cannot live up to its own hype as long as it emphasizes loans for private rental development rather than much-needed large investments in non-market housing. Indeed, the NHS maintains the same federal government policy over the last three decades of not meaningfully engaging in developing non-market or social housing supply. More funding like the RHI should be made available: grants aimed at quick actions that reduce housing need and homelessness, reversing financialization by creating more non-market housing.

While the ramp up period for the NHS has been very slow, now is the time for funds to flow so that real projects can get off the ground. Significantly more fiscal effort–grants aimed at reducing financialization and reliance on markets for housing–will be needed in subsequent budgets for the NHS to live up to its promise of making housing a human right.

This research is supported by a grant from the Vancouver Foundation. The author would like to thank Shannon Daub, Nick Falvo, Alex Hemingway, David Hulchanski, Steve Pomeroy and Greg Suttor for their comments on an earlier version of this post.

1.  The Parliamentary Budget Officer (PBO) 2019 report comments, “Contributions and loans are fundamentally different in their cost to government and ability to influence behaviour. Because loans must be repaid, they provide less of a financial incentive than a direct contribution of the same face value. The budgetary costs associated with loan programs arises from provisions for credit risks or insurance, interest timing mismatch and operating costs. For example, the budgetary cost of the $3.75 billion in loans available under the Rental Construction Financing Initiative (prior to Budget 2019) is only $0.3 billion.”

2. Original tables from CMHC provided to the PBO, received via David Hulchanski access to information request. The PBO published report strangely did not adjust for inflation so this has been corrected.

Housing budget? Not so much.

Small steps on affordable housing: A look at the new federal and Vancouver plans