Not long ago, BC received huge annual royalty revenues from its growing natural gas sector. The revenues were often billed as paying for essential public services like health care and education, and were appealing politically as they meant governments did not have to raise taxes to do so.

The provincial government claimed that new production to supply a Liquified Natural Gas (LNG) export industry would raise a further $100 billion, called a Prosperity Fund, and would pay for increased services, tax cuts and/or reductions in the public debt. The “Debt Free BC” wrap on the BC Liberals’ 2013 election tour bus was predicated on these future royalties for BC gas.

BC gas production has increased substantially in recent years. Public revenues, on the other hand, have fallen substantially.

Those days are gone. And even worse, BC has more recently been giving away gas worth billions without a fair return to the public treasury.

Royalties differ from, say, corporate income taxes in that they reflect a return to the public purse when private development takes place. In theory, the royalty regime is supposed to capture a fair share of the “economic rent” (or excess profits) from exploitation of resources that are owned by public. This is particularly important for non-renewable resources like gas because once exploited that’s it.

BC gas production has increased substantially in recent years (top green line, right axis), up about 60 per cent in 2016 compared to a decade earlier. Public revenues, on the other hand, have fallen significantly. In the mid-2000s, when gas prices were much higher, BC saw peak royalty revenues of more than $1 billion per year (blue bars) with 2005/2006 a record year with nearly $2 billion in royalties. In recent years, however, royalty revenues fell to a fraction of these amounts. 2015/2016 shows a record low of $139 million.

In addition to royalties paid on gas production, companies bid at auction for the rights to explore and drill on public land, known as leases of Crown land tenure. These revenues hit a record $2.4 billion in 2008/2009 (red bars) and have now almost completely dried up: $16 million in 2015/2016 and a projected $15 million in 2016/2017. As a matter of budget accounting, land tenure revenues are now spread out over nine years following a recommendation from the BC Auditor General. This means the 2016/2017 BC budget is still getting a lift to its bottom line from that record 2008/2009 year, but starting in 2017/2018 the budget will be booking lower revenues from this source. 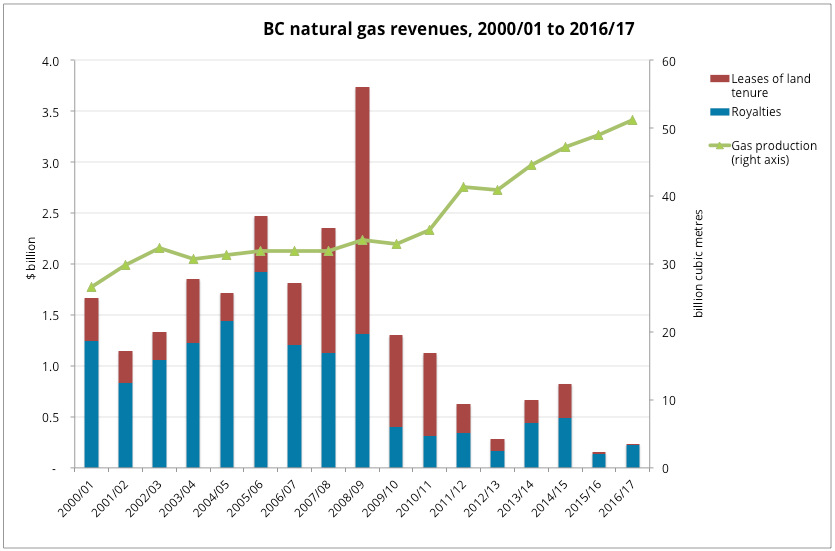 Another way of looking at whether the public is getting a fair share is the effective royalty, the share of the total dollar value extracted that is returned to the public treasury. From 2000/2001 to 2005/2006, on average 21 cents of every dollar of gas produced came back to the public sector in royalties. Since 2010/11, however, the effective royalty has averaged less than seven cents per dollar of gas sold, and in 2015/16 fell to a low of only four cents.

Why the drop? Royalties are calculated based on a formula that includes production volume, market price and other factors such as the productivity of the well. Low market prices in recent years have been a critical factor behind lower royalty revenues. From a peak of $8-9 per thousand cubic feet in 2008, gas dropped in price to $2 in 2015 and 2016.

BC’s royalty regime simply won’t provide a fair return to the public owners of gas resources. So forget about that Prosperity Fund from a future LNG industry.

Additionally, royalty credits, averaging $244 million per year over the past decade have also decreased, eroding revenues. These credits for “deep drilling” (i.e. fracking) and “road and pipeline infrastructure” are one of the ways the oil and gas industry is subsidized by the public sector (in addition, low industrial electricity rates through BC Hydro and super-low industrial usage charges for water could be considered subsidies to the industry).

Looking back, the BC budget benefitted enormously from gas revenues in the 2000s, underwriting record budget surpluses that were passed off as good fiscal and economic management. Since 2000/2001, total revenues from land tenures have been $9.4 billion plus $13.7 billion in royalties. That gold rush is clearly over with the North American market flooded with cheap fracked gas.

BC introduced its LNG strategy as an attempt to get that cheap gas to Asia where it would fetch a premium. That strategy now lies in ruins. Over the past four years, prices have fallen in Asia below the break-even point for potential exporters. But even if LNG projects in BC can overcome the abysmal economics of low commodity prices in Asia and high costs for getting gas there, BC’s royalty regime simply won’t provide a fair return to the public owners of those gas resources. So forget about that Prosperity Fund from a future LNG industry.

Looking forward, a rethink of this regime is in order because it encourages rapid depletion of gas supplies and is subsidized by low returns to the public sector. For climate reasons (if BC and Canada are to meet their international obligations to reduce carbon emissions) most of our reserves will need to stay in the ground. Managing BC’s gas regime for the longterm could, for example, shift to royalties that are based less on market price and more on quantity extracted so that an appropriate minimum “rent” and carbon price is paid. With a finite resource, royalties should also be used to make new public investments that green our infrastructure and support worker transitions.

Future generations depend on it.

BC is giving away its natural gas