The abysmal economics of LNG

In the lead up to the last provincial election, British Columbians learned about an economic panacea named LNG – Liquefied Natural Gas. This new industrial sector would take vast amounts of fracked gas pipelined from Northeast BC, and convert it to liquid form for shipment to Asia, where high prices would justify multi-billion dollar investments. BC, it was alleged, would benefit from a staggering $100 billion in additional revenues to the public sector, and 100,000 jobs. The CCPA has been critical of these bloated claims, while raising concerns about the impacts such mega-projects would have on energy security, carbon emissions and key environmental areas like water (see this summary of LNG whoppers).

But it is not climate nor is it environmental issues that are hampering the birth of an LNG industry; rather, it is the global marketplace. In part this reflects the massive drop in oil prices since the second half of 2014, which has continued into this year, and is likely to persist for the foreseeable future. Because LNG prices are often contractually linked to the price of oil, price falls get passed on to LNG. It is also about the specific supply and demand dynamics of the global trade in LNG: a lot of new supply coming onto the market but a weakening of demand.

You don’t need a degree in economics to conclude that surging supply amid weak demand will lead to lower prices.

A look at the International Gas Union’s 2016 World LNG Report is instructive. On the demand side, the heyday of high prices in Asia came largely in the aftermath of the Fukushima nuclear disaster, which led the Japanese government to take its nuclear capacity offline. A nuclear scandal in South Korea involving faked safety documentation also led to reactors being shut down. In both cases, this capacity is being restored, and in 2015 LNG imports fell by 3.5% in Japan and 12.2% in Korea. Importantly, the two countries represent almost half of global LNG imports. China is a small but growing player in LNG (about 8% of global imports), but saw no import growth in 2015, due to its economic slowdown. China also has other, cheaper options like pipelined gas from Russia, so it is not clear that future Chinese economic growth will be sufficient to drive up global demand for new LNG supply.

On the supply side, major new liquefaction capacity has come on-line from the United States and Australia, with much more to come between now and 2020. According to the IGU, new LNG plants already under construction will add 142 million tonnes to global supply. That’s equivalent to almost half of the existing world LNG market (301.5 million tonnes in 2015). In spite of current low prices, oil and gas companies in BC and elsewhere have kept production levels high rather than lose market share, and in order to get any cash flow they can after having sunk billions upfront into projects.

You don’t need a degree in economics to conclude that surging supply amid weak demand will lead to lower prices – and these conditions could persist for some time. The IGU report shows how much prices have come down relative to the heady days of 2012/13 when the BC government began its wishful thinking about LNG riches: 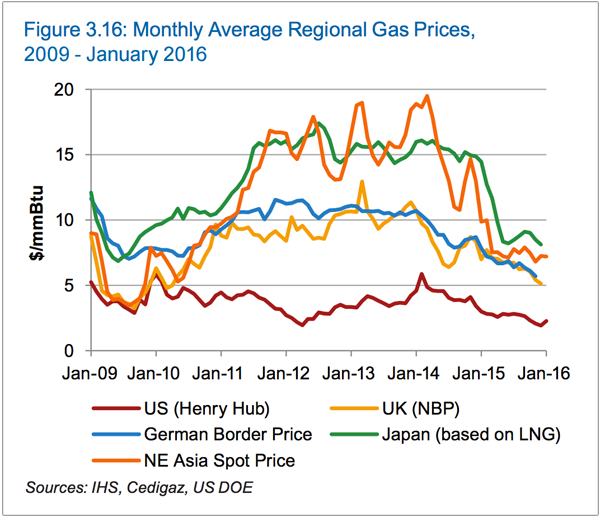 Note that by 2015 prices fell below $10 in all key regional markets. This is a significant threshold as the full cost of getting LNG to Asia (including extraction, processing, pipeline, liquefaction, shipping and re-gasification) is estimated to be about $10. If BC exporters could get that price, they would break even and perhaps turn a small profit. For the BC government to generate substantial additional revenues by taxing LNG profits, prices would need to be much higher. Yet, by May 2016, the price of LNG in Asia dropped even further than the figure above shows – to $4.24, as reported in the Wall Street Journal.

In this tough economic environment, major oil and gas companies have been under pressure to reduce their capital spending. The IGU adds that BC’s prospects have been hurt by an inability to secure buyers and high costs relative to the alternatives:

Arguably, the BC government has pulled out all the stops to lower the cost of capital for potential LNG investors. Yet, the IGU also finds that the BC government’s attempts to provide certainty on taxes and regulatory requirements are “unlikely to have a major impact on the overall pace of project development.”

Even those LNG projects that have major buyers as equity partners have been reluctant to say yes to expensive, multi-decade LNG mega-projects. This includes the LNG Canada consortium, led by Shell, which includes buyers PetroChina, Kogas and Mitsubishi as partners. In July, LNG Canada announced it was postponing a final investment decision on its proposed terminal in Kitimat.

Further up the coast, an LNG venture with similar characteristics, proposed for Alaska, was also shelved. This project featured carbon majors BP, ExxonMobil and ConocoPhillips, but proponents decided in August not to proceed to the design and engineering phase. A report commissioned by the proponents found:

Currently the competitiveness of the Alaska LNG project ranks poorly when compared to competing LNG projects that could supply North Asia, specifically Japan, South Korea, China and Taiwan. … [N]ot only will the project not make sufficient returns for investors at current LNG [liquefied natural gas] market prices, but it may struggle to make acceptable returns even under a US$70/bbl [oil] price.

Another massive BC proposal, Pacific Northwest LNG (on Lelu Island near Prince Rupert), led by Malaysia’s Petronas has also delayed making a final investment decision many times. In 2015 it issued a “conditional final investment decision” after a deal with the BC government to lock in the tax and regulatory regime for 25 years (see this post for details). But conditional is not final, and this statement may have been an attempt at helping out a BC government that has staked so much political capital on LNG. Petronas still faces challenges in getting the approval of First Nations on the north coast, and is awaiting a decision from the federal government’s Environmental Assessment office in the coming weeks (my review of the project’s massive carbon emissions here).

Four years down the road, BC’s LNG dream is still just that, largely due to global market conditions.

Perhaps the best shot BC has at reaching a final investment decision is the relatively small Woodfibre LNG plant, proposed near Squamish. This plant is only a fraction of the size of the proposed Pacific Northwest LNG or LNG Canada facilities. It also does not require significant new pipeline capacity, and can tap into BC Hydro electricity (although a purchase agreement has not been signed). The project has received approval from federal and provincial governments, and from the Squamish First Nation. According to this interview, the project has buyers for half of its planned supply. But it still faces local opposition from the people of Squamish. And even this smaller proposal has significant GHG impacts (as I outlined here).

Four years down the road, BC’s LNG dream is still just that, largely due to global market conditions. While one or more LNG projects could get off the ground in coming years, they would need Asian buyers willing to pay a substantial premium over market prices for the privilege of locking down several decades of supply. Virtually no one outside the BC government believes that an LNG industry of 5 to 7 plants is realistic.

In light of the concerns that the costs of LNG development could vastly exceed benefits, this delay is a good thing for BC. Indeed, as governments begin to take serious climate action in response to the Paris Agreement to limit global climate change, future demand for fossil fuels will be squeezed in favour of renewable sources, with only lower-cost supplies being developed. The legacy of the BC government’s failure to close a deal on LNG may be saving companies from investing in tomorrow’s stranded assets, as the world shifts off fossil fuels.

More twists and turns in the dubious economics of LNGs