Eliminate and replace it: A better way to reform the basic personal tax amount

The new federal Liberal minority government has signalled that a tax cut will be its first order of policy business. That’s a shame because this tax cut will do little for those with low incomes while providing the most benefit to higher income households—and there are better ways to benefit Canadians who need the help.

The proposed cut will also come at a cost: $6 billion in lost revenue.

When there is so much need for public investment in areas like housing, child care and pharmacare, it makes little sense to punch a $6 billion hole in the federal budget. These funds would be better used for direct public investment in these service areas, where market failures have festered and added enormous pressure onto household budgets (as the costs of privatized provision have soared).

This tax cut will also unnecessarily starve us of $6 billion in public revenues.

At first blush, this might sound like a tax cut focused on low-income earners, but in practice that’s not how it works. As my colleague David Macdonald showed in his recent analysis, this tax cut will direct more dollars to upper-income households than lower income ones.

Indeed, a significant portion of taxpayers with lower incomes already have enough deductions not to pay federal income tax, so expanding this exemption does nothing for them.[1] Only families with multiple earners at high enough incomes can gain the full benefits from the proposed tax cut.

You can see the full distribution in David’s figure reproduced below. Income tax cuts in general tend to make the overall tax system less fair in this way as his analysis of the proposed Conservative cut also showed. 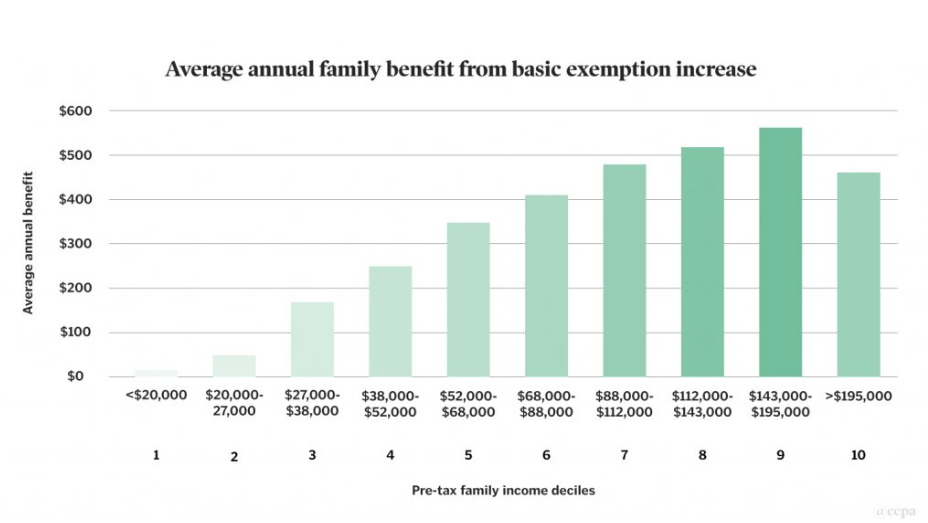 As mentioned, this tax cut will also unnecessarily starve us of $6 billion in public revenues at a time when investments are badly needed in areas from affordable housing to Pharmacare.

There is a different approach to reforming the “basic personal amount” that Canada could consider: eliminate it and use the revenue currently allocated to this tax exemption to create a new, more fairly distributed cash transfer in its place.

As we have already seen, the benefits of raising the basic personal amount skew towards higher earners. The same is true of the even larger existing portion of this tax exemption, which Finance Canada estimates will cost a whopping $38 billion (in foregone revenue) in 2020.

Scrapping this tax exemption and replacing it with a fairer alternative has the advantage of being revenue neutral. This approach wouldn’t shrink the funds available for critical public investments and it would help tackle inequality and put more cash in the pockets of low- and modest-income households. Crucially, those who don’t currently pay federal income tax would still benefit in contrast to the federal government’s tax cut proposal.

Instead of increasing the basic personal exemption, we could scrap and replace it.

The New Economics Foundation in the United Kingdom recently outlined such a plan to eliminate the UK version of the basic personal amount and use the additional tax revenue for a new universal transfer payment of £2500 to almost everyone. Under the proposal, the new cash payment would more than balance the elimination of the tax exemption for low and modest earners, leaving these groups with more cash in their pockets.

Middle and upper-middle income earners would be unaffected because eliminating the exemption would be offset by the cash transfer. Those near the top of the income scale, who benefit most from the existing tax exemption, would end up paying more. After all, why should high-income households get an exemption from paying tax on their incomes? A figure from the UK report (reproduced below) illustrates the net benefit (or cost) of the plan for households across income levels in that country.[2] 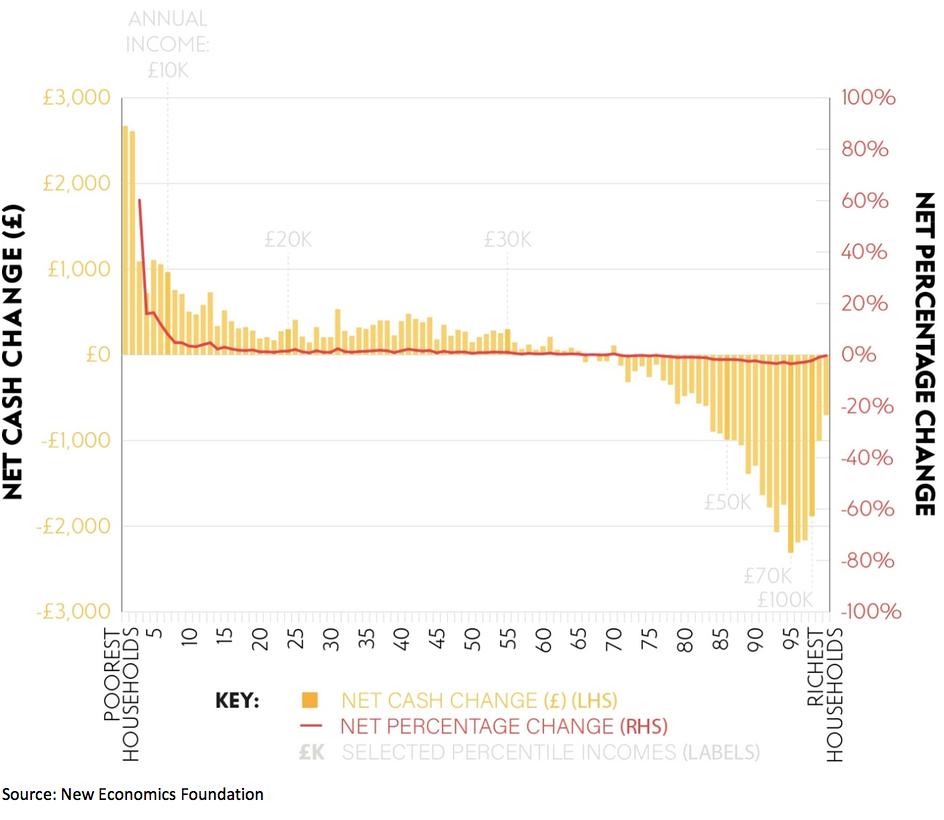 Canada should consider an approach along these lines. Instead of doubling down on the status quo by increasing the basic personal exemption, we could scrap and replace it.

Certainly, some important design details would need to be worked out. These include when the new transfer would be paid out to households (in the UK proposal it’s weekly) and whether it would differ by income level (in the UK proposal the highest income earners don’t receive it). To determine the total revenue available for the new transfer (and so the total size of it), we would also need to take into account any resulting savings in existing federal or provincial means-tested benefits.

While my focus here has been on federal policy, provincial governments could also consider replacing their own provincial basic personal amount exemptions in the same way. Of course, this tax exemption is only one piece of the puzzle when it comes to addressing inequality and tax fairness in Canada. An aggressive, wide-ranging approach is needed to tackle extreme wealth concentration.

In short, the current federal basic personal amount represents over $38 billion in forgone tax revenue and those benefits flow disproportionately to households on the upper end of the income scale. The government is proposing to increase this exemption, which would only further the disparity and reduce the funds available for badly needed public investments. As an alternative, Canada could consider the possibility proposed by our UK counterparts: eliminate the basic personal amount and replace it with a well-designed cash transfer, ensuring public dollars flow where they’re most needed.

[1] Keep in mind that these households may not be paying federal income tax, but they will still be paying many other taxes including consumption taxes.

[2] Note that the UK plan includes a couple of other smaller elements and this full suite of changes is reflected in the figure shown. By far the largest component of the plan is the elimination and replacement of the personal exemption. Further details are described in the report.

Fairness by design: a framework for tax reform in Canada 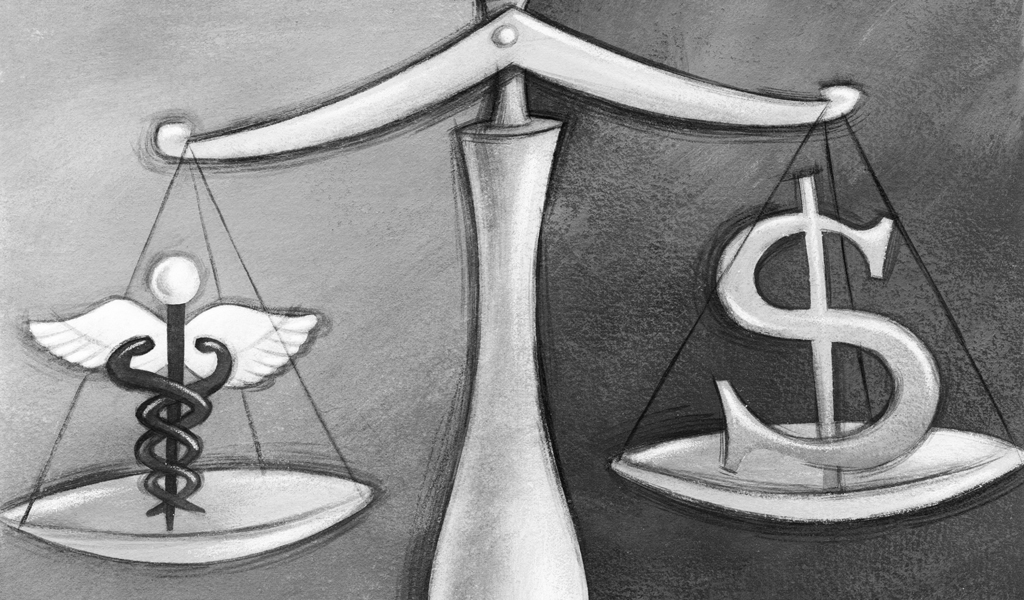