By Seth Klein and Vyas Saran

This is the first post of a series explaining the benefits of proportional representation and debunking myths from the ‘No’ side of BC’s 2018 electoral reform referendum. More from the series is available at policynote.ca/pr4bc.

As British Columbians consider trading in our centuries-old electoral system for one where all our votes count, our politicians cooperate and our governments get only the power they deserve, don’t be surprised if—in more polite language, of course—we’re called stupid along the way.

In the lead-up to the referendum on electoral reform this fall, a favourite argument of the ‘No’ side is that the whole affair is frightfully confusing—that the options before us are just “too complicated” for British Columbians to navigate.

Yet most of us understand why we’re being asked to consider a change: because our antiquated first-past-the-post (FPTP) system, while simple on the surface, leads to perverse outcomes—like a party with only 40% of the vote getting 100% of the power—that have no place in a modern democracy. Is that fair?

The electoral system we currently use consistently produces results in which the makeup of our legislature does not reflect the will of the people.

The electoral system we currently use consistently produces results in which the makeup of our legislature does not reflect the will of the people, and governments that rule by partisan decree without majority support.

The ballot questions are in fact fairly straightforward

In truth, this referendum is pretty simple.

Attorney General David Eby released his proposed plan for the referendum in late May, and it has now been accepted by the government.

The mail-in ballot, which British Columbians will be asked to return in November, will have two questions. The first question on the ballot will ask whether or not voters want to change from our current FPTP system to a form of proportional representation (or “pro rep”). We have confidence that our fellow citizens will be able to manage this task. The second question on the ballot will ask voters to rank three alternative pro rep options (which people can do even if they don’t want change, or which they can opt not to do). Again, ranking three alternative options is a task we think most people can manage just fine.

And importantly, if the public votes to change the system (via question one), the choice of which system to replace it with is in the hands of the voters, rather than the politicians. 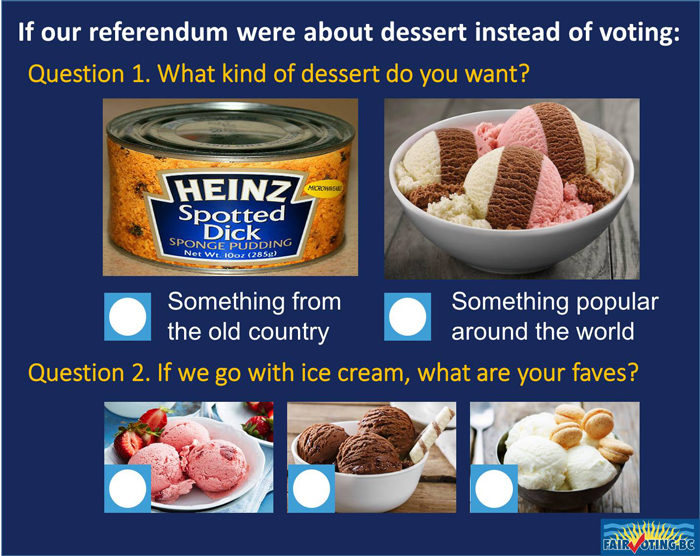 Three models are on offer

The second question on the ballot will ask us to rank three pro rep systems:

Fair Vote Canada-BC has produced some very nice summaries of all three alternative models on offer (including graphics, sample ballots and videos), which you can find at: fairvote.ca/bc-pr-systems

Each system has its strengths and weakness, but they all represent a huge improvement over what we have now. In short:

Importantly, all three of these alternatives preserve local representation (using, in part, a version of our current FPTP system), but also produce results that are proportional—a legislature that reflects our actual preferences. The proposed new systems also ensure that ultra-fringe parties will be locked out (as parties have to win a minimum of 5% of the provincial vote in order to gain a top-up seat).

Two of the proposed systems—Rural-Urban and Dual Member—have been criticized because they are new innovations that are not in place elsewhere. But that just means they’re unfamiliar to British Columbians, not “too complicated.” Moreover, the systems on offer should be those that can accommodate the diverse nuances of BC. Why simply copy-and-paste the systems that other countries use? We have a unique opportunity to choose a made-in-BC system that best captures how we want to balance local representation with proportional outcomes, and urban and rural interests.

Of the three alternatives on offer, Mixed Member is the best known, and various forms of it are currently employed in other countries (including Germany and New Zealand, where a portion of seats are drawn from party lists). But even with this option, on offer for BC is a modified version of Mixed Member in which the list seats will be regionally based to bolster local representation.


We have a unique opportunity to choose a made-in-BC system that best captures how we want to balance local representation with proportional outcomes.

The pro rep alternatives on offer aren’t “too complicated.” More than half of the world uses proportional representation. The large majority of democracies on our planet use some form of pro rep, many of which, like the options before us, combine local representation with proportionality in innovative ways. Surely British Columbians are as clever as all these other good folks; to imply otherwise is, frankly, insulting.

In contrast to the three proportional models proposed, our current FPTP system distorts and wastes votes cast by people who happen to live in the wrong place, particularly in “safe ridings.” The way things are, if you’re a Conservative or Liberal voter in East Vancouver or a progressive in Prince George, our current democracy not only doesn’t work for you, but it also treats you like you don’t exist.

The FPTP system far too frequently grants winning parties false majorities; parties with about 40% of the popular vote get 100% of the power, and rule with virtual impunity for four years. A system that does that is a bad system, full stop.

Surely we can do better. British Columbians deserve a democracy that doesn’t take away your right to have a voice you want in the halls of power. And one that ensures that you will have, in relatively close proximity, a local representative who shares your political values.

If we do vote to change our system this fall, the benefits coming our way are great, regardless of which of the alternative models we choose. Pro rep will mean having a legislature that much better reflects the real preferences and backgrounds of the voters. It will also lead to far fewer safe ridings, and thus more meaningful competition and fewer wasted votes. And people will be liberated to “vote their values,” which research shows plays a major role in the increased voter turnout that proportionality produces.

We’ll have more to share in the coming weeks, including debunking the myths that pro rep will empower far-right parties (witness Doug Ford and Donald Trump, both elected under FPTP), that pro rep harms local representation, and that pro rep produces minority governments that are too unstable and ineffective. And we’ll outline why pro rep leads to better public policy. Stay tuned…

series:
Electoral reform in BC

From October 22 to November 30, 2018, British Columbians voted on a new electoral system for our province.

The ballot will asked two questions: Do voters want to change from our current first-past-the-post (FPTP) system to a form of proportional representation (“pro rep”)? The second question asked, if British Columbia adopts a proportional representation voting system, which of the following voting systems do you prefer? And people got to rank their preferences between Mixed Member, Dual Member or Rural-Urban.

The CCPA-BC has determined that pro rep would much better reflect the real preferences and backgrounds of BC voters. In the lead-up to the referendum, we published a series of posts explaining why, and debunking myths from the ‘No’ side.

Vyas is a law student and was the 2018 Rosenbluth Intern in Policy Research at the CCPA-BC, where he was thrilled to be a part of the progressive ecosystem in BC. In addition to his work on electoral reform, his writing has been published nationally on partisan strategy and coalition governments. He has special interests in labour, public housing, indigenous and migrant rights, climate action and all else to do with the politics of liberation.

Previously, Vyas has worked in politics, legal advocacy, education and sports writing before completing his BA in political science at UBC.