There’s no doubt that climate change and fossil fuel extraction were vote determining for significant sections of the population in the federal election.

These issues dominated the federal leaders’ debates and since September we’ve seen hundreds of thousands across the country join student-led climate strikes demanding more robust climate action. Such demands are likely to grow as the effects of climate change become more severe and the window closes to avoid catastrophic climate-related impacts. 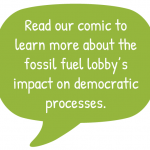 While the Justin Trudeau-led Liberals again campaigned on a promise to more aggressively fight climate change, the question of why Canada has been so politically paralyzed in pursuing decisive climate action and how to overcome this paralysis is urgent.

It’s a problem of central concern to us at the Corporate Mapping Project, a research initiative investigating the power and influence of the fossil fuel industry.

We published a study today examining federal lobbying by oil, gas and coal companies and their industry associations across a seven-year period from 2011 to 2018. The period allows for a comparison of lobbying under the Stephen Harper Conservatives and the Trudeau Liberals and the findings are troubling. They do help, however, explain the close coupling of federal policy to the needs of the fossil fuel industry.

Examining records at the Office of the Commissioner of Lobbying of Canada, we found that the fossil fuel industry recorded 11,452 lobbying contacts with government officials over this period—significantly more than other sectors and amounting to just over six contacts per working day. Presumably due to having far greater resources, the sector lobbied the federal government at rates five times higher than environmental non-governmental organizations.

This is important because lobbying is intended to influence policy and for this sector specifically decisions related to major environmental assessment acts, national energy strategy, pipelines and consultation processes with First Nations. The intensity of lobbying increased when salient policy issues—like the Environmental Assessment Act—arise or when there are big stakes for industry such as major pipeline decisions and approvals.

We found that lobbying is highly concentrated among large fossil fuel firms and key industry associations (which control much of this economic sector) and is targeted at a few key offices and individuals within government. There is intense interaction among relatively few lobbyists and key designated public office holders who are in regular contact with each other.

In comparing lobbying across the Harper and Trudeau administrations, we found a pattern of continuity-in-change: under Trudeau, the bulk of lobbying was carried out by the same large firms as under Harper, while lobbying focused on fewer government agencies, particularly Natural Resources Canada and Environment Canada. Under Trudeau, senior government bureaucrats rather than members of parliament were the focal targets of lobbying. Key decision-makers that remained after the 2015 change of government were targeted, which is concerning as it indicates that elite policy networks outlast election cycles and potentially the stated platforms of elected officials.


Our study confirmed that lobbying is dominated by wealthy and corporate interests and is conducted largely away from public view, indicating a clear need to substantially tighten the Federal Lobbying Act to enhance transparency.

Such measures can bring lobbying more fully into public view and in turn help limit the undue influence of private interests over public policy. However, reforms are needed that go beyond increased transparency to equalize opportunities for political influence between industry and civil society groups. Such democratizing measures can challenge and limit corporate power, which is critical to achieving sustained and robust climate action.

This Corporate Mapping Project is supported by the Social Science and Humanities Research Council of Canada (SSHRC).