This fall we presented recommendations to the provincial government’s “Commission on Tax Competitiveness”, which released its final report today. But the Commission suffered from a basic flaw: an exclusive focus on business taxes. What about how BC’s overall tax system affects the large majority of British Columbians? The Commission’s terms of reference precluded consideration of wider questions of tax fairness or how to fund requested business taxes cuts.

Given BC’s high levels of poverty and inequality, this is a big problem. Our tax system has grown increasingly unfair (the richer you are in BC, the lower your overall tax rate), and we are wrestling with the consequences of years of under-investment in education, housing, childcare, social assistance and climate change.

So, it’s worth asking: do business taxes require our urgent attention? Are BC businesses sagging under the weight of an unfairly high tax burden? 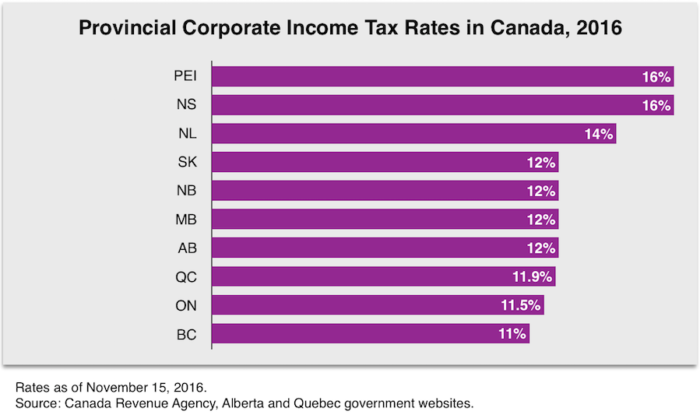 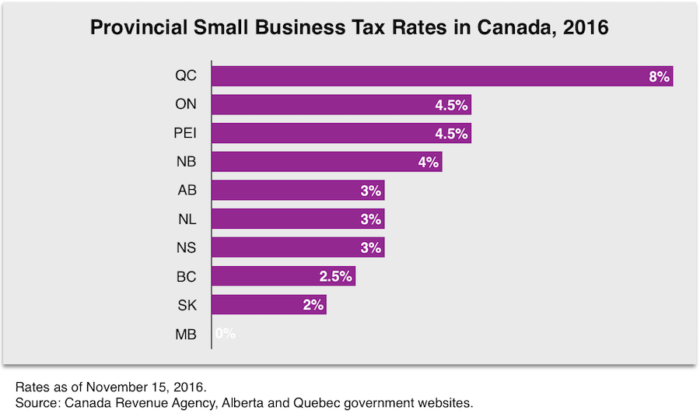 Clearly, the Tax Competitiveness Commission’s mission was a solution in search of a problem.

If anything, we currently have room to increase business taxes in BC (and Canada), without encountering any competitiveness impacts. We can certainly ask business to chip in more, while staying safely in the middle of the pack when it comes to tax rates among our main provincial and international economic “competitors”.

Some business lobbyists argue that lower taxes would attract businesses to invest in BC, but in reality taxes have a small effect on business investment decisions. The proximity to markets and to a skilled workforce, the availability of appropriate infrastructure, and access to cheap energy are much more important considerations when a firm is deciding where to set up shop – rather than the business tax system.

More importantly, the cycle of jurisdictions trying to outdo each other with endless business tax cuts is ultimately a sucker’s game; it’s a race to the bottom in which the public never wins. Instead of playing that game, BC should be working to broker cooperation between the provinces with respect to business taxes. After all, we don’t elect our governments to compete with each other but to collaborate in the public interest. A corporate tax race to the bottom does nothing but erode the fiscal capacity of our governments, at a time when public investments are needed more than ever.

A corporate tax race to the bottom does nothing but erode the fiscal capacity of our governments, at a time when public investments are needed more than ever.

The central recommendation of the report from the BC Commission on business taxes was to exempt capital expenditures on machinery and equipment and other business input costs from the Provincial Sales Tax (PST). The Commission claimed that charging the PST on these inputs undermines investment and therefore productivity and income growth. Much of this is over-stated. That said, there may be a case to be made for a change in the mix of taxes that business pays. Maybe the Commission is right that we should exempt some capital inputs from the PST. But that doesn’t come free. The full set of business tax exemptions recommended by the Commission would cost $1.1 billion annually in lost government revenue.

If business groups have a more efficient and productive business tax mix in mind, they should make clear how they would like to pay for it. Specifically, if business wants a reduction in some of their PST costs, then it should be paid for by an increase in the general corporate income tax rate. The business sector should not be asking BC families to pay for yet another corporate tax cut. Again, overall business taxes are already plenty low.

Equally important, why the laser-like focus on business taxes when BC’s overall tax system has become remarkably more regressive and unfair since 2001?

For example, we’ve seen MSP premiums more than double, hitting folks with lower and middle incomes hardest. It’s a lot easier to pay $75 a month in MSP charges if you make $400,000 a year than if you make $40,000. We’ve reached the point in BC where the province now collects about the same amount in MSP premiums as it does in corporate income taxes.

The business sector should not be asking BC families to pay for yet another corporate tax cut.

We’ve also seen cuts to provincial income tax rates that delivered the biggest bang to the richest British Columbians. Strikingly, a household in the top 1% now pays about $41,000 less in annual income tax than they did in 2001. All this amounts to a move away from a system where those at the higher end of the income ladder pay a larger share of their income than those in the middle or at the bottom. In fact, today the top 1% actually pay a lower overall tax rate than the vast majority of the population.

Meanwhile, provincial public spending as a share of BC’s total economic pie has dropped substantially from 21.7% of Gross Domestic Product in 2000 to an estimated 18.6% in Budget 2016, and is projected to fall even lower in the coming years. This shrinking of the provincial public sphere comes when we need investment to tackle urgent problems like skyrocketing housing costs, unaffordable child care, persistent poverty, rising inequality and accelerating climate change – all issues that arguably have a greater impact on business and productivity than the PST.

Rather than a commission narrowly focused on business taxes, what we need in BC is a comprehensive “Fair Tax Commission”. All taxes and natural resource royalty programs should be on the table. The Commission should meaningfully engage with British Columbians from all walks of life throughout the province about the services we want, how we can pay for them, and how we can restore some basic fairness and progressivity to our tax system.