We sit less than a year away from the next provincial election in BC, and the legislature has now closed its doors for the summer. It’s a good time to reflect on an important, big-picture question: what kind of path are we on in this province when it comes to public policy?

While recent economic growth in BC has been at a slightly higher rate than the rest of Canada, we are facing a range of urgent social problems.

For example, major education cuts are coming to the our largest school districts, which face multi-million dollar funding shortfalls from the provincial government. Our health care system is increasingly overloaded, with seniors’ homes desperately understaffed and failing to meet government guidelines. At the same time, basic social assistance rates haven’t budged in almost a decade, even as housing costs continue to skyrocket.

Yet we’re told that action on these crises will have to wait — that the costs of public services are high and rising, and any major reinvestment in education, health care and poverty-reduction is impossible without faster economic growth (which, according to the latest BC budget, the government does not expect).

One good way to cut through the rhetoric is to focus on hard numbers, and we can learn a lot from the numbers in the 2016 BC Budget and Fiscal Plan. In reality, BC has the fiscal capacity to begin tackling the crises we face now — it’s a matter of priorities.

Let’s begin with education.  At first glance, the 2016 budget shows education spending (K-12 and postsecondary) increasing by an average of 1.7% annually, from $11 billion in 2009 to a projected $12.9 billion by 2018. But once you begin to factor in inflation, population increases, and economic growth, things look quite different.

In fact, as a share of BC’s total economic pie, public education funding is actually decreasing. By 2018, education spending is expected to fall to 4.7% of the province’s GDP, down from 5.7% in 2009.

This is important because how much of the pie we’re spending on public services is a more accurate reflection of our collective ability to pay for them, rather than simply looking at overall dollar amounts.

Next, let’s take our public health care system. We often hear in the media about spiralling costs, and indeed health spending in BC is increasing faster than other areas, rising from $15.3 billion in 2009 to a projected $20.8 billion in 2018.

There’s no question that these are large numbers – but public health care spending is hardly breaking the bank. Again, when we look at these dollars relative to the size of our overall economy, we get a more accurate picture. In fact, health spending has been relatively steady in recent years and is now expected to fall somewhat from 7.8% of GDP in 2009 to 7.5% in 2018.

Now, to be clear, improving public health care does require dealing with problems in the system, such as deep cuts to home and community care, which have increased expensive emergency room visits and loaded new pressures onto overcrowded hospitals.

But public sector solutions for improving health care are already at our fingertips. Health policy research shows the need to reinvest in home and community care, develop interdisciplinary teams of healthcare professionals, and use innovative best practices to reduce surgery wait times. These types of measures both increase quality of care and help contain costs.

Unfortunately, the persistent failure to make these types of long-term investments in the public health system means we actually end up spending more to get less.

Similarly, research from the CCPA’s Iglika Ivanova estimates that inaction on poverty costs British Columbia at least $8-9 billion every year. In contrast, a comprehensive poverty reduction plan would cost $3-4 billion annually. For example, a program to fund housing for the homeless would actually be cheaper than the status quo, by reducing the strain on expensive public services like ambulance calls.

Overall, provincial spending compared to the overall size of the economy (as a percentage of GDP) has dropped from 21.7% in 2000 to 18.6% in 2016, and is projected to fall even lower in the coming years. Meanwhile, the tax system has become less fair through policies like tax cuts for high income earners and hikes to the regressive and unfair MSP tax. 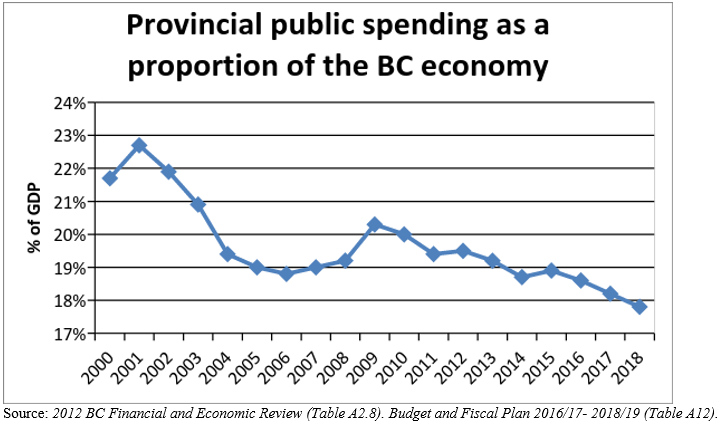 But new investment is possible. By restoring provincial government tax revenue to the 2000 share of GDP (10.9%), BC would have over $3.5 billion more to invest each year in education, health care, and raising social assistance rates – not to mention other critical priorities such as child care and climate action. In fact, if we had the same total share of the economic pie dedicated to public spending as in 2000, that would mean over $7 billion more available.

Meanwhile, the current lack of investment in BC’s public services is costing us billions, and, more importantly, perpetuating poverty, putting the environment at risk, and ultimately damaging people’s lives.

They say politics is the art of the possible, which is usually meant as a warning to restrain ambition and expectation. But when you get down to the hard numbers, for BC, the possibilities are significant and within our grasp.

The real impact of HST’s defeat on provincial finances