BC dead last on inequality: BC Stats

Last Friday BC Stats, the BC government’s statistical agency, weighed in on the topic of income inequality.  The CCPA has talked about this subject for years 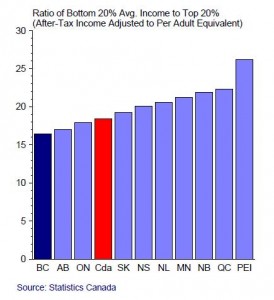 and it is nice to see that BC Stats has not only acknowledged the problem but says that:

Compared to other provinces, BC ranked dead last in 2009, with the largest gap between the top 20% and the bottom 20% of income earners.

The report starts by looking at how Canada ranks in international comparisons (badly) and then goes on to look at British Columbia.  It points out that BC does much worse at using its tax and social programs to mitigate inequality than other provinces.  BC ranks 5th on income inequality just looking at market income (excluding government transfers and before taxes) but last after transfers and taxes. As BC Stats notes, this indicates that other provinces:

have had more success in terms of redistributing income through tax and benefit systems than have British Columbia and Alberta.

In a free market society like Canada there will always be some that are better off than others, but the challenge is figuring out how large a gap between the highest and lowest earners should be considered acceptable. Given the size and vehemence of the Occupy protests, one would suspect that the current income gap is too large.

And one would hope the government itself would begin to acknowledge the problem. BC remains one of the few provinces without a poverty reduction strategy.