A fascinating, and shocking, literature on the incomes at the very top of the distribution has emerged in recent years. Typically, Statistics Canada only reports income distributions for quintiles, or 20% groupings, and occasionally deciles, or 10% groupings. But new research based on tax filing has shown that the real action has been at the very top. The share of income going to the top 1% fell a great deal after World War II and continued to do so up to the late-1970s, but since then the trend has reversed itself and in recent years the income share of the very top is back up to where it was in the 1920s and 1930s.

It does not have to be this way: these trends are prominent for the Anglo countries (US, UK, Canada, Australia and New Zealand) but the trend towards a growing slice of the pie going to the very top has not proven to be the case in countries like Japan, France or Sweden. This corresponds to the shift in political economy of the Anglo countries away from the norms of the post-war decades that saw growing public services and income supports for the poor, with governments that more tightly regulated labour and goods markets, and towards a return to smaller government and more emphasis on markets as the arbiters of social and economic outcomes.

In a recent update of the Canadian data by Mike Veall of McMaster University, for the first time we have provincial data to show how dynamics have played out across in different parts of the country. In BC, for example, the top 1% received 7.8% of income in 1982, and this surged to 13.4% in 2007. After taxes and transfers, the situation is a bit better but not really that much, and the trend is the same: the top 1% received 6.6% of income in 1982, rising to 12.0% in 2007.

BC’s results roughly track the national trend, and it is notable that the top market income share is larger in both Ontario and Alberta, and smaller in every other province. After taxes and transfers, however, Ontario’s top 1% only got a measly 10% of the total income pie, making BC number two in terms of inequality after Alberta. As the Table shows, other provinces do a much better job of keeping top incomes in check. 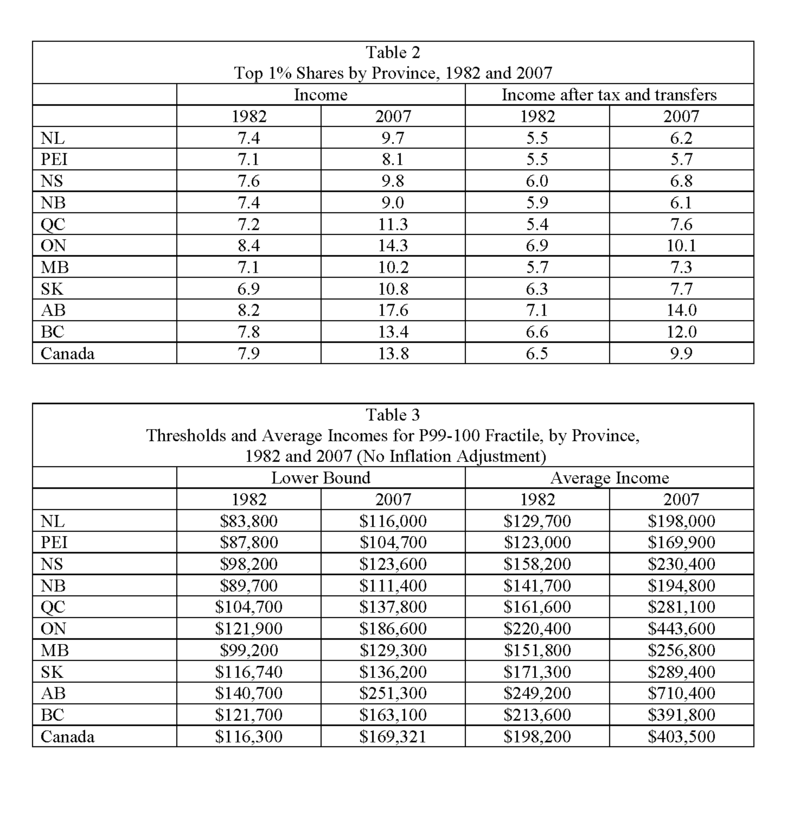 How the Pie is Sliced in BC