The false economy of BC Budget 2012: deficit exaggerated to avoid spending on real problems

Today’s BC budget was simply titled Budget 2012. It broke with the tradition of ambitious-sounding titles we’ve seen in the last decade (such as 2010’s Building a Prosperous British Columbia budget), but that’s about all the change you’ll notice from the previous administration’s budgets. Despite the fact that this was hailed as the first budget released by Premier Clark, her opportunity to bring change and show what her family first agenda means in practice, there were no bold policy changes announced here. 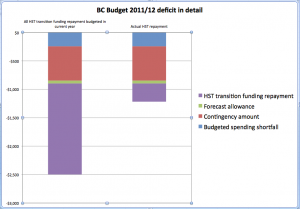 The overarching theme of Budget 2012 was fiscal prudence. In choosing to aggressively pursue a balanced budget in 2013/14, the government decided not to tackle the serious social issues that BC families face: abject poverty and homelessness, growing income inequality and increasingly poor job quality. There is nothing in this budget to ensure that BC will be able to meet its climate commitments, let alone introducing new and bold initiatives to address climate change. Children, vulnerable seniors and British Columbians were asked to wait until the economy improves while the government chose to use its limited public resources to extend a tax break of up to $42,500 each to wealthy buyers of new homes and recreational properties valued between $525,000 and $850,000.

The government announced they may temporarily increase corporate income taxes from 10 to 11 per cent but not until 2014 and only if the economy turns south and the provincial finances end up worse that currently projected.

This is highly unlikely. The 2012 BC Budget builds in an extraordinary amount of fiscal prudence. The government’s GDP growth forecast of 1.8 is beyond conservative – it’s a full 0.4 percentage point lower than the private sector forecast of 2.2% growth. Minister Falcon himself acknowledged that this conservative estimate alone builds in a half-billion-dollar cushion in revenue estimates. Additionally, there’s another half a billion dollars cushion in contingencies and forecast allowance for 2012/13.

This is more than prudent budgeting or discipline – it’s deliberately underestimating the amount of money the government has to work with to pre-empt the public debate on priorities.

Much of the budget discussions would be focused on a single number: the 2011 budget deficit. Today’s budget projects a deficit of $2.5 billion in the current fiscal year, down substantially from last fall’s estimate of a $3 billion deficit (according to the Second Quarterly Report). But what most analysts and commentators don’t realize is that just over half of this budget deficit, or $1.3 billion is just an accounting artifact of the way the government’s chosen to account for the repayment of the HST federal transition funding. Earlier this spring, the BC government negotiated a deal with the Feds to repay the $1.6 billion HST transition funding over five years in five equal payments of about $320 million and with no interest. However, the entire $1.6 billion amount is recorded as an expense in 2011/12 even though the province only owes $320 million in the current year.

The Ministry of Finance says that this is a standard practice of the accounting system they use, GAAP (generally accepted accounting principles).  This may well be the case – accounting practices are sometimes known not to make common sense — but the Minister must be straightforward with British Columbians and clearly explain that situation. The Minister needs to be very clear about the fact that while the current deficit appears to be $2.5 billion in reality, the real shortfall in government finances is $1.2 billion this year, of which $650 million is a cushion of contingencies and forecast allowance. Pretending that the budget shortfall is actually $2.5 billion is dishonest and deliberately misleading to BC families.

In fact, digging more deeply in the estimate for the 2011/12 deficit, one finds that the actual budgeted shortfall – the amount that budgeted expenditures exceed the projected revenues – is only $245 million. The government must repay $320 in HST transitional assistance to the federal government this year, leading to an actual budget shortfall of $565 million.  Another $653 million provides a cushion of contingency and forecast allowance. The remainder $1.3 billion is simply a GAAP accounting artifact that makes the provincial finances look particularly bad than it actually is in this fiscal year and slightly better than it actually is over the next few years.

It’s also quite curious that the 2012 budget includes a $603 million contingency allowance for 2011/12 with only a few months left of the fiscal year. This contingency allowance is unlikely to be spent and will probably result in the government finances coming well ahead of forecast next year.

Politically, this will have the effect of the budget deficit falling dramatically just in time for the next election without the provincial government making any changes.

Making the current year budget look more stretched than it actually is also helps the government drive home the politically convenient message that we can’t afford salary increases in the public services, that we can’t afford to increase supports for the most vulnerable citizens: children and seniors living in poverty.

This can’t be any further from the truth – we are in a relatively good financial position when the current economic environment is considered. The government is simply making a choice to use accounting artifacts and conservative forecasts to further their ideological position of small government instead of taking a sober look at the serious problems BC faces and meaningfully addressing them.

There were a few new token spending announcements in this budget, but none of them amounted to meaningful change. The new provincial children fitness and arts credit is barely worth mentioning – at its maximum, it will provide up to $50 per child and only if the parents spent over $1,000 on eligible fees. Families struggling with poverty will likely get nothing as they cannot afford the upfront fees to begin with. It would have been a lot more prudent to spend these $9 million per year to enhance fitness and arts programs in BC’s public schools where all children could benefit.

Some new funding was announced for the Justice system ($237 million over 3 years), but only $6 million of this will go towards much needed legal aid, way less than what’s needed to ensure that the justice system works for low income families in BC.

There is no increase in our woefully inadequate income assistance rates, which were last increased five years ago in 2007 and have been substantially eroded by inflation since. Cost of food has risen considerably since then, so have rents. The Dietitians of Canada’s Cost of Eating reports have shown clearly that a family on welfare cannot afford the cost of a minimally nutritional diet after they pay rent & utilities. Yet, the entire amount of the new funding for income assistance $294 million (over 3 years) is going towards meeting existing caseloads. This is a lost opportunity to help the most needy.

The only real winners in this budget are the wealthy, who continue to enjoy some of the lowest income tax rates in the country and will benefit from a new dividend tax credit, costing the public purse $7 million per year (almost as much as the new children tax & fitness credit). The wealthy will also be the ones who will benefit from the new tax break of up to $42,500 per property when purchasing a new recreational tax property costing up to $850,000. The cost to the public purse of the HST rebate for new housing already added up to $476 million per year and will now grow by another $84 million as that the tax credit has been extended to recreational properties and the maximum cost threshold was increased from $525,000 to $850,000, and a new temporary first-time buyers bonus tax credit was introduces. But hurry and buy fast as this offer lasts only until 2013/14.

In his budget speech, Finance Minister Falcon asked to be evaluated on outcomes, not promises, touting our high life expectancy rate as an example. But he’s conveniently ignoring other important outcomes, like our embarrassingly high child poverty rate, which at 12% is the highest in the country, or the unacceptably poor conditions many of our grandparents face when aging and dying without dignity in substandard seniors care homes.

Over the last decade, government has reduced its support for a number of services and shifted the cost to individuals and families. When the public sector withdraws from services British Columbians rely on, whether it’s education for children, mental health services in the community, supports for people with disability or seniors living in residential care homes, the onus is on families to pay extra.

There is also false economy in failing to deal with the root causes of these problems. If we don’t invest in programs that prevent homelessness and poverty, that keep seniors as healthy as possible in their homes – we don’t save these money. We end up paying later through higher emergency room use, higher health care spending, more policing and justice system costs, and lost economic activity. This is the legacy of Budget 2012.