Media attention may still be firmly focused on athletes and tourists today, but we’re already starting to see hints about what will dominate BC’s post-Olympics discourse.

The fear-mongering around our provincial debt and deficits is making a return with groups like the Canadian Taxpayers’ Federation arguing that debt is getting out of control (for example, here).

However, the facts simply do not support their assertions. Yes, we have a budget deficit, but this is exactly what one should expect on the heels of a global recession that hit BC harder than our last downturn in the 1990s. Leading economists around the world agree that governments must spend in order to boost the economy and help families weather the economic storm even when this means running temporary budget deficits.

So the revelant question isn’t whether or not to run a deficit, but how big the deficits should be.

And how is BC’s budget deficit doing? CIBC’s calculations show that BC has one of the smallest deficits in Canada, relative to the size of our provincial economy (GDP) (see Chart 6 in this recent report). That’s despite the fact that we were one of the provinces hardest hit by the recession. 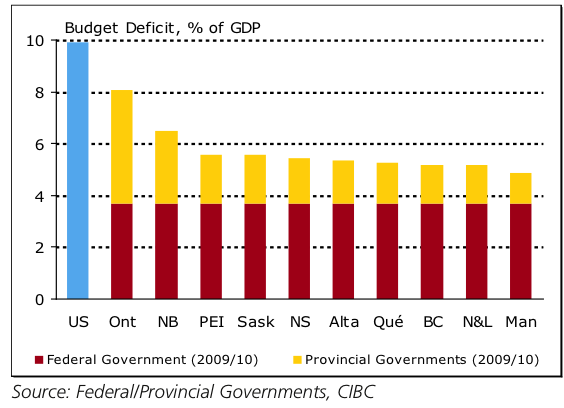 Note that these calculations were done before Alberta’s 2010 budget was released on February 9 and thus may underestimated Alberta’s budget deficit.

The chart shows clearly that everywhere except for Ontario, provincial deficits as a share of GDP are less than half the size of the federal deficit (3.7%).

What about provincial debt? The recent temporary increases are far from unaffordable. In fact, of all Canadian provinces, we’re among the best-positioned to borrow now in order to continue stimulating our economy and meeting human needs. 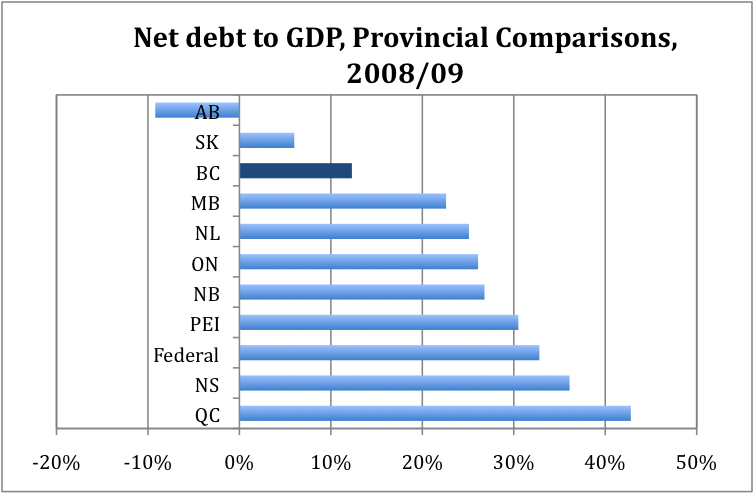 These facts won’t surprise regular readers of this blog, as I’ve written about them before. But as we prepare for what is rumoured to be another round of so called “restraint” (aka cuts), it’s more important then ever to go back to the facts.

At this stage, there is absolutely no need to panic about the size of BC’s deficits or the provincial debt. For more info on what we should worry about instead, check out CCPA’s Budget 2010 advance warning and my recent op-ed in the Vancouver Sun, A post-Olympics vision is needed for BC.

Should we be afraid of the government debt?