Here’s a different take on Kinder Morgan’s ultimatum and the so-called “constitutional crisis” it has sparked. I’m speculating, of course, as we all seek to understand what Kinder Morgan is really up to. But allow me to posit a minority theory:

It is entirely possible that Kinder Morgan has already decided to cut its losses and walk away from the Trans Mountain Pipeline Expansion (TMX)—and not for the reasons they are telling their shareholders or the public. It may well be that the May 31 deadline is merely for show, and the Texas-based corporation has already determined the project is not feasible both for economic reasons and due to profound Indigenous and popular opposition.

The economics of the project have been on shaky ground for some time, as the CCPA has extensively documented. Particularly since the Trump administration’s revival of the Keystone XL project, and with the approval of Enbridge’s Line 3 expansion, the industry’s need for TMX pipeline capacity has been undercut (which helped to kill the Energy East proposal). The temporary gap in oil prices internationally compared to in North America is now largely gone, undercutting the case for Pacific “tidewater” access. And the higher costs of extracting, refining and transporting oil sands bitumen further erodes the economics. I testified before the federal government’s Ministerial Panel on Kinder Morgan in 2016 and sought to debunk the economic arguments made in favour of the pipeline expansion.

Layered onto the dubious economics are the growing protests, but most significantly, Indigenous opposition.

It may well be that the May 31 deadline is merely for show, and the Texas-based corporation has already determined the project is not feasible both for economic reasons and due to profound Indigenous and popular opposition.

The civil disobedience phase of TMX opposition kicked into gear March 10 with a protest of about 10,000 people on Burnaby Mountain. Like the larger movement to stop the project, the protest was Indigenous-led, with the call to mobilize coming in particular from leaders of the Tsleil-Waututh Nation and the Union of BC Indian Chiefs (UBCIC).

Full disclosure: on Saturday, April 7, I joined a group of about 25 people blocking the gates of Kinder Morgan’s Burnaby site, standing behind the full executive of the UBCIC—Grand Chief Stewart Phillip, Chief Bob Chamberlin and Chief Judy Wilson. I was prepared to get arrested, but no arrests were made that day. The company never called the RCMP asking them to enforce the injunction. Little did we know that Kinder Morgan would make its surprise announcement the next day, announcing it was “suspending non-essential spending” on TMX. But also, there can be little doubt that the company did not want images of the entire UBCIC executive being arrested beamed around the world. 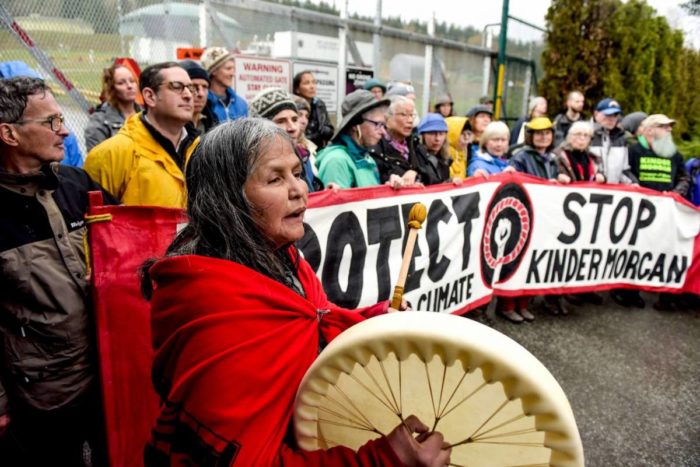 Since then, arrests have continued and now about 200 people have been charged after engaging in peaceful civil disobedience. If pipeline construction resumes, these protests are surely on track to become the largest civil disobedience in Canada’s history.

Simply put—and the Prime Minister’s assurances notwithstanding—this pipeline may never be built. And the company may finally have realized it.

But Kinder Morgan has focused on the BC government as a strategic scapegoat. And political leaders federally and in Alberta, along with much of the punditry, are playing right along.

Of all the barriers facing TMX, the BC government’s legal reference case is the least consequential. Numerous Indigenous court challenges before the Federal Court of Appeal and BC Supreme Court are more likely to succeed (legal challenges by the Tsleil-Waututh, Coldwater, Upper Nicola, Stk’emlupsemc Te Secwepemc, and Squamish First Nations all remain outstanding).

While the federal government and Kinder Morgan like to point to the 43 Benefit Agreements signed with some First Nations, these agreements do not mean the signatory nations support TMX. All they mean is that First Nations wish to secure economic benefits should the project proceed.

More importantly, consent is lacking from a number of First Nations directly along the route. The Tsleil-Waututh and Squamish Nations, whose territories encompass the Burrard Inlet at the terminus of the pipeline, vigorously oppose the project and insist they were not properly consulted. And the Secwepemc, who are also opposed, have territory covering a very large chunk of the pipeline’s route in BC’s interior.

My theory: Kinder Morgan doesn’t want to admit to shareholders the role of Indigenous opposition and the possibility of a First Nations court win as the implications of losing on this ground are surely more profound. The BC government makes a more convenient target.

My theory: Kinder Morgan doesn’t want to admit to shareholders the role of Indigenous opposition and the possibility of a First Nations court win. The BC government makes a more convenient target.

Kinder Morgan’s focus on the BC government may also have an economic angle. If the corporation is indeed ready to walk, it may be hoping to launch a NAFTA Chapter 11 challenge to recoup its losses (as TransCanada was preparing to do over Keystone XL prior to Trump’s decision to overturn Obama’s rejection of that project). If Kinder Morgan does invoke Chapter 11, the matter doesn’t go to open court, but to a secret trade tribunal where the company would argue that the BC government is unfairly harassing the project. Read more about this possibility.

A related but different theory, well articulated by Ricochet’s Ethan Cox, is we are witnessing is a corporate “shakedown” of the Canadian public. Cox’s view has more weight given Trudeau and Notley’s recent admissions that they are in discussions with Kinder Morgan about offering up billions in public money to defray investor risk in the project. If Cox is right, Trudeau and Notley’s repeated insistence that “this pipeline will be built” places them (and hence all of us) in a terrible bargaining position. They are effectively saying to the corporation, “name your price.” (Is it just me, or are others plagued by the distinct feeling that the company is laughing at us?)

Under either of these scenarios—one, that Kinder Morgan is walking and preparing to sue us or, two, that they are shaking us down in an effort to socialize their investor risk—here are three key lessons about what our governments should and shouldn’t be doing:

First, we shouldn’t take the bait. Reinforcing Kinder Morgan’s claim that BC government opposition triggered their decision to suspend or kill the project merely helps build their NAFTA case. Ironically, if a NAFTA challenge does proceed, under NAFTA rules, the defendant on the hook for damages will be the federal government, not BC. So the federal government may want to watch what it says.

Second, Canadian jurisdictions should stop fighting with each other, and walk away from this ill-advised project. It was never compatible with our Paris climate commitments, never mind our promise to implement the United Nations Declaration on the Rights of Indigenous Peoples.

Third, now that political leaders federally and in Alberta have revealed themselves to be so open to major public investments in energy infrastructure— across the political spectrum—let’s encourage them to focus those investments on the next economy, not the old fossil fuel one. A large public stake in renewable energy and climate mitigation projects will produce far more jobs and won’t become stranded assets. That’s a much wiser investment than socializing the losses of a Texas-based multinational pipeline company.

Kinder Morgan: Costs and benefits unbalanced, not in the national interest