I was prompted to write this post by the very unusual fact that, right now, Vancouver skies are smokey from the various wildfires burning in southwest BC.

Of course, skies filled with smoke and ash are not uncommon in the summer, but it’s a black day in July when fires are so widespread and so serious that even major urban areas are polluted. 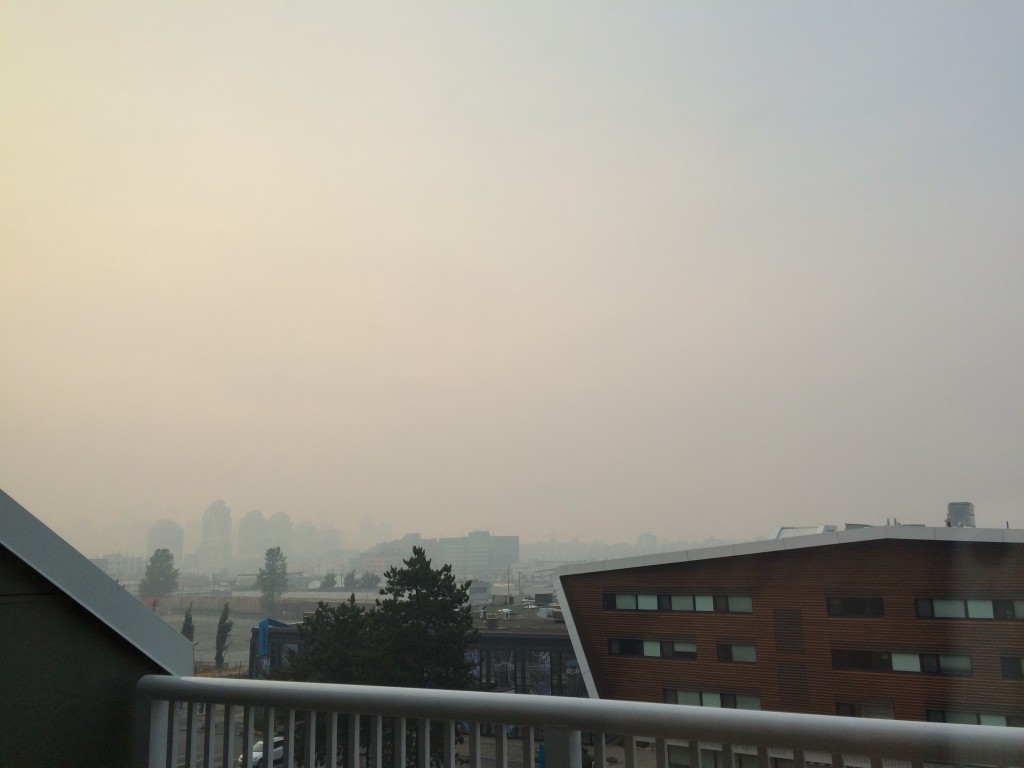 As is well understood, the main reason for the increase in forest fires in BC and the rest of Canada is the combination of increasing temperatures and decreasing precipitation (both in terms of low snowpacks and very little rain). Much of the province is suffering from drought conditions.

What is not so well understood, at least by the federal government, is that global warming is real, serious, and not something for our grandchildren to worry about. It’s happening right now.

Remember, it was this government that decided that Canada would back out of the Kyoto Accord, which required that signatory countries make minor reductions in their release of greenhouse gases, the single greatest cause of global warming.

Indeed, Canada has become a pariah at international environmental conferences because of the federal government’s indifference to global warming and other threats to our natural world. Several prominent Canadian scientists have accused the government not only of lack of interest in environmental protection, but also of going out of its way to sabotage any global agreements.

The same lack of regard is evident in a variety of federal policies, from blind support for the tar sands and oil pipelines to reductions in funding for research about the state of Canada’s environment.

In addition, there has been an unprecedented muzzling of scientists, severely limiting their ability to inform Canadians about their research. This censorship is so oppressive that scientists have been forced to demonstrate in the streets to let the public know what is happening. Scientists from many other countries have signed petitions in support of their Canadian colleagues.

Worse, the Harper government (with the support of the Liberals) brought in Bill C-51, the attack on Canadian civil liberties that many experts feel could be used to target environmentalists and other activists.

As Mel Hurtig writes in his insightful new book, The Arrogant Autocrat: “Harper’s record on the environment is not just appalling, it’s irrational, shameful and catastrophic for our country and the world.” (This short work provides readers with an extensive list of other controversial Harper policies, from unfair taxation to increasing inequality to attempts to suppress non-Tory votes, e.g. the “robo-calls” scandal).

The federal government deserves much of the blame for these undemocratic actions. The main reason that it’s in power, however, is the wide support it’s received from corporate Canada, especially — not surprisingly — from the fossil fuel industry.

Increasing numbers of Canadians understand that we cannot wait any longer to bring in serious policies to protect our environment (and create green jobs). With a federal election coming in October, it is vital to make sure that the next Parliament understands this imperative as well.

He also has a degree in Psychology, and an interest in such fields as Anthropology, History, the Natural Sciences, Philosophy, Environmental Studies, and Media. His articles have appeared in print and online including in the CCPA Monitor, and he has worked in both radio and television. He has lectured at conferences in Canada, the US, Scotland, and Greece. He now leads educational tours to Greece, and is finishing his first book, Remembering Our Humanity: A Better World Is Possible.