The Shifting Terrain of Taxes in BC: Budget signals new openness to tax increases

[The following piece was also published on The Tyee here.]

These are certainly interesting times. For all the faults in last week’s BC Budget (and there were many), it’s worth noting that the conversation about taxes has fundamentally shifted, and in a welcome direction.

After vigorously insisting for years that tax increases would be ruinous to the economy, in a significant about-face, the BC government did just that — increasing corporate taxes by one percentage point (from 10% to 11%) and instituting a new 6th income tax bracket at $150,000 of income (income above this threshold is to be taxed at 16.8% rather than 14.7%, albeit only for two years).

You could almost feel Finance Minister Mike de Jong’s pain as he announced the tax increases (even while no-doubt relishing a move that robs the Opposition of some of its revenue-raising options). “We are also asking those individuals who have a little more… to contribute a little more,” the Minister explained in his budget speech, sounding a little bit like, well, me.

Even among the wealthy and business, these tax increases have been met with a collective shrug. Perhaps they appreciate more than most just how good they have had it (and still will!). And likely many knew that Chicken Little predictions about the economic harm that would result from tax increases were always overstated.

BC income taxes remain the lowest in Canada for those with incomes up to about $120,000. And even with the modest increase contained in the proposed BC Budget on incomes over $150,000, a person with an annual income of $300,000 would still pay the fourth lowest taxes in Canada (only Alberta, New Brunswick and Newfoundland’s effective tax rates are mildly lower). The total tax bill for a person making $300,000 increases by only $3,100 under the proposed new rate. Clearly, there remains room for further increases to upper-income tax rates.

Ditto for corporate taxes. Last year, the global accounting firm KPMG examined businesses taxes in 55 major cities in 14 countries. Their finding: Vancouver has the second lowest taxes after Chennai, India. Even with the BC corporate tax rate rising to 11%, this would remain the third lowest in Canada (only Alberta and New Brunswick’s rates are lower). Again, there remains room to increase corporate rates without experiencing significant economic consequences. BC’s resource royalties are also far too low, and need to be revisited and raised (something even the business panel reviewing BC’s tax regime last summer acknowledged, but which last week’s BC Budget left untouched).

It is worth noting that the BC government’s gimmick of limiting the upper-income tax increase to two years, while perhaps making the move more politically palatable for its base, is bad public policy. With an end-date in sight, the wealthy can take advantage of various means to defer their income until the top tax rate returns to 14.7%, thereby undermining the ability of the new tax to raise as much revenues as it should. New upper-income tax rates should be made permanent as quickly as possible.

The shifting mix of BC tax revenues

Much remains to be done to restore fairness to BC’s overall tax system.

The last decade of tax policy has fundamentally shifted the mix of sources of provincial revenues. The BC personal income tax system remains mildly progressive, meaning, as household income rises, so too does the tax rate. But, as seen in the Figure below, because income taxes have been cut, the province’s reliance on income tax revenues have dropped by one third over the last decade, so much so that income taxes now raise about the same amount as sales taxes. And notably, the provincial treasury now collects more from Medical Service Plan premiums than it does from corporate income taxes (and the chart doesn’t even capture 4% increases in MSP premiums in 2013 and now proposed again for 2014). 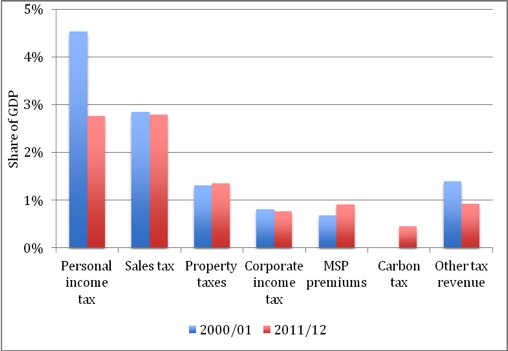 Source: Calculations by CCPA economist Iglika Ivanova based on BC Financial and Economic Review – July 2012, Table A2.5.

All in all, over the past decade, BC has witnessed a number of core shifts in how it raises revenues:

BC Government has a revenue problem, not a spending one

Underlying BC Budget 2013 is a core reality the government has been forced to finally confront – 12 years of corporate and income tax cuts have cost the BC treasury too much. They have starved us of collective revenues that we’ve badly needed to maintain and enhance public services.

Sure enough, we can all point to government spending choices we feel ill-advised (taxpayer-funded ads being right up there). But these examples mask the overall reality that government spending has fallen from 21.7% of GDP in 2000/01 to 19.5% of GDP in 2011/12, a drop of 2.2% of GDP. The proposed 2013 BC Budget would see this drop further to 17.9% of GDP in 2015/16. That means spending has fundamentally failed to keep pace with our needs as a growing society and with our collective ability to pay.

Each time we are confronted with a news story about underfunding:

All ought rightly to be understood as our tax cuts at work.

Indeed, a string of budget deficits is itself a legacy of tax cuts. As the CCPA calculated in our recent tax paper, if BC taxed today at the same rates that prevailed in the year 2000, the public treasury would be $3.5 billion richer. If BC’s personal income taxes were comparable to the average of Canadian provinces, the BC treasury would have an additional $2.4 billion, surpassing the size of the deficit even at the height of the recent recession.

This government’s failing has not been over-spending. Rather, it has been a conscious effort to reduce revenues, thereby limiting the options of what we can achieve together.

Your BC income taxes are lower than you think