The early and fatal undermining of TransLink

Pete McMartin wrote an excellent column in the Vancouver Sun documenting the many ways that the provincial government has undermined TransLink. 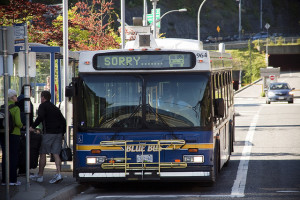 The upcoming referendum isn’t the first but rather the culmination of a two decade, tragically effective, bipartisan effort to prevent TransLink from doing what it was originally set up to do and what the region desperately wants — providing the public transportation infrastructure and services that will meet the region’s growing needs in an economically efficient, socially responsible and environmentally sustainable way.

When TransLink was first established it replaced a completely dysfunctional arrangement where the region planned what transit services to provide but the province determined what its total budget would be. It set up the classic conflict between one group (the mayors) saying what they wanted and another party (the province) deciding what they could do. The result was lots of ambitious planning of what to do but not nearly enough actually being done.

TransLink was to change all that. GVRD and the provincial government agreed that the region would assume responsibility not only for planning what transit and other regional transportation facilities and services to provide but also how they would be paid for.  And in the TransLink agreement they were given a wide range of revenue-raising powers to do just that.

The region was determined to significantly improve public transportation in accordance with the well developed and highly regarded Long Term Transportation and Liveable Region Plans. Regional politicians recognized that new sources of revenues were required and had settled on a vehicle levy in the order of $75 per year as the major new source. All of the provincial and regional financial modelling of what TransLink could and would do were based on a levy like that being implemented.

Regional politicians were ready to take the political heat to fund major improvements in public transportation. The only problem was that provincial politicians wouldn’t let the region do what it was mandated and challenged to do.

The opposition Liberals at that time led the charge against the vehicle levy arguing, despite all evidence and common sense, that new revenues weren’t needed. There were undefined other ways to pay for major new transportation investments and services.

And then the governing NDP, despite the agreement it sought and entered into, followed the politically popular Liberal anti-tax rhetoric and effectively reneged on the most fundamental element of the powers it had bestowed on TransLink. It made it impossible for TransLink to impose and enforce the collection of the planned vehicle levy which all parties to the TransLink negotiations recognized was required to generate the revenues needed to make the improvements everyone wanted.

There are so many things wrong with the upcoming referendum. It forced the regional mayors to come up with the most politically expedient tax and expenditure plan. It invites right wing anti-tax groups to obscure the fundamental question that needs to be addressed.  It invites people to fall back on the essentially juvenile fantasy that major investments and service improvements can be made without new sources of revenues.

But mostly what is so wrong about the current referendum is that it never should have been required. The provincial government just had to let the region do what it was set up to do. The undermining of TransLink started early and TransLink never recovered.

TransLink Funding and Governance (Yet Again)