The disconnect between economic growth and teachers’ wages

A number of recent articles on the BC teachers’ strike have suggested that teachers could get the wage increases they want to see, as well as the needed investments in reducing class size and improving class composition, if only they supported resource development.

Jordan Bateman of the Canadian Taxpayers Federation summed up the line of argument (and took a jab at teachers’ math skills) in his recent blog post title “Simple math for teachers: economic growth = higher wages”.

But does it actually work in practice?

Let’s take a look at what has happened to economic growth and teachers’ wages post-recession.

The BC economy was in recession in 2009, but it has grown in every year since then. Adjusting for inflation and population growth, real per-capita GDP has increased in every year since 2010 and is projected to continue to grow in the next few years (historical data from BC Stats, forecasts from BC Budget 2014 p. 84).

What about going forward? As you can see in the chart below, the current wage increases proposed by the BCTF are well below the BC government’s real per capita growth forecasts in every year except 2014/15. If the contract were signed today, by the end of the contract in 2017 BC teachers can expect a 3% decline in the purchasing power of their wages from 2010. And all that while BC enjoys real per capita growth of 8% over the period. 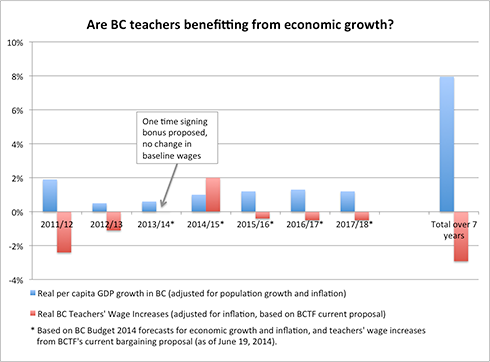 This chart does not include the one time signing bonus that’s also on the table if a contract is signed before June 30th because it does not increase baseline wages. The BCTF is asking for $5,000 but even that won’t even come close to bridging the gulf between economic growth and teachers’ wages.

It turns out economic growth has had very little to do with teachers’ wages in this bargaining cycle and the one before it.

There’s no mechanism in the economy to ensure that growth benefits everyone. The distribution of the gains from growth across sectors and individuals within them hinges on the relative bargaining power and the ability of workers to organize. And that’s precisely why we’ve seen such a dramatic rise in income inequality over the last 30 years.

It turns out the real world is not as simple as the Taxpayers Federation would have you believe.

Why teachers are still striking