Yet another report, this time by SFU Public Policy Professor Dominique M. Gross, finds evidence that Canada’s Temporary Foreign Worker Program is bad for domestic workers. The report looks at BC and Alberta specifically and concludes that the expansion of the TFW program between 2007 and 2010 resulted in an increase in unemployment levels by 4.8 percentage points in BC and 3.1 percentage points in Alberta. You can read the full report here or see Tara Carman’s article about it in the Vancouver Sun here.

This report confirms what I found in my recent CCPA report, BC Jobs Plan Reality Check. Despite slow job creation, the number of temporary foreign workers in BC grew by 28% in just four years, between December 2008 and December 2012 (the latest numbers available).

Fully 29% or close to one-third of net new jobs created in BC since the recession were filled with temporary foreign workers. This is considerably higher than the Canadian average of 15%.

And while the BC Jobs Plan aimed to create jobs in all regions of the province, the reality is that many of the jobs created outside of urban areas were filled with temporary foreign workers. The statistics show that virtually all new foreign workers who came to BC between December 2011 and December 2012 worked outside of BC’s census metropolitan areas of Vancouver, Abbotsford, Kelowna and Victoria (see chart below). In fact, the increase in foreign workers outside BC’s major urban areas exceeded the new jobs created there in 2012. 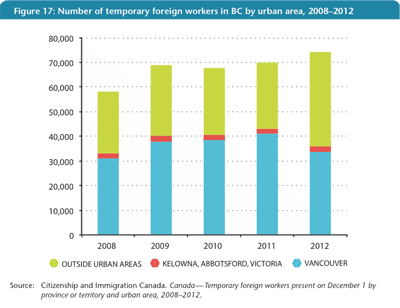 It seems clear that the TFW program has been a boon to employers directly at the expense of lower skilled workers and youth, who are struggling with high unemployment levels. It’s time for meaningful reform to ensure Canadian workers aren’t shut out of job opportunities.

Temporary Foreign Worker Program changes – who do they help?