Shortchanging public sector workers is bad for BC

Public sector workers are in the midst of difficult contract negotiations with the BC government. The workers are reportedly asking for wages to keep up with inflation, but the government hasn’t been willing to come to the table with an offer that reflects the rising cost of living. Public sector workers who have been keeping critical services and institutions running through the pandemic deserve a fair deal.

When it comes to inflation, some will try to pin the blame on rising wages themselves as the cause. Should we be concerned that rising wages are driving the recent increase in inflation? The reality is just the opposite as analysis by my colleagues David Macdonald and Jim Stanford have shown.

Wages in Canada have been falling behind inflation, and they have fallen particularly far behind for public sector workers. Continuing to hold public sector wages down would mean eroding the standard of living for those workers, as well as undermining the recruitment of teachers, health care workers and early childhood educators, among many others. It would do little to ease key inflation drivers like the housing shortage, international oil prices and food supply shocks (or to rein in record corporate profits).

BC has plenty of budgetary room to maneuver

Can decent public sector raises be accommodated in BC’s provincial budget? They very much can.

The provincial budget projects moderate but declining deficits over the next three fiscal years. These estimated levels of deficit are already economically manageable as they stand, and there is reason to believe they may turn out to be substantial overestimates.

Wages in Canada have been falling behind inflation, and they have fallen particularly far behind for public sector workers.

Over the past two decades, BC governments (regardless of their political stripe) have developed a habit of underestimating the budgetary resources available to them. This is an intentional effort to “under-promise and over-deliver” by achieving smaller deficits (or larger surpluses) than projected. In the past two years, deficits have been roughly $7 billion and $9 billion smaller than projected, respectively (and when the numbers are finalized for the most recent year, this gap will likely grow).

This practice of budget lowballing has played out in all but four of the past 20 years, creating a systematic bias against public spending and distorting democratic debate about BC’s budgetary priorities. 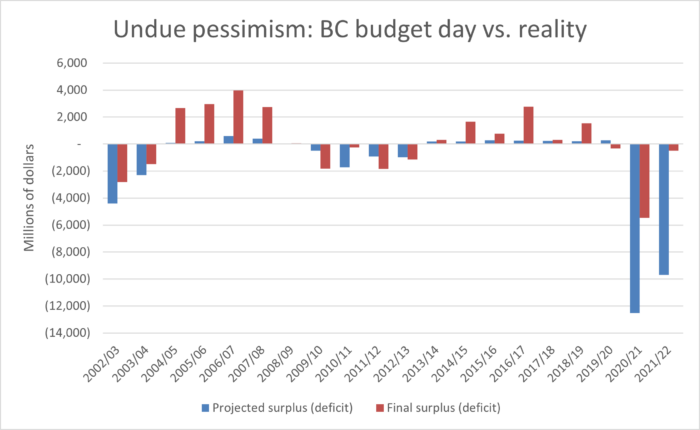 Figure 1. Note: The small year-end deficit for 2021/22 shown in the figure is the latest projection from the Ministry of Finance’s Third Quarterly Report. The final year-end balance is not yet available though there is a strong possibility it will show a surplus.

Fiscal padding is built into the budget in part by the inclusion of large contingency funds and forecast allowances. These alone amount to a whopping $16.2 billion over the next three fiscal years that are projected in Budget 2022. Notably, these unallocated dollars are more than the cumulative projected deficits of $12.8 billion over the same three years.

In addition, these aren’t the only forms of fiscal padding that are built into BC budgets. Others include regularly lowballing expected royalty revenues from resources such as gas and lumber and always assuming lower levels of economic growth than the economic forecast council projects.

All of this budgetary padding illustrates, among other things, that cost-of-living increases for public sector workers are reasonable and affordable. Consider, hypothetically, what the cost would be of five per cent pay increases each year for three years for all unionized provincial public sector workers (let’s call this a “5-5-5” deal). If we accept the Ministry of Finance estimate reported in the Vancouver Sun, a one per cent pay increase for these workers would cost $310 million per year (coming from the employer, this estimate may be on the high end). This would imply that a 5-5-5 deal would have a cumulative outlay over three years of roughly $9.6 billion.

The practice of budget lowballing creates a systematic bias against public spending and distorts democratic debate about BC’s budgetary priorities.

The bottom line is that a fair pay increase for public sector workers could be easily covered by the $16.2 billion in contingency and forecast allowances. But this doesn’t tell the full story of the additional economic and fiscal capacity that BC has available—capacity that could be put towards both decent pay for workers and increased investments in a range of urgent social and environmental priorities, such as tackling the housing crisis, strengthening our education system, investing in health and seniors care, expanding public transit, ending toxic drug deaths and raising income assistance rates, among others.

To get a better sense of the possibilities, consider the longer-run trends in BC government operating spending as a share of our total economic output, or GDP. The most-recent BC Budget 2022 plans for a continued decline in operating spending as a percentage of GDP, which is projected to be 19.2 per cent in 2023/24 and fall further to 18.7 per cent the next year (keep in mind this assumes that the large contingency funds in the budget are spent in full, otherwise these figures would be even lower).

This represents a significant drop in BC’s operating spending levels compared to two decades ago. To put it in more concrete terms, if we returned spending to 1999/2000 levels, which was 21.5 per cent of GDP, the provincial government would have about $8.5 billion more available in the upcoming fiscal year (and rising each year from there) to spend on badly needed social and environmental investments. 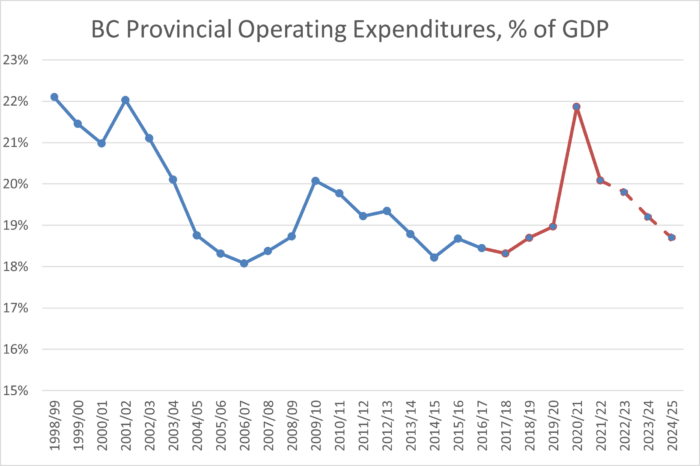 In other words, BC has the economic capacity to raise revenue and invest more in the public good. This observation is not particularly controversial. Even credit rating agencies like Moody’s note: “British Columbia’s level of taxation is at the lower end of the Canadian provinces, providing flexibility to raise taxes… while still remaining competitive with other jurisdictions.” Revenue can be efficiently and equitably raised with taxes that focus on the rich, including wealthy landowners, and large corporations.

Inflation and the budget

Another concern might be that high inflation somehow undermines the provincial government’s budgetary room to maneuver.  This concern is misplaced. When inflation rises, the real (inflation-adjusted) value of the province’s debt falls. Nominal GDP increases faster than usual, easing the debt-to-GDP ratio that credit rating agencies monitor. In addition, BC’s debt-to-GDP ratio was already lower than almost every other province. Amid higher-than-expected inflation, provincial revenue from sales taxes and corporate taxes will also tend to be higher in nominal terms than originally projected.

It’s true that interest costs for new provincial borrowing will rise somewhat with recent rate hikes from the Bank of Canada. But much of the existing debt is already locked in at low rates for terms of 10, 20 or 30 years. It’s also true that Bank of Canada interest rate hikes could provoke a recession in the next year or two, but this would only strengthen the case for increased public expenditure as economic stimulus. A recession would also likely mean a rapid pivot to interest rate cuts is right around the corner.

Shortchanging public sector workers is wrong, unnecessary and counterproductive. All BC workers who have been through the trials and hazards of the pandemic deserve a pay raise—and certainly not an inflation-adjusted pay cut. On this front, the provincial government should lead by example.

BC has the economic capacity to raise revenue and invest more in the public good.

The province ought to offer decent wage settlements to all the workers it employs, such as in education, health care, community social services and core government functions. In addition to setting a good example as an employer, the province should do more to raise wages for frontline workers in the private sector by increasing the minimum wage in line with the real level of inflation that British Columbians are facing. The government took a step in the right direction earlier this year by promising to peg the minimum wage to inflation going forward. But it got off on the wrong foot by using an outdated inflation number from last year (2.8 per cent) rather than having the adjustment reflect the substantially higher levels of inflation that workers are facing today.

BC needs a thriving public sector that invests in its workers to tackle the big challenges of our time. Recruiting an adequate number of teachers, health care workers and early childhood educators has already become a stumbling block. Letting their too-low pay be further eroded by inflation would only make things worse. Leaving our public sector workers out in the cold today would mean courting disaster for the future of our most important public services and institutions, as well as the broader BC economy (and the same goes for federal public sector workers who are also in contract negotiations).

One encouraging sign is that eight public sector unions – the BC General Employees’ Union, BC Teachers’ Federation, CUPE BC, Health Sciences Association, Hospital Employees’ Union, MoveUP, Professional Employees Association, and United Food & Commercial Workers — are sticking together to fight for a fair deal. As a province, we have the economic and fiscal capacity to both provide decent pay increases and increase public investments to help meet the major challenges of our time.

BC’s public sector: among the smallest in the country