Much of the media coverage of the Quebec student protests has dismissed the protestors as cranky middle and upper-middle class children trying to protect their unfair privilege.

And in fact, the vast majority of today’s university students do come from relatively well-off families. But rather than weakening their position, this supports the protestors’ claims that we have a serious problem with access to education – a problem that would only be exacerbated by tuition hikes.

Instead of recognizing this, most media commentary perpetuates a discourse of austerity, demanding that students share the pain that other public service users are suffering.

Here are seven reasons why we would all be better off if we increased public investment in higher education and reduced the burden that high tuition fees impose on students and their families.

The evidence is clear: university education is a route to considerably higher lifetime earnings and the returns to university degrees have increased over the last 20 years. In fact, education is the greatest equalizer we have. It’s the most reliable path to social mobility in a modern society with a knowledge-based economy. Yet, in this time of sharply rising income inequality, this ladder to a better life isn’t accessible to all Canadians. This is both unfair and socially unjust.

Merit and a desire to learn should determine who goes to university. When the ability to pay becomes a deciding factor, then our country loses the chance to benefit from the skills and capabilities of many of its citizens. And because financial barriers to education reduce social mobility, inequality and poverty will increase, with all the associated social and economic costs to society, including increased health and justice system costs and worsening social tension.

3. Questions of access to education are more important today than ever before because higher education is increasingly becoming a standard job requirement.

While a couple of generations ago university may have been a luxury reserved for the children of the wealthy, in today’s world advanced education has a growing impact on people’s ability to compete in the labour market, on the types of jobs they obtain, and the incomes they are able to earn.

The BC government’s own estimates show that over this decade (2010 to 2020), about 35 per cent of new job openings will require university-level education, while 42 per cent are projected to require non-university post-secondary education, college or trades certificates. In contrast, occupations that require a high-school diploma or lower education will account for less than a quarter (22 per cent) of total projected job opportunities. The figures for Canada as a whole are very similar.

Yet, instead of increasing financial support for higher education, governments have steadily withdrawn from funding universities. 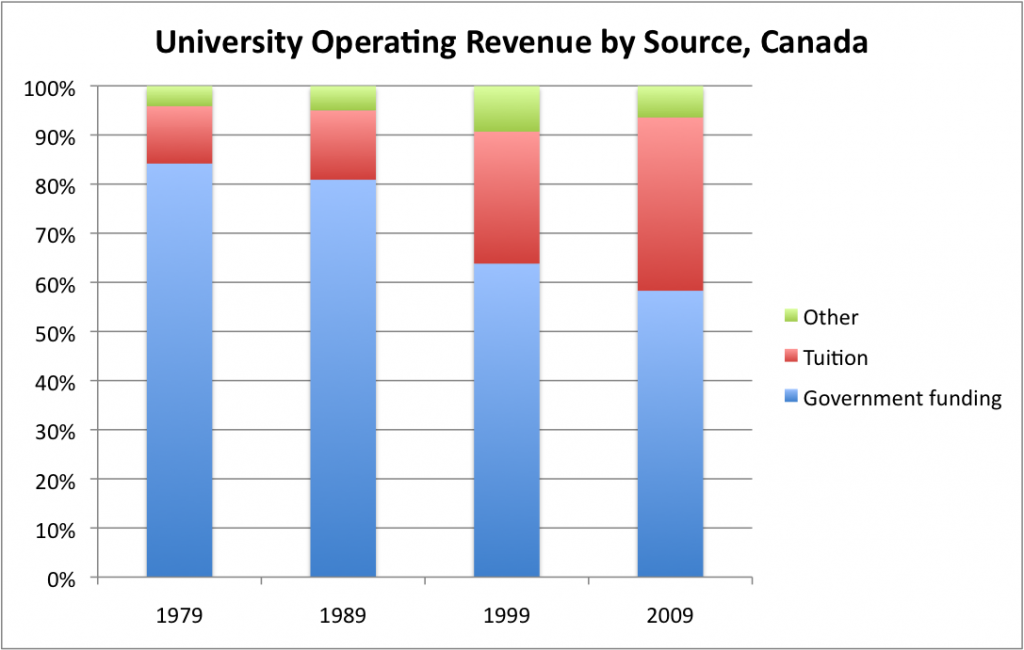 It’s time to start considering funding higher education through the public purse and making it available to all Canadians the way we do with elementary and secondary education.

We know this because students from lower income backgrounds continue to be underrepresented in universities despite the availability of student loans. Instead of improving access to education, student loans result in high debt loans for those few youth from lower and modest income families who manage to make it to university against the odds. The average student debt at graduation from a Bachelor’s degree program was $27,000 in 2009.

This is fundamentally inequitable, because it means that students who take out loans end up paying considerably more for the same education (through interest on their debt) than their peers whose parents can afford the tuition fees up front. In addition, Statistics Canada analysis shows that student debt continues to affect Canadians’ finances long after graduation with borrowers less likely to have savings and investments, and less likely to own their homes.

5. An educated society benefits everybody, not just the people who go to university.

An educated and highly skilled workforce is widely viewed as a crucial element for the continued economic and social growth and development of Canada. Higher education has an important role to play in developing the human capital needed by communities to succeed in the knowledge economy. For example, innovation and knowledge creation in an economy are linked to a strong research and development sector, drawing on the abilities of highly trained individuals.

The benefits of education go beyond increased job skills and earning potential; education provides people with the critical thinking skills they need to be active and confident participants in our communities, and in our democratic society. Better educated people participate more actively in their communities, have higher voter turnout rates and volunteer more – activities that make Canada a better place to live for all.

6. The fact that individuals gain from having higher education is not sufficient reason to rely on tuition (i.e. user fees) to finance education.

High school graduation also confers considerable earnings advantage over those who drop out, yet we don’t fund public schools through a user fee model. Why? Because the social and economic benefits of having a larger majority of the population with at least high school education outweighs the costs of our investment. The same case can be made for post-secondary education in today’s economy.

The tuition hikes we’ve seen over the last decade across Canada, which are now making their way to Quebec only perpetuate the problem: they increase the barriers faced by lower-income youth and ensure that only the children of the wealthy can afford to go to university. So if you don’t want to see scarce public dollars benefiting mostly students from affluent families, you should advocate for policies that increase the representation of lower-income students on our university campuses.

7. Education is a great investment for our public dollars: students repay the full cost of their education through taxes over their working careers.

In other words, education is a sound financial investment for our public dollars. That’s on top of all the social and economic benefits that will accrue from improving access to education.

Low tuition fees do not mean that hose who benefit from education get a free ride (they don’t!). It just means that instead of asking university graduates to pay the costs of their education up front, we’re asking them to pay once they start reaping the payoffs of their education. It’s a fairer way to recoup our public investment in education, and one we should consider adopting. We’ll have a healthier, better educated and more equitable society if we did.