Vancouver is now a “city of millionaires”, according to Environics’ 2016 Wealthscapes report:

In B.C., the red-hot real estate market fueled a rise in average net worth, producing Canada’s first “city of millionaires”: Vancouver. In 2015, the average net worth of Vancouver households hit $1,036,202 – an impressive 7.1 percent increase over the previous year.

You are forgiven if you don’t feel like breaking out the champagne. Measuring average net worth (assets owned less debts) hides a highly unequal distribution of wealth. When prices go up, there are both winners and losers – windfall gains to owners but a worsening situation for those not in the housing market.

In fact, we probably should not be celebrating at all when we look more closely at how surging housing prices have exacerbated inequality in Vancouver. Most of the time when we talk about inequality we are talking about differences in annual income. But the distribution of wealth (real estate and financial assets, mostly) is much more unequal.

In 2012, the last data year of Statistics Canada’s Survey of Financial Security, we can see that the top quintile (i.e. top 20%) of BC households (ranked by net worth) owned just under three-fifths (59%) of the value of principal residences (figure below cropped from my May 2016 housing report, Getting Serious About Affordable Housing). We also have to consider mortgage debt, and when we adjust for that, the top 20% owned 68% of housing net worth. The next 20% do somewhat better than their share of population, with 23% of housing net worth. In contrast, the bottom 60% of the distribution have little or no housing wealth – only 9% of housing net worth. 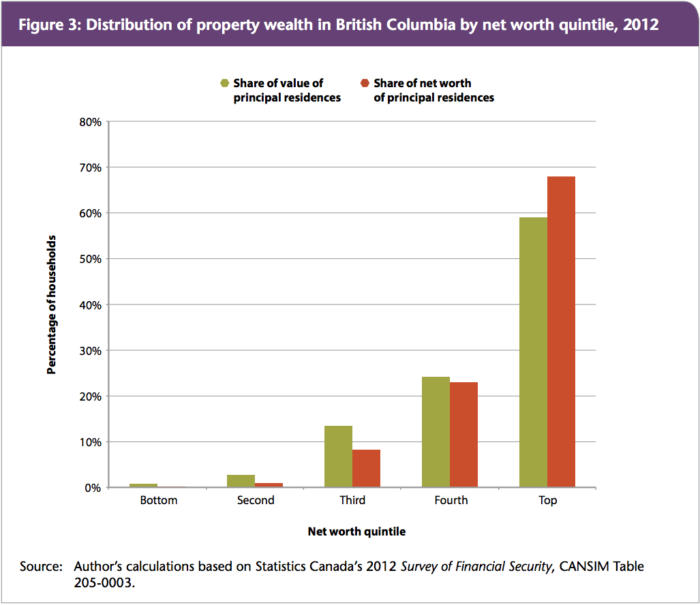 Not shown, but also important, are holdings of “other real estate” (secondary residences, “cabins” or investment properties). In this category, the top 20% hold 82% of asset value.

Over time, we can see how soaring housing prices—and windfall capital gains accruing to homeowners—are widening the gap between rich and poor. Between 1999 and 2012, those in the top quintile saw an average gain of $339,500 per household, while for the next quintile the average gain was $205,300 per household (increases of 83% and 85% respectively).

Note that these data are for BC as a whole. If data were available just for Metro Vancouver, the surge in real-estate-led inequality would be much higher, and higher still if we consider price increases between 2012 and 2016. For example, the MLS “composite benchmark” home in Metro Vancouver jumped 51% in value between 2012 and 2016 (higher for single-family homes, lower for condos).

For homeowners, the surge in housing prices is like winning the lottery. Meanwhile, those who have no stake in the real estate market (one-third of Metro Vancouver households are renters) gain nothing, and are placed even further to the outside. Most of the change in fortunes arising from real estate is pure luck, not skill or effort. To make matters worse, capital gains on principal residences are not taxable, as they would be if they were earned though work. Indeed, there are many cases where real estate gains are larger than several years of employment income.

For many, these property wealth gains only exist on paper, to be realized should they sell their home. Still they constitute a “wealth effect” where inflated asset values underpin higher levels of consumption. Moreover, the increase in paper wealth means that homeowners can borrow against that equity, thus providing a higher level of economic security against bad times.

Amid rising prices, incentives for developers have favoured construction of new ownership units (luxury condos!) rather than rental units. With more households priced out of home ownership and almost no purpose-built rental stock, we are seeing record low vacancy rates for rental units and higher rents. This knock-on effect in the rental market hits an already vulnerable demographic: median net worth for renters was a mere $21,000 in 2012, compared to $511,000 for owners with a mortgage, and $990,000 for owners without a mortgage.

The Environics Wealthscapes report comments that “relying on real estate to fuel net worth growth in Vancouver may need to be reconsidered .. [because] the recent land transfer tax on foreign nationals may dampen demand for real estate in the future.” Whether prices come back down, and by how much, remains to be seen. But even those who have benefitted from windfall gains are concerned about what this all means for the next generation and the vitality of the city in the future.

These trends highlight the need for a more rational management of housing in the interests of regular people. We need to stop treating housing primarily as an investment. All levels of government need to commit to build new housing stock (both rental and ownership) on a large-scale, and to lock it in as affordable. And this building program should be financed by taxing some of the windfall gains to homeowners, through measures such as a progressive property tax or income taxation of capital gains upon sale.

This is a major shift from the developer-driven model that dominates today. But our research shows that it can and should be done.

Rising housing costs in Vancouver: New evidence from the Census